Toshimitsu Deyama (出山利三, Deyama Toshimitsu?, born October 10, 1965 in Tateyama, Japan), better known by his stage name Toshi (currently stylized as ToshI and previously in all capital letters), is a Japanese singer and musician. He is best known as vocalist and co-founder of the heavy metal group X Japan. The band elevated to legendary status in Japan, until its disbanding in 1997. Toshi then went on to have an extensive solo career. In 2007 X Japan reunited, they are currently on their ongoing world tour.[1][2]

Toshi started his solo career in 1992. On February 17, 1997 he married actress, model, and singer, Kaori Moritani, also known as Wanku. In June he first saw a concert of Toru "Masaya" Kurabuchi, a musician and the leader of an organization called Home of Heart. Toshi was emotionally touched by Masaya's "healing music", and in August the two met and became friends. On September 22, it was announced that Toshi decided to leave X Japan. They performed their farewell show at the Tokyo Dome on December 31. Much has been made of Toshi's departure, including allegations of Home of Heart being a cult and that he was being influenced by it. Toshi refuted such claims, stating that his decision to leave X Japan dated back as far as April 1996, more than a year before he met Masaya, and that the glamorous, success-oriented life of a rock star failed to satisfy him emotionally, as opposed to a simpler life and career. 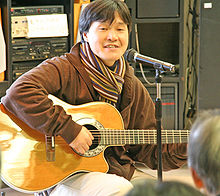 In early 1998 Toshi decided to donate all his money to a charity owned by Masaya. But Toshi's older brother, who was in charge of his finances, refused claiming that Toshi had been "brainwashed" and a lawsuit followed.

After X Japan, Toshi devoted his professional career to "healing music", traveling across Japan and other countries to perform acoustic concerts for small audiences under Home of Heart, Ltd.. According to their website he has performed over 3000 shows. He has released a large amount of material: around 33 albums and singles from 1992 up until 2004. When on April 20, 2004, Lemuria, another organization owned by Masaya which also specializes in "healing music", was brought up on charges of child abuse. Toshi was involved in the court cases as a witness. After the charges were announced, Toshi decided to take a break and didn't release any material.

With X Japan's restart came a restart of Toshi's solo activities. On June 11, 2008 Toshi's new band Toshi with T-Earth was announced. The first line-up included Phantasmagoria guitarist Jun, and guitarist Touya and bassist Ruka from the band Charlotte. For their live shows they would switch between La'cryma Christi's drummer Levin and Luna Sea's drummer Shinya. Their first album Earth Spirit was released on August 8, they dubbed their music "eco hard rock", as the reason for starting the band was to draw attention to the environment. In Ocotber T-Earth performed two shows in South America, in Chile and Brazil. Their second album Haruka Naru Toki wo Koete, was released on November 26.[3]

In April 2009, it was announced that 13 year old drummer Riku, would be joining the group and that anyone who wanted to could apply to join, the only requirement was "people who want to save the Earth". In July, 18 year old guitarist Ryo and 24 year old bassist Kain officially joined the band. On August 13, they released an album in 2 versions: Hontou no Ai and its English version, Truth.[3]

On January 18, 2010, Toshi filed a lawsuit against his record company Home of Heart, Ltd., accusing them of claiming all of his income over the past 12 years, eventually forcing him to announce bankruptcy.[4] Effectively severing ties with the company and its leader Masaya. He also divorced his wife Kaori Moritani, who had also been working for Home of Heart, Ltd., in February of the same year. Toshi even disclosed how they "effectively have not been husband and wife" saying: "Aside from having met her occasionally related to work, I do not know anything about her actual life." Toshi also claims that she had been living with Masaya for the past 10 years.[4]

On February 8, Toshi opened a new official website, which announced that he would release one last mini album, entitled Samurai Japan, on February 24. The website, album and merchandise all have his name written as ToshI, possibly suggesting that Home of Heart, Ltd. has the rights to his previous stage name. The songs were completely composed and produced by Toshi and feature X Japan's Pata and Sugizo. His "last solo concert" was on February 24, which he performed with X Japan's members as guest musicians.

On November 22, Toshi announced the first performance of his new project, entitled ToshI feat. Yoshiki, would be held on January 24 and 25, 2011. It was a high-end dinner show, where the attendees were served a French meal by renowned chef Mikuni Kiyomi, and enjoyed a piano duet by Toshi and Yoshiki, an orchestra was also utilized. It was also announced that the duo would release their first songs earlier that month.[5]

In response to the 2011 Tōhoku earthquake and tsunami that occurred in Japan on March 11, Toshi performed eight concerts throughout western Japan. All of the shows were acoustic due to the electricity shortage and featured X Japan's Heath, Luna Sea's Shinya and the Orchestra Ensemble Kanazawa. All proceeds were donated to the Japanese Red Cross to aid the victims.[6] On June 22, Toshi released two singles, "Hoshizora no Neptune" and "Haru no Negai", as digital downloads that are available overseas.[7] It was announced that Toshi had joined European record label Bishi Bishi in September 2011.[8]

When Toshi first went solo in 1992, his music was uplifting rock with a lot of ballads, but after X Japan's disbandment and his joining of "Home of Heart, Ltd.", it became almost entirely acoustic. Since 1998, Home of Heart's leader Masaya wrote all of his music, which they refer to as "healing music".

His newer band, Toshi with T-Earth (created in 2008), played a type of music (also completely written by Masaya) they called "eco hard rock". Although the lyrics were not always about the environment, the objective of the band was to draw attention to environmental issues.

In 2010, after announcing the he would be ending his solo activities, Toshi released Samurai Japan, which he wrote, produced and arranged himself.