Chase is a village located in the Interior of British Columbia, Canada. It has a population of roughly 2,500, and its main industries are forestry and tourism. It is located at the outlet of Little Shuswap Lake, which is the source of the South Thompson River. Chase Creek, which drops over three small waterfalls before flowing through the town, enters the South Thompson just below the lake's outlet. 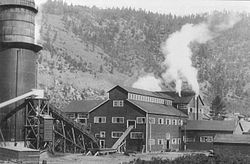 The town of Chase was named after Whitfield Chase, an American from New York State who arrived in the area in 1867 after coming to Canada during the Fraser Canyon Gold Rush. He was the first non-native settler who farmed and raised a family in what was then called the Shuswap Prairie. He married a young Secwepemc girl who was 25 years his junior. Her name was Per-soons, but when they married she changed her name to Elizabeth. His head cowboy Filemon deLeenheer married Elizabeth's sister, Cimmenak. Whitfield and Elizabeth raised ten children together. The town was named in honour of Whitfield Chase although the community did not exist until more than 10 years after his death.[1]

An American logging company first came to the area in 1907 and purchased what became the original town site from Whitfield's heir. They subdivided the land into lots, installed water and electricity and sold the lots to workers and business people. For the location of the mill, they leased approximately 70 acres (280,000 m2) of land from the Chase family that bordered the Thompson River near Little Shuswap Lake.

Chase grew slowly over the next few decades with only a small core of permanent residents. It was not until incorporation in 1969 that the community began to market itself as a tourist destination and people began to explore the area. The community, as a result, saw an increase in population with visitors to the area returning to live, work and retire. Chase also benefited from the construction of the Coquihalla Highway in the mid-1980s.