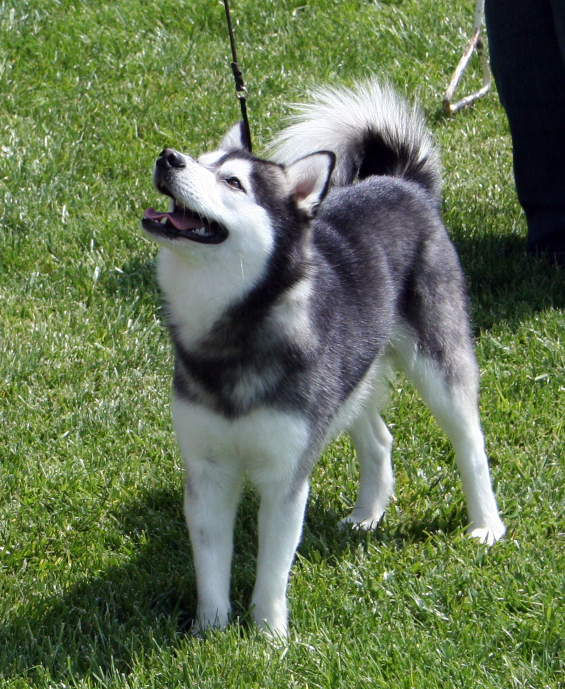 image_caption = A Standard Sized AKK
name = Alaskan Klee Kai
altname = Klee Kai
nickname = AKK
country =
ukcgroup = Northern Breeds
ukcstd = http://mail.ukcdogs.com/UKCweb.nsf/80de88211ee3f2dc8525703f004ccb1e/1891ba1f65e6287d85257049006ad306?OpenDocument The Alaskan Klee Kai is a northern breed of dog of type. The term "Klee Kai" was derived from Alaskan words meaning "small dog". The breed was developed to create a companion sized version of the (although it more closely resembles the Siberian Husky), resulting in an energetic, intelligent, apartment-sized dog with an appearance that reflects its northern heritage.

Alaskan Klee Kai come in four main color varieties. Black and White, which can appear with stark contrasts or with a more dilute diffusion of the colors. Grey and White, which comes in several variations. Red and White (rare) which appears either as a cinnamon or a dark auburn. Solid white which, lacking the contrasting colors required by the UKC standard, cannot be registered or bred. They also will very rarely come in tri-color but is not acceptable for the show ring.

The Alaskan Klee Kai, like the Siberian Husky, is relatively easy to care for. They are extremely clean. Most don't like wet feet and will spend hours daily grooming themselves. They do not have a "doggy odor" nor do they have "dog breath." Most Klee Kai will seldom require a bath.

As in Siberians and unlike short haired dogs who shed all year long, the Klee Kai also blows their coat twice a year. Of course, the size of the dogs limit the amount of fur blown. It is best to groom the dog on a regular basis during this time. Some of the longer haired dogs can become matted if not groomed. Most Klee Kai will assist the loss of hair by rubbing against things such as fences.

Other than this period of blowing coat, the Klee Kai is very self sufficient. The normal preventative measures should be taken, such as trimming of nails, normal grooming in the form of brushing. This process is especially important in the bonding process.

The Alaskan Klee Kai is a highly intelligent, very curious, active, quick and agile little dog that quickly become an integral part of any family that chooses to adopt one. Unlike the Siberian Husky whom they resemble, the Alaskan Klee Kai is standoffish and suspicious of strangers. Because of this they do make extremely good watch dogs. They are moderately active and have a high prey drive. This means unless they are properly introduced and raised with smaller furry or feathered animals such as rabbits, hamsters, cats, birds, etc, they will hunt and kill them. They can be a great family dog if raised with properly raised children. AKK are not likely to tolerate being mistreated (poked at, pinched, bullied) by children and may respond by nipping them, much like the Siberian Husky. Because of their intelligence they do well in obedience classes and have a high drive to please their owners which helps them to excel in this area as well as many other types of activities. Another such activity is Agility in which the AKK almost seems to have been bred to take part in. If you have an Alaskan Klee Kai that is highly active, this is a great way to help them use some of that up.

Alaskan Klee Kai have been remarkably free of genetic defects in comparison to other breeds.

Some issues that do affect them however are:

Starting with Linda Spurlin, Alaskan Klee Kai breeders continue to follow her strict breeding practices, breeding only the healthiest dogs to each other. Most people will find it very difficult to buy an AKK puppy that does not come with a spay or neuter contract. This is done to prevent backyard breeding of dogs who, for one reason or another, were deemed not acceptable for breeding. This is not always the case however, many AKK breeders simply prefer that their puppies go into loving pet homes instead of show/breeder homes. To make sure that they remain a beloved pet and will never be used for breeding, the AKK breeder still requires them to be altered.

The breed was developed in during the mid-1970s by Linda S. Spurlin after she observed the result of an accidental mating of an Alaskan Husky and an unknown small dog. The breed was developed with Siberian and Alaskan Huskies using and to bring down the size without dwarfism. She bred these dogs in private until she released them to the general public in 1988. Originally called the "Klee Kai", the breed split into "Alaskan Klee Kai" and "Klee Kai" for political reasons in 1995. The breed consolidated under the new name in 2002. The Alaskan Klee Kai was officially recognized by the (ARBA) in 1995 and by the (UKC) on , .