High Huts of the White Mountains

High Huts of the White Mountains

Greenleaf Hut on the shoulder of Mount Lafayette

The High Huts of the White Mountains are a series of eight mountain huts in the White Mountains, in the U.S. state of New Hampshire, owned and maintained by the Appalachian Mountain Club. Modeled after similar huts in the Alps, they are positioned at intervals along the Appalachian Trail, allowing "thru-hikers" (those who hike the entire Appalachian Trail) to benefit from their services. They are generally separated by six to eight miles, about a day's hike.

Hikers can reserve overnight bunks at the huts, which hold from 36 to 90 people each. In summer season (June through mid-September) the huts are "full service", serving dinner and breakfast. Three huts stay open the rest of the year as "self service", allowing guests to cook their own food in the kitchen.

The huts are maintained by a team of five to nine caretakers - often called "the croo," using that spelling[1] - during full-service season. Each crew member works for eleven days on, three days off. During the eleven working days, they must make four trips back down the mountain to get perishable food and other supplies, carrying heavy loads. At the beginning of each season, fuel and supplies are flown into the huts by helicopter.

Although extremely popular, the huts are also controversial, facilitating thousands of hikers entering the back woods and environmentally sensitive areas above tree line. Four years and an environmental impact statement were required to get the huts' permits renewed by the U.S. Forest Service in 1999.

In describing the huts' relative positions, "south" and "north" refer to location along the AT, though the trail runs roughly from west to east through the White Mountains. The following huts are presented in "south" to "north" order.

Construction on Greenleaf (44°09′37″N 71°39′37″W﻿ / ﻿44.1603°N 71.6604°W﻿ / 44.1603; -71.6604﻿ (Greenleaf Hut)) was completed in 1930 and was the first hut project to use a team of burros to carry materials. Greenleaf was also the first hut in the system with running waters and indoor toilets, which symbolized the shift in concept from that of the huts being simple shelters to that of the huts being more of a mountainside hostel. The design on Greenleaf — a central dining room and kitchen flanked by two bunkrooms — became the model for Galehead and Zealand Falls, both constructed within the next year. This hut was also the first to leave behind the stone and masonry construction technique utilized by earlier huts. Much of the funding for the construction of the hut came from Colonel Charles Greenleaf, for whom the hut is named. Guests at Greenleaf enjoy spectacular views of Franconia Ridge due to the hut's position on a prominent shoulder of Mount Lafayette. Greenleaf is the third highest hut in the system and is tied with Lonesome Lake Hut for the fourth highest capacity. Lonesome is also the hut's closest southern neighbor, with Galehead Hut to the north.[4][5]

Construction on Galehead hut (44°11′16″N 71°34′08″W﻿ / ﻿44.1879°N 71.5688°W﻿ / 44.1879; -71.5688﻿ (Galehead Hut)) began in 1931, using wood from the surrounding trees. It was completed in 1932, along with Zealand Falls Hut, its closest northern neighbor. Originally, the hut used the small space under the front porch to store perishable foods. In 1938, the hut gained a temporary 360 degree view when the Great New England Hurricane blew over all the surrounding trees. The building itself survived the storm, but it could not last indefinitely — in June 2000, a brand-new Galehead opened to the public. The new hut included provisions to make it compliant with the Americans with Disabilities Act including a wheelchair ramp, even though it is 5 miles (8 km) by a rough trail from the nearest trailhead.[6] As the hut is located nearly 4,000 feet (1,200 m) above sea level and five miles from the nearest trailhead, the vast majority of the building materials had to be carried in; thus mainly lightweight materials were utilized. Despite this challenge, new features for the hut included composting toilets (already in use at Mizpah Spring Hut, Carter Notch Hut, and Lonesome Lake Hut), solar panels and a wind vane to produce power with little environmental impact, and the ability to withstand winds up to 125 mph (200 km/h). The latter was accomplished by fastening the foundation to the granite groundrock through drilling and grouting rebar. The hut is located on the rugged Garfield Ridge and is located 0.9 miles (1.4 km) from South Twin Mountain and 0.5 miles (800 m) from Galehead Mountain. The hut is tied with Mizpah Springs Hut for the fourth highest hut and sleeps the second lowest number of people. Greenleaf hut is the closest hut to the south.[7][8][9]

Lakes of the Clouds Hut

The highest, largest, and most popular hut in the system, Lakes of the Clouds Hut (44°15′32″N 71°19′08″W﻿ / ﻿44.2588°N 71.3190°W﻿ / 44.2588; -71.3190﻿ (Lakes of the Clouds Hut)) started as a shelter built in 1901 in response to the deaths in the previous year of two hikers caught in a storm on their way to an AMC meeting atop Mount Washington. Fourteen years later it was rebuilt as a hut, and has since been renovated at least five times — in 1922, 1927, 1947, 1969 and 2005. Despite its position as the highest of the huts, it is also the most easily accessible due to its proximity to the summit of Mount Washington, accessible both by car and by the Mount Washington Cog Railway, a popular tourist attraction. It is located adjacent to its namesake Lakes of the Clouds—two small alpine tarns — and just below the 5,372 ft (1,637 m) summit of Mount Monroe. The hut is the largest of the AMC chain: It provides bunks for 90 hikers. Because of its size and popularity, it is known as "Lakes of the Crowds". Mizpah Spring Hut is the closest hut to the south and Madison Spring is the closest hut to the north.[14][15] 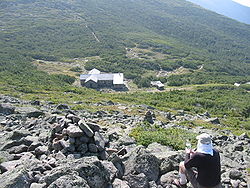 It is the second highest hut in the chain, and sleeps the third highest number of guests. The hut is accessed most directly from the Valley Way Trail (from the Appalachia parking lot). It is generally considered the most difficult of the full-service huts to access, based on distance and elevation required to reach it. To the south is Lakes of the Clouds Hut and to the north is Carter Notch Hut.[17][18]

Carter Notch Hut (44°15′33″N 71°11′44″W﻿ / ﻿44.2591°N 71.1955°W﻿ / 44.2591; -71.1955﻿ (Carter Notch Hut)) is the easternmost hut in the system[19] and is open year-round. Between 1996 and 2006, it operated on a self service basis; since then it has resumed operating as a full service hut during the summer season, remaining self-service the rest of the year.[20][21] The site's use as a shelter began in 1904 as a simple log cabin; the building was rebuilt as a hut in 1914, making Carter Notch the oldest building in the hut chain. There are two bunkhouses located a short distance from the main hut structure; thus from the cliffs above, the hut is viewed as a small compound. There are two small ponds located nearby, as well as a tremendous boulder field. Both are results of an 1869 landslide that ravaged nearby Carter Dome's north slopes. Carter Notch helped establish the hut as a viable pursuit for the AMC, and after its initial success, the group began to lay plans for a hut system. Currently, a nearby cave is used to store cheese, butter, and other perishables. It has both the third lowest altitude and the third lowest capacity of any hut. Its closest southern neighbor is Madison Spring Hut.[22][8]