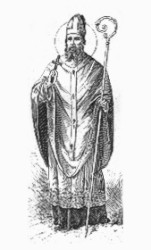 Augustine of Canterbury, OSB (born c. first third of the 6th century - died 26 May 604) was a who became the first in the year 598. He is considered the "Apostle to the English"

Augustine was the of a monastery in Rome when Saint Gregory the Great chose him in 595 to lead a mission to Britain to convert the pagan King Æthelberht of the to . Kent was probably chosen because it was near the Christian kingdoms in and because Æthelberht had married a Christian princess, Bertha, daughter of the King of Paris who was expected to exert some influence over her husband. Before reaching Kent the missionaries had considered turning back but Gregory urged them on and, in 597, Augustine landed on the Isle of Thanet and proceeded to Æthelberht's main town of Canterbury.

King Æthelberht converted to Christianity and also allowed the missionaries to preach freely, giving them land to found a monastery outside the city walls. Augustine was consecrated bishop of the English and converted many of the king's subjects, including thousands during a mass baptism on Christmas Day in 597. Pope Gregory sent more missionaries in 601, along with encouraging letters and gifts for the churches, although attempts to persuade the native Celtic bishops to submit to Augustine's authority failed. Roman Catholic bishops were established at London and Rochester in 604, and a school was founded to train Anglo-Saxon priests and missionaries. Augustine also arranged the consecration of his successor, .

Augustine died in the year 604 and was soon revered as a .

Background to the mission

After the withdrawal of the Roman legions from the province of Britannia in 410, the natives of the island of were left to defend themselves against the attacks of the Saxons. Before the withdrawal Britannia had been converted to Christianity and had even produced its own heretic in . After the legions left, pagan tribes settled the southern parts of the island, but Western Britain, beyond the Anglo-Saxon kingdoms, remained Christian. This native British Church developed in isolation from Rome under the influence of missionaries from Ireland.

It was against this background that Pope Gregory I decided to send a mission to convert the to Christianity in 595.

The choice of Kent and Æthelberht was probably dictated by a number of factors, including the fact that Æthelberht had allowed his wife to worship freely. Trade between the Franks and Æthelberht's kingdom was well established, and the language barrier between the two regions was apparently only a minor obstacle, as the interpreters for the mission came from the Franks. Another reason for the mission was the growing power of the Kentish kingdom. Since the eclipse of King in 592, Æthelberht was the leading Anglo-Saxon ruler; , an eighth-century monk who wrote a history of the English church, refers to Æthelberht as having (overlordship) south of the River Humber. Lastly, the location of Kent near the Franks allowed support from a Christian area.

In 595, Gregory chose Augustine, who was the prior of the abbey of St Anthony in Rome, to head the mission to Kent.

Sources make no mention of why Pope Gregory chose a monk to head the mission. Pope Gregory once wrote to Æthelberht complimenting Augustine's knowledge of the , so Augustine was evidently well-educated. Other qualifications included administrative ability, for Gregory was the abbot of St Anthony as well as being pope, which left the day-to-day running of the abbey to Augustine, the prior.

Augustine was accompanied by , his eventual successor to the ric, and a group of about 40 companions, some of whom were monks.

Augustine established his at Canterbury.

Soon after his arrival, Augustine founded the of Saints Peter and Paul, which later became ,

After these conversions, Augustine sent Laurence back to Rome with a report of his success along with questions about the mission.

Further missionaries were sent from Rome in 601. They brought a for Augustine and a present of sacred vessels, s, s, and books. The pallium was the symbol of metropolitan status, and signified that Augustine was now an archbishop. Along with the pallium, a letter from Gregory directed the new archbishop to ordain 12 s as soon as possible and to send a bishop to . Gregory's plan was that there would be two metropolitans, one at York and one at London, with 12 suffragan bishops under each archbishop. As part of this plan, Augustine was expected to transfer his archiepiscopal see to from Canterbury. The move from Canterbury to London never happened; no contemporary sources give the reason,

In 604, Augustine founded two more bishoprics in Britain. Two men who had come to Britain with him in 601 were consecrated, as and as .

Augustine failed to extend his authority to the Christians in and to the west. Gregory had decreed that these Christians should submit to Augustine and that their bishops should obey him.

Easier to implement were Rome's mandates concerning pagan temples and celebrations. Temples were to be consecrated for Christian use,

Gregory legislated on the behaviour of the laity and the clergy. He placed the new mission directly under papal authority and made it clear that English bishops would have no authority over Frankish counterparts nor vice versa. Other directives dealt with the training of native clergy and the missionaries' conduct.

claims Augustine as its founder, which would make it the world's oldest existing school, but the first documentary records of the school date from the 16th century. [cite web |url=http://www.kings-school.co.uk/document_1.aspx?id=1:31887&id=1:31658&id=1:31637 |title= 597 and all that: A Brief History of the King’s School, Canterbury |accessdate=2008-03-31 |publisher=The King's School, Canterbury] Augustine did establish a school, and soon after his death Canterbury was able to send teachers out to support the East Anglian mission.

Before his death, Augustine consecrated as his successor to the archbishopric, probably to ensure an orderly transfer of office.

Augustine's body was originally buried in the portico of what is now St Augustine's, Canterbury,

Today, a Celtic cross marks the spot in , , where Augustine is said to have landed,