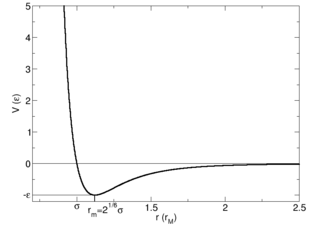 A graph of strength versus distance for the 12-6 Lennard-Jones potential.

The r−12 term, which is the repulsive term, describes Pauli repulsion at short ranges due to overlapping electron orbitals and the r−6 term, which is the attractive long-range term, describes attraction at long ranges (van der Waals force, or dispersion force). Whereas the functional form of the attractive term has a clear physical justification, the repulsive term has no theoretical justification. It is used because it approximates the Pauli repulsion well, and is more convenient due to the relative computational efficiency of calculating r12 as the square of r6. The Lennard-Jones (12,6) potential is an approximation to the (exp-6) potential later proposed by R. A. Buckingham, in which the repulsive part is exponential:[2]

The L-J potential is a relatively good approximation and due to its simplicity is often used to describe the properties of gases, and to model dispersion and overlap interactions in molecular models. It is particularly accurate for noble gas atoms and is a good approximation at long and short distances for neutral atoms and molecules.

The lowest energy arrangement of an infinite number of atoms described by a Lennard-Jones potential is a hexagonal close-packing. On raising temperature, the lowest free energy arrangement becomes cubic close packing and then liquid. Under pressure the lowest energy structure switches between cubic and hexagonal close packing.[3] Real materials include BCC structures as well.[4]

There are many different ways of formulating the Lennard-Jones potential The following are some common forms.

This form is a simplified formulation that is used by some simulation software packages:

. This is the form in which Lennard-Jones wrote the 12-6 potential.[5]

To save computational time, the Lennard-Jones potential is often truncated at a cut-off distance of rc = 2.5σ, where

, the truncated potential is set to zero.

To avoid a jump discontinuity at

, the LJ potential must be shifted upward a little so that the truncated potential would be zero exactly at the cut-off distance,

denote the LJ potential as defined above, i.e.,

Then the truncated Lennard-Jones potential

is defined as follows [6]

It can be easily verified that VLJtrunc(rc) = 0, thus eliminating the jump discontinuity at r = rc. Although the value of the (unshifted) Lennard Jones potential at r = rc = 2.5σ is rather small, the effect of the truncation can be significant, for instance on the gas–liquid critical point.[7] Fortunately, the potential energy can be corrected for this effect in a mean field manner by adding so-called tail corrections.[8]