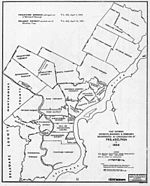 Map of Philadelphia County prior to the Act of Consolidation.

The Act of Consolidation, more formally known as the act of February 2, 1854 (P.L. 21, No. 16), was enacted by General Assembly of the Commonwealth of Pennsylvania and approved February 2, 1854 by Governor William Bigler. This act consolidated all remaining townships, districts, and boroughs within the County of Philadelphia, dissolving their governmental structures and bringing all municipal authority within the county under the auspices of the Philadelphia government. Additionally, any other unincorporated communities were included in the consolidation. The consolidation was drafted to help combat lawlessness that the many local governments could not handle separately and to bring in much-needed tax revenue for the city.

The passage of the act gave the city and the county the same borders; that is, it made the two entities coterminous. This situation is shared by a number of combined cities and counties in the United States, with notable examples including Denver, Colorado; San Francisco, California; Jacksonville, Florida; Indianapolis, Indiana; Louisville and Lexington in Kentucky; New Orleans, Louisiana; and Nashville, Tennessee. Though both city and county (or, in the case of New Orleans, city and parish) co-exist as legal entities, most governing functions are in the hands of the city government. One notable exception is that the county has a sheriff's department, though its duties are limited and subordinate to the Philadelphia Police Department.

One of the major reasons put forth for the consolidation of the city was the county's inability to govern.[3] Law enforcement found it difficult to enforce the peace. A person could break the law in Philadelphia and quickly cross the border and escape punishment. Districts outside Philadelphia could not control their criminal elements and at the same time refused to let Philadelphia get involved. An example of how poorly law enforcement agencies worked together was in May, 1844 when an anti-Catholic riot erupted in Kensington. The sheriff was the only police officer available in Kensington at the time and when Philadelphia's militia was called they hesitated because they hadn't been reimbursed for past calls. By the time the militia arrived, the riot was out of control. Attempts to improve the issue included an 1845 law that required several of the surrounding districts to maintain adequate law enforcement and an 1850 act that gave Philadelphia law enforcement the authority to police seven surrounding districts.[1]

The other major reason for consolidation was that Philadelphia's actual population center was not in Philadelphia, but north of Vine Street. Between 1844 and 1854 Philadelphia's population grew by 29.5 percent. Places like Spring Garden grew by 111.5 percent, and Kensington by 109.5 percent. This population shift was draining the city of much-needed tax revenue for police and fire departments, water, sewage, and other city improvements.[4]

There had been several unsuccessful proposals at consolidation before 1854. The main opposition of consolidation came from the Whig Party. The Whigs usually dominated Philadelphia elections while the outlying districts were dominated by the Democrats and the Whigs feared they would lose power within the city.[1] With support from all the city's major newspapers, the consolidation overcame Whig opposition and the issue was brought to the Pennsylvania General Assembly.

Eli Kirk Price brought the issue to the Pennsylvania Senate while Matthias W. Baldwin and William C. Patterson brought it to the House of Representatives. A bill was produced on December 20, 1853 and by January 31, 1854 the bill had passed both houses. The bill was then brought to Governor William Bigler, who was in Erie, Pennsylvania. Bigler was awoken out of bed before midnight on February 2 and signed the bill into law. The signing was rushed because several districts were considering assuming new debts for railroad loans and other projects with the expectation that the consolidated city would pay them.[4]

On March 11 there was a large celebration for the consolidation. Governor Bigler, members of the legislature, and chief officers of the state visited the city for the celebration. Events included an excursion on the Delaware River, a ball at the Chinese Museum and a banquet at the Sansom Street Hall the next day.[4]

The following is a list of municipal authorities which were consolidated into the City of Philadelphia.[6]