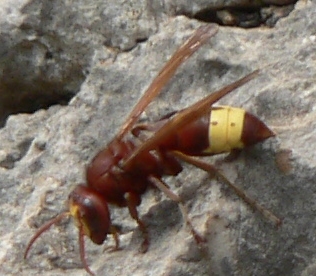 Hornets are the largest eusocial s, that reach up to 45 s (1.8 inches) in length. The true hornets make up the genus "Vespa", and are distinguished from other s by the width of the vertex (part of the head behind the eyes), which is proportionally larger in "Vespa"; and by the rounded s (the section of the behind the wasp waist).

The genus "Vespa" comprises about 20 , most of which are native to tropical and desert southern , but there is a species found across from Britain to , the European hornet ("V. crabro"), and another, the Oriental hornet ("V. orientalis"), that extends via southern and central Asia to the , up to northern and eastern and the (including southern and ). The European hornet "V. crabro", was accidentally introduced to in 1840 and is now present in many eastern regions; it is the only true hornet in North America. [ [http://www.ento.psu.edu/extension/factsheets/european_hornet.htm "European Hornet - Penn State Entomology Department Fact Sheet"] , ento.psu.edu] As of 2003, its geographical range extends from the west to the , and south to and . [ [http://www.ento.psu.edu/extension/factsheets/european_hornet.htm "European Hornet - Penn State Entomology Department Fact Sheet"] , ento.psu.edu] Another occurs in temperate eastern Asia, the Yellow hornet ("V. simillima"), and some tropical species also range as far north as , , or . The Asian giant hornet ("V. mandarinia") is a native of temperate and tropical Asia.

In "", the nest is founded in spring by a fertilized female, known as the "queen". She generally selects sheltered places like dark hollow tree trunks. She builds a first series of cells (up to 50) out of chewed tree bark. The cells are arranged in horizontal layers named "combs", each cell being vertical and closed at the top. An egg is then laid in each cell. After 5-8 days it hatches, and in the next two weeks the larva undergoes its five stages. During this time the queen feeds it a protein-rich diet of insects. Then the larva spins a silk cap over the cell's opening, and during the next two weeks transforms into an adult, a process called "metamorphosis". Then the adult eats her way through the silk cap. This first generation of workers, invariably females, will now gradually undertake all the tasks that were formerly carried out by the queen (, nest building, taking care of the brood, etc) with one exception: egg-laying, which remains exclusive to the queen.

As the colony size grows, new combs are added, and an envelope is built around the cell layers, until the nest is entirely covered, with the exception of an entry hole. At the peak of its population the colony can reach a size of 700 workers. This occurs in late summer.

At this time the queen starts producing the first reproductive individuals. Fertilized eggs develop into females (called "" by entomologists), unfertilized ones into males (sometimes called "drones"). Adult males do not participate in nest maintenance, foraging, or caretaking of the larvae. In early to mid-autumn they leave the nest and mate during "s". Males die shortly after mating. The workers and queens survive at most until mid to late autumn; only the fertilized queens survive over winter.

Other temperate species (e.g. the yellow hornet, "V. simillima", or the Oriental hornet, "V. orientalis") have similar cycles. In the case of tropical species (e.g., "V. tropica"), life histories may well differ; and in species with both tropical and temperate distributions (such as the , "Vespa mandarinia"), it is conceivable that the cycle depends on latitude.

The workers accomplish a variety of tasks during the colony's lifetime. These include:
* Foraging. Workers feed mainly on carbohydrate-rich fluids such as tree sap. They also hunt other insects, primarily flies but also other species including smaller wasps and bees; they have been known to attack dragonflies. After subduing the prey, the hornet may discard all nutrient-poor parts such as the wings, legs, head, and/or abdomen. This leaves only the thorax with the protein-rich flight muscles, which constitutes the main food of the larvae. On hot days, workers will bring water to the nest and deposit it on the envelope, thus cooling the interior.
* Expanding and rearranging the nest. This includes building new combs and new cells.
* Feeding the larvae. On returning back to the nest, masticated prey flesh is fed to the larvae, which have higher protein needs (for growth) than the workers, since they no longer grow. The larvae, in turn, produce a nutrient fluid, rich in s, which is consumed by the adults, especially the queen.

A hornet's sting is painful to humans, but the sting toxicity varies greatly by hornet species. Some deliver just a typical insect sting, while others are among the most venomous known insects.

;European hornet sting
* in itself is not fatal except sometimes to allergic victims.

;Non-European hornet sting
* in itself is not fatal except sometimes to allergic victims.

;All hornet stings
* are an allergen for people with an allergy to wasp venom.
* those allergic to wasp venom are not "necessarily" allergic to bee venom as they contain different chemicals.
* contain less volume of venom than a .
* are primarily for killing insect prey.
* are more painful than a typical wasp's due to a large amount (5%) of . [cite journal | author=K. D. Bhoola, J. D. Calle, and M. Schachter | title=Identification of acetylcholine, 5-hydroxytryptamine, histamine, and a new kinin in hornet venom (V. crabro) | journal=J Physiol. | year=1961 | volume=159 | issue=1 | pages=167–182] See . [cite web|url=http://www.discover.com/issues/jun-03/features/featstung/|title=Stung – How tiny little insects get us to do exactly as they wish]

As in all stinging wasps, hornets can sting multiple times—they do not die after stinging a human, as is typical for a worker , as the sting is not barbed (the honey bee stinger has evolved for defending the nest against s/s). They can also bite and sting at the same time.

Hornets, like many social wasps, can mobilize the entire nest to sting in defense: this is highly dangerous to humans. The hornet alarm pheromone is used to raise alarm of nest attack, and to identify prey, for example bees [cite web|url=http://pubs.acs.org/cen/critter/8137hornets.html|title=Volatile fragrance chemicals may attract unwanted attention from hornets and bees] . It is not advisable to kill a hornet anywhere near a nest, as the distress signal can trigger the entire nest to attack. Materials that come in contact with pheromone, such as clothes, skin, dead prey or hornets, must be removed from the vicinity of the hornets nest. Perfumes, and other volatile chemicals can be falsely identified as pheromone by the hornets and trigger attack.

Hornets and yellowjackets prey on many insects that are considered to be pests, so are actually beneficial. They do also prey on bees, but unlike honey bees, hornet and yellowjacket colonies die out every winter.

Hornets and other Vespidae

While taxonomically well-defined, there may be some ambiguity about the differences between hornets and other wasps of the family , specifically the s, which are members of the same subfamily. Yellowjackets are generally smaller than hornets and are bright yellow and black, whereas hornets may be darker in color - see wasp and bee characteristics.

Some other large wasps are sometimes referred to as hornets, most notably the ("Dolichovespula maculata") found in North America. It is set apart by its black and ivory coloration. The name "hornet" is used for this and related species primarily because of their habit of making aerial nests (similar to the true hornets) rather than subterranean nests. Another example is the ("Abispa ephippium"), which is actually a species of .