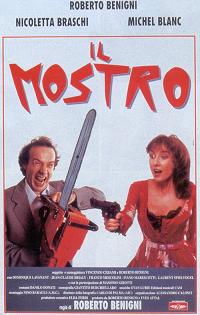 "Il Mostro" ("The Monster") is a 1994 Italian . It starred as a man who is mistaken by police profilers for a due to a misunderstanding of the man's strange behavior. The film is rated R by the MPAA "for language and some sexual humor." This film was, at the time it came out, the highest-grossing film in Italy, bested later by another Benigni film, "".

Loris (Roberto Benigni) is a part-time mannequin handler for a department store. He hopes to learn the in order to get an assistant manager position. He lives in a building where he hasn't paid the rent in months, and he also owes money to other people around town.

At a party, Loris is told about a nymphomaniac who will sleep with anyone. Loris approaches the wrong woman, who runs away and tells the police. Because of his odd behavior, Loris becomes the chief suspect in a series of /murders. The chief of police, frustrated by the lack of solid evidence against Loris, resolves to provoke Loris's passion and catch him "red-handed." An attractive police officer, Jessica () goes undercover as his roommate, and is directed by the police chief and the police doctor, Paride, to dress provocatively in order to entrap Loris.

After a few days living in his apartment, Jessica begins to doubt Loris really is the killer. The police doctor, however, is convinced that Loris is on the brink of committing his 19th rape/murder. Paride visits Jessica's apartment on the pretext of fitting Loris for a suit. He performs all sorts of medical tests and Loris remains clueless, thinking he really is being fitted for a suit.

Loris goes to interview at the Chinese company. His teacher gives him a little Chinese good luck charm, and Jessica sees this. Loris bombs the interview, unable to answer the very first question correctly.

Jessica is about to give up on the case when Paride brings her a Little Red Riding Hood costume and says the police chief orders her to put it on. Paride is certain this will unleash Loris' "erotic urges." Jessica does as instructed but Loris remains unmoved to rape or murder anyone. Jessica is back at the police station when they get news that the serial killer has struck again. At the crime scene, Jessica finds the Chinese good luck charm and connects it to Loris' Chinese instructor. She goes to the Chinese language teacher's house, where she finds both Loris and the teacher. She instructs a uniformed police officer to release Loris, then she calmly directs the real killer to a squad car. The film concludes with Loris and Jessica kissing and then walking off into the sunset.

TV and newspaper film critics in the United States were generally dismissive of this film. According to , this film gets a "rotten" 33% rating on the "critics' tomatometer." James Brundage at filmcritic.com writes of this film that "It's childish, it's fun, and you can get it without understanding a single word of Italian... well, maybe not the third part but you still don't have to use your brain all that much." [James Brundage, [http://www.filmcritic.com/misc/emporium.nsf/ddb5490109a79f598625623d0015f1e4/ce9f70bc36822b75882567dc000a5cfc?OpenDocument The Monster (1994) Review] ]

Chris Hicks of "Deseret News" was much less impressed by this film: "But after about an hour, Benigni and his film have worn out their welcome — and there's still almost an hour to go." He's surprised that "this movie was a monster hit — the biggest moneymaker in Italian movie history." [Chris Hicks, [http://deseretnews.com/movies/view/1,1257,1223,00.html The Monster (Il Mostro) Review] "Deseret News" August 23, 1996]

Feminist criticswho find this film offensive to women. Even Jessica, a competent professional woman, is reduced to a sex object to be bait for a serial killer.

Scholars, on the other hand, see the film as "attack on the conformity and “compulsory consumption” brought about by Berlusconi’s media society within a discussion of Benigni’s roots in the Commedia dell’arte and a reflection on the often repeated comparison of Benigni with ." [Maurizio Viano, [http://caliber.ucpress.net/doi/pdf/10.1525/fq.2006.60.1.61 book review of "Beyond Life Is Beautiful: Comedy and Tragedy in the Cinema of Roberto Benigni"] Accessed November 1, 2007] Benigni has also been compared to , with the ending of "The Monster" being compared to the ending of "Modern Times". [cite news
last = Delarte
first = Alonso
coauthors =
title = A monstrous comedy of manners
work =
pages =
language =
publisher = Italian Film blog
date= 2007-10-24
url = http://italianfilm.blogspot.com/2007/10/monstrous-comedy-of-manners.html
accessdate = 2007-11-03 "Their weird crouching walk into the sunset mediates (puts a spin on) the final walk at the end of Modern Times, the only Charlie Chaplin comedy in which his Little Tramp character walks into the sunset with a woman and not by himself."]