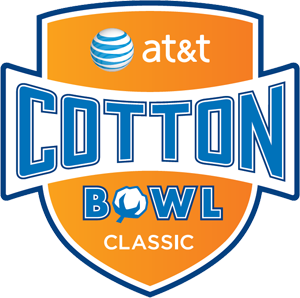 
The Cotton Bowl Classic is a played annually since 1937 at the self-named stadium in . On , it was announced that the game will move to the new Dallas Cowboys Stadium in , in 2010. [cite news | url=http://www.statesman.com/sports/content/sports/stories/longhorns/02/28/28cotton.html | title=Cotton Bowl moves; what about Texas-OU? | publisher=Austin American-Statesman | date= | accessdate=2007-03-24] With the planned move, Cotton Bowl officials also began a campaign to become part of the when the current contract featuring the Rose, Sugar, Fiesta, and Orange bowls expires in 2010.

Since 1996, the game has been sponsored by ; however, it went through several name changes, first in 2000 when the firm adopted a standardized "SBC" branding reflecting its name it adopted in 1995, , and since 2006, after their acquisition of , and its subsequent name change, as the AT&T Cotton Bowl Classic. From 1989 until 1995, the game was sponsored by and known as the Mobil Cotton Bowl Classic.

The Cotton Bowl Classic was founded in Dallas, Texas in 1937 at the Texas State Fair Grounds, when Texas oil executive J. Curtis Sanford financed the first one out of his own pocket. took on Marquette, winning 16-6, but the game lost money even though some 17,000 attended. Nonetheless, Sanford persevered, and in 1938 the game made a profit as Rice defeated Colorado 28-14, in front of a crowd of 37,000.

In 1940, an underdog Clemson team surprised the 6-3, in the first of several appearances at the Cotton Bowl by Tigers coach Frank Howard. Attendance at this game was given as 20,000. Later that year, a group of prominent Dallas citizens took over the staging of the game as the Cotton Bowl Athletic Association. A few months later, the CBAA became an agency of the . From 1941 to 1994, the SWC's champion hosted the Cotton Bowl.

In 1946, the was defeated by the , despite the 4th quarter work of freshman fullback , who was to mature under at the next three years.

In 1947 LSU and Arkansas played in front of 38,000 people to a 0-0 tie in what would later become known as the "Ice Bowl." LSU got the better of Arkansas most of the game but the game truly belonged to the weatherman.

The 1954 Cotton Bowl featured one of the most famous plays in college football history. Rice's Dickey Moegle began a run around from Owl 5 yard line and down the open field. Alabama's Tommy Lewis jumped off the bench and tackled Maegle. The referee Cliff Shaw saw what happened and signaled touchdown even though Maegle was "tackled" at the 42 yard line.

In 1960, defeated the 23-14 to win the . Syracuse was lead by bowl MVP , who ran for one touchdown, caught a still Cotton Bowl record 87 yard touchdown, and intercepted a pass leading to a third touchdown. In 1961, Davis went on to become the first black athlete to win the .

In 1964, the number one ranked University of Texas completed an undefeated season by defeating #2 ranked Navy (led by future quarterback ). The game was played a month and a half after President was assassinated in Dallas. The 1967 game was moved to Saturday, , , due to the hosting the at the stadium on New Year's Day, a Sunday (Note: The other major bowl games that year --- the Rose Bowl, Sugar Bowl, and Orange Bowl --- were played on Monday, ).

The 1970 game featured Notre Dame's return to bowl games after a 45-year self-imposed ban. When the Irish made that decision, 9-1 LSU was overlooked for the game, and the Tigers stayed home instead. The Irish, led by quarterback , faced top-ranked and undefeated Texas. Notre Dame led 17-14 late in the fourth quarter, but the Longhorns scored a late touchdown to clinch a 21-17 victory and an undisputed national championship. The same two teams met the next year, but this time, the Irish ended the Longhorns' 30-game winning streak with a 24-11 victory, denying Texas the national championship (the Longhorns had already clinched the championship in the poll, which did not release a post-bowl poll at the time). Texas and Notre Dame met again in the 1978 game, with the Longhorns again ranked number one, only to see the Irish and quarterback roll to a 38-10 victory. The Irish vaulted from fifth to first in the final polls with the victory.

The , the 1979 Cotton Bowl, featured one of the most historic comebacks in bowl history. Notre Dame trailed the 34-12 midway through the fourth quarter. Thanks to a blocked punt and the brilliance of future NFL hall of famer , the Irish rallied to win 35-34.

The 1989 game between and Arkansas was highly publicized in the Dallas area because UCLA quarterback was expected to be the #1 pick in the NFL draft by the . Much was made of Cowboys coach watching Aikman practice at (UCLA's practice facility for game preparation). Landry never got to draft Aikman, because he was fired the next month, but his successor, Jimmy Johnson, did draft Aikman.

For 40 years the champion of the now-defunct (SWC) played as the home team in the Cotton Bowl, a tie-in which continued through the 1994 season. Until the mid-1980s the contest was universally considered as a major New Year's Day bowl. However, by the late 1980s the Cotton Bowl's prestige was dropping as many SWC teams served NCAA probations for rule violations, rendering them bowl-ineligible. Also, the conference's quality of play suffered a marked decline. The SWC champion lost the last 7 times they hosted the event, and the last national champion to play in the Cotton Bowl was Notre Dame in 1977, although the Irish again staked a claim to a championship after the 1994 contest.

Meanwhile, the , unhindered by conference tie-ins, was attracting national championship contenders, most notably with its January 1987 game between Penn State and Miami. In the minds of many fans, the Fiesta replaced the Cotton as a major bowl. Despite this, the Cotton Bowl still retained enough prestige that it was included as one of the top bowls in the when it was formed in 1992. However, in 1995, the new (the predecessor of today's BCS) chose to include the Fiesta Bowl over the Cotton in its national championship game rotation, sealing the Cotton Bowl's displacement from the four "major bowls."

In 1995, the SWC gave up control of the Cotton Bowl as part of its planned dissolution after the season. In 1996, the became the first team from the (WAC) to play in the game defeating the Kansas State Wildcats 19-15 winning an NCAA record 14th game and finishing the season ranked fifth in the country with a 14-1 record.

Since 1996, the game has been anchored by the . The opponent in the late 1990s was either the or WAC. Since 1999, however, the (usually a Western Division team) with Southwestern Bell (now AT&T) sponsoring the event.

The Cotton Bowl continues to be played on New Year's Day (except when falls on a Sunday; then it is moved to ), and is usually the second game of the day to kick off, generally following the .

"'In the 2008 Cotton Bowl, Missouri Tigers running back Tony Temple broke the bowl game rushing record. He ran for 281 yards in 24 carries. (The record was previously held by Rice's Dicky Meagle, who rushed for 265 yards)Missouri ended up winning against Arkansas 38-7. [ [http://www.attcottonbowl.com/news_room/releases.php?uid=189 2009 AT&T COTTON BOWL CLASSIC ] ] This game was the last Cotton Bowl to ever be played on New Year's Day at the Cotton Bowl stadium.

In 2010, the Cotton Bowl will move to the New Cowboys Stadium in Arlington, leaving the aging Cotton Bowl facility. Reportedly, the Bowl will seek to become a BCS bowl game in 2011. One of the concerns for this game has been the weather since Dallas can be cold in January, but the new stadium would offer top amenities and weather protection. [ [http://sports.espn.go.com/ncf/bowls07/news/story?id=3172508 Cotton Bowl reportedly hoping to join BCS party in 2011] ]

has televised the game since 1999. For many decades, the Cotton Bowl was a New Year's Day staple on , where the man most associated with the game, , handled the play-by-play. transmitted it for a brief period during the mid-1990s. Currently, (best known as the voice of the ) is the radio voice of the Cotton Bowl on the network, and longtime NFL broadcaster has come out of retirement to announce the annual game for Fox.