African dwarf frogs are small aquatic frogs native to parts of Africa, spreading from tropical to subtropical areas primarily in the Congo region.

African dwarf frogs live their entire lives underwater, but need to rise to the surface to breathe air because they have lungs and not gills. These frogs are small in size and do not weigh more than a few ounces. These frogs vary in color, for the most part ranging from olive green to brown with black spots. The average life expectancy of these frogs is 5 years, but they can live as long as 20 and grow to 2½ inches long. When young, African dwarf frogs can be mistaken and sold as African clawed frogs, African frogs of the genus Xenopus, which are larger and more aggressive than the dwarf.

All species of Pipidae are tongueless, toothless and completely aquatic. They use their hands to shove food in their mouths and down their throats and a hyobranchial pump to draw or suck food into their mouth. Pipidae have powerful legs for swimming and lunging after food. They also use the claws on their feet to tear pieces of large food. They lack true ears but have lateral lines running down the length of the body and underside; this is how they can sense movements and vibration in the water. They use their sensitive fingers, sense of smell, and lateral line system to find food. They are scavengers and will eat anything living, dying or dead and any type of organic waste.

These frogs have tiny black claws on their hind legs, which caused one of their discoverers, Oskar Boettger, to originally call them 'African dwarf clawed frogs'.[1] But they quickly lose these black tips in the sharp pebble environment of the average aquarium and are more commonly called 'African dwarf frogs' today.

The African frog habitat in the wild consists of shallow rivers, creeks and ponds during the dry season and in the flooded areas of the forests during the wet season. These creatures prefer eating and playing near the bottom, where they can be safe from predators and hide while they sleep.

Males are slim and will develop a small gland behind each of their front legs; this gland is not very well understood but is believed to play some part in mating. The gland is a small white spot on both sides, a minor outward bulge on both sides of the frog. Males are known to “sing” or “hum” during mating or when excited. Only the males are known to do this, although they will sometimes “hum” even if there is no intention of mating. The females of this species are 40% larger than males when fully mature. They have pear-shaped bodies, as their abdomens will fill with eggs as they reach a mating stage. Another distinction is that females will have a more pronounced genital region, called an ovipositor.

African dwarf frogs mate during what is called amplexus. In amplexus, the male grabs the female around the abdomen just in front of her back legs. The female becomes motionless and her forearms may twitch sporadically. Amplexus usually happens at night after one or more nights of “humming” by the male. During amplexus, the female does all the swimming. The female lays her eggs on the surface of the water, one at a time while towing the male. She will swim to the bottom between layings. The male is fertilizing the eggs during this time by releasing sperm into the water. Amplexus can last for several hours. When the female has laid all her eggs she signals the male to release her by going motionless. After several minutes of being motionless the male will release the female and she will return to her normal behavior.

African dwarf frogs are commonly found as pets. They first became popular in the 1960s and have spread to the pet trade all over the world. They are desirable pets because of their low maintenance requirements compared to other amphibians. African clawed frogs are often sold erroneously as African dwarf frogs. The astute pet owner will recognize the difference, however, because of the following characteristics:

African dwarf frogs are very active and rarely will sit still for any period of time. When stationary, the African dwarf frog has been known to float in one spot, with its legs and arms completely outstretched, resting on one foot. This is a normal behaviour called "burbling". Sometimes they will just float with arms and legs spread out, drifting on the surface. African dwarf frogs are generally peaceful with animals of their own size but their diet sometimes includes smaller animals. Other fish are known to eat the eggs of these frogs. African dwarf frogs spend most of their time eating or playing near the bottom of the water, where they feel safe from predators. Most frogs will sleep up to twelve hours a day, provided there is no potential threat of predators.

It is commonly suggested that these frogs be kept in groups of two or more due to their social nature. A minimum of one gallon per frog is needed to keep these frogs, as they are very active and need the space to move. Despite being fully aquatic, the African dwarf frog still needs to be able to reach the surface to breathe. Very high or deep tanks over 20 inches in height are not recommended. These amphibians are not great swimmers, so water currents should be kept low. Very deep tanks may pose a challenge to their ability to breathe. In the wild, the Congo forest floods yearly to a depth of 24 or more inches. So anything less than that will be suitable. They also should be kept in an enclosure with a secure cover to prevent escape and plenty of hiding spaces as in the wild they tend to be prey to a variety of animals and causes skittish behaviour in open spaces. The optimum water temperature for aquatic frogs is 75–82 °F. The pH value in the tank should be maintained between 6.5 – 7.5. 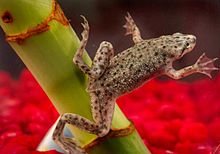 Dwarf frog shown in an aquarium

These frogs come out of the water every once in a while, but they cannot survive for longer than 20 minutes in low humidity as they will dry out.

They are compatible with most bottom feeders and algae eaters. Respectful tropical fish can also be used as tank mates, although aggressive fish will often fight or injure the frogs. As African dwarves are slow eaters, it is not uncommon for tankmates to eat all the food while the frogs go hungry. If this becomes a problem, methods of delivering the food directly to the bottom of the tank (such as with a turkey baster) should be employed to ensure the frogs are adequately fed.

Care should be taken when handling African dwarf frogs, especially when considering them as a pet for young children. These frogs should never be held outside the tank, both for the safety of the frog and as they may be carriers of Salmonella.[2][3]