Estradiol
Not to be confused with 17α-estradiol.

Estradiol (E2 or 17β-estradiol, also oestradiol) is a sex hormone. Estradiol is abbreviated E2 as it has 2 hydroxyl groups in its molecular structure. Estrone has 1 (E1) and estriol has 3 (E3). Estradiol is about 10 times as potent as estrone and about 80 times as potent as estriol in its estrogenic effect. Except during the early follicular phase of the menstrual cycle, its serum levels are somewhat higher than that of estrone during the reproductive years of the human female. Thus it is the predominant estrogen during reproductive years both in terms of absolute serum levels as well as in terms of estrogenic activity. During menopause, estrone is the predominant circulating estrogen and during pregnancy estriol is the predominant circulating estrogen in terms of serum levels. Estradiol is also present in males, being produced as an active metabolic product of testosterone. The serum levels of estradiol in males (14[1] -55[1] pg/mL) are roughly comparable to those of postmenopausal women (< 35[1] pg/mL). Estradiol "in vivo" is interconvertible with estrone; estradiol to estrone conversion being favored. Estradiol has not only a critical impact on reproductive and sexual functioning, but also affects other organs, including the bones.

Conversion of testosterone to estradiol

During the reproductive years, most estradiol in women is produced by the granulosa cells of the ovaries by the aromatization of androstenedione (produced in the theca folliculi cells) to estrone, followed by conversion of estrone to estradiol by 17β-hydroxysteroid dehydrogenase. Smaller amounts of estradiol are also produced by the adrenal cortex, and (in men), by the testes.

Estradiol enters cells freely and interacts with a cytoplasmic target cell receptor. After the estrogen receptor has bound its ligand, estradiol can enter the nucleus of the target cell, and regulate gene transcription, which leads to formation of messenger RNA. The mRNA interacts with ribosomes to produce specific proteins that express the effect of estradiol upon the target cell.

Estradiol is the most potent naturally occurring estrogen.

In plasma, estradiol is largely bound to sex hormone-binding globulin, also to albumin. Only a fraction of 2.21% (± 0.04%) is free and biologically active, the percentage remaining constant throughout the menstrual cycle.[2] Deactivation includes conversion to less-active estrogens, such as estrone and estriol. Estriol is the major urinary metabolite. Estradiol is conjugated in the liver by sulfate and glucuronide formation and, as such, excreted via the kidneys. Some of the water-soluble conjugates are excreted via the bile duct, and partly reabsorbed after hydrolysis from the intestinal tract. This enterohepatic circulation contributes to maintaining estradiol levels.

Serum estradiol measurement in women reflects primarily the activity of the ovaries. As such, they are useful in the detection of baseline estrogen in women with amenorrhea or menstrual dysfunction, and to detect the state of hypoestrogenicity and menopause. Furthermore, estrogen monitoring during fertility therapy assesses follicular growth and is useful in monitoring the treatment. Estrogen-producing tumors will demonstrate persistent high levels of estradiol and other estrogens. In precocious puberty, estradiol levels are inappropriately increased.

During pregnancy, estrogen levels, including estradiol, rise steadily toward term. The source of these estrogens is the placenta, which aromatizes prohormones produced in the fetal adrenal gland.

In the female, estradiol acts as a growth hormone for tissue of the reproductive organs, supporting the lining of the vagina, the cervical glands, the endometrium, and the lining of the fallopian tubes. It enhances growth of the myometrium. Estradiol appears necessary to maintain oocytes in the ovary. During the menstrual cycle, estradiol produced by the growing follicle triggers, via a positive feedback system, the hypothalamic-pituitary events that lead to the luteinizing hormone surge, inducing ovulation. In the luteal phase, estradiol, in conjunction with progesterone, prepares the endometrium for implantation. During pregnancy, estradiol increases due to placental production. In baboons, blocking of estrogen production leads to pregnancy loss, suggesting estradiol has a role in the maintenance of pregnancy. Research is investigating the role of estrogens in the process of initiation of labor. Actions of estradiol are required before prior exposure of progesterone in the luteal phase.

The development of secondary sex characteristics in women is driven by estrogens, to be specific, estradiol. These changes are initiated at the time of puberty, most are enhanced during the reproductive years, and become less pronounced with declining estradiol support after the menopause. Thus, estradiol enhances breast development, and is responsible for changes in the body shape, affecting bones, joints and fat deposition. Fat structure and skin composition are modified by estradiol.

The effect of estradiol (and estrogens) upon male reproduction is complex. Estradiol is produced by action of aromatase mainly in the Leydig cells of the mammalian testis, but also by some germ cells and the Sertoli cells of immature mammals [7]. It functions to prevent apoptosis of male sperm cells.[8]

Several studies have noted sperm counts have been declining in many parts of the world, and estrogen exposure in the environment has been postulated to be the cause.[9] Suppression of estradiol production in a subpopulation of subfertile men may improve the semen analysis.[10]

Males with sex chromosome genetic conditions, such as Klinefelters syndrome, will have a higher level of estradiol.

Estradiol has a profound effect on bone. Individuals without it (or other estrogens) will become tall and eunuchoid, as epiphyseal closure is delayed or may not take place. Bone structure is affected also, resulting in early osteopenia and osteoporosis.[11] Also, women past menopause experience an accelerated loss of bone mass due to a relative estrogen deficiency.

Estradiol has complex effects on the liver. It can lead to cholestasis. It affects the production of multiple proteins, including lipoproteins, binding proteins, and proteins responsible for blood clotting.

Estrogens can be produced in the brain from steroid precursors. As antioxidants, they have been found to have neuroprotective function.[12]

The positive and negative feedback loops of the menstrual cycle involve ovarian estradiol as the link to the hypothalamic-pituitary system to regulate gonadotropins.

Estrogen is considered to play a significant role in women’s mental health, with links suggested between the hormone level, mood and well-being. Sudden drops or fluctuations in, or long periods of sustained low levels of estrogen may be correlated with significant mood-lowering. Clinical recovery from depression postpartum, perimenopause, and postmenopause was shown to be effective after levels of estrogen were stabilized and/or restored.[13][14]

Estrogen is suspected to activate certain oncogenes, as it supports certain cancers, notably breast cancer and cancer of the uterine lining. In addition, several benign gynecologic conditions are dependent on estrogen, such as endometriosis, leiomyomata uteri, and uterine bleeding.

The effect of estradiol, together with estrone and estriol, in pregnancy is less clear. They may promote uterine blood flow, myometrial growth, stimulate breast growth and at term, promote cervical softening and expression of myometrial oxytocin receptors.

Role in sex differentiation of the brain

One of the fascinating twists to mammalian sex differentiation is that estradiol is one of the two active metabolites of testosterone in males (the other being dihydrotestosterone), and since fetuses of both sexes are exposed to similarly high levels of maternal estradiol, this source cannot have a significant impact on prenatal sex differentiation. Estradiol cannot be transferred readily from the circulation into the brain, whereas testosterone can; thus sex differentiation can be caused by the testosterone in the brain of most male mammals, including humans, aromatizing in significant amounts into estradiol. There is also now evidence the programming of adult male sexual behavior in animals is largely dependent on estradiol produced in the central nervous system during prenatal life and early infancy from testosterone.[16] However, it is not yet known whether this process plays a minimal or significant part in human sexual behaviors although evidence from other mammals tends to indicate that it does.[17]

Recently, the volumes of sexually dimorphic brain structures in phenotypical males were found to change to approximate those of typical female brain structures when exposed to estradiol over a period of months.[18] This would suggest estradiol has a significant part to play in sex differentiation of the brain, both prenatally and throughout life.

Estrogen is marketed in a number of ways to address issues of hypoestrogenism. Thus, there are oral, transdermal, topical, injectable, and vaginal preparations. Furthermore, the estradiol molecule may be linked to an alkyl group at C3 position to facilitate the administration. Such modifications give rise to estradiol acetate (oral and vaginal applications) and to estradiol cypionate (injectable).

Oral preparations are not necessarily predictably absorbed, and are subject to a first pass through the liver, where they can be metabolized, and also initiate unwanted side effects. Therefore, alternative routes of administration that bypass the liver before primary target organs are hit have been developed. Transdermal and transvaginal routes are not subject to the initial liver passage.

Ethinylestradiol, the most common estrogen ingredient in combined oral contraceptive pills, is a more profound alteration of the estradiol structure. 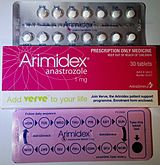 Inducing a state of hypoestrogenism may be beneficial in certain situations where estrogens are contributing to unwanted effects, e.g., certain forms of breast cancer, gynecomastia, transgenderism, and premature closure of epiphyses. Estrogen levels can be reduced by inhibiting production using gonadotropin-releasing factor agonists (GnRH agonists) or blocking the aromatase enzyme using an aromatase inhibitor, such as anastrozole, or with an estrogen receptor antagonist, such as tamoxifen. Flaxseed is known to reduce estradiol.[19]

If severe side effects of low levels of estradiol in a woman's blood are experienced (commonly at the beginning of menopause or after oophorectomy), hormone replacement therapy may be prescribed. Often such therapy is combined with a progestin.

Estrogen therapy may be used in treatment of infertility in women when there is a need to develop sperm-friendly cervical mucus or an appropriate uterine lining. This is often prescribed in combination with clomifene.

Estrogen therapy can also be used to treat advanced prostate cancer, as well as to relieve symptoms of breast cancer.[20][21]

Not all products are available worldwide. Estradiol is also part of conjugated estrogen preparations, such as Premarin, though it is not the major ingredient (Premarin consists of hundreds of estrogen derivatives. As the name indicates, it comes from pregnant mares' urine.)

St John's wort, phenobarbital, carbamazepine and rifampin decrease the levels of estrogens, such as estradiol, by speeding up its metabolism, whereas erythromycin, clarithromycin, ketoconazole, itraconazole, ritonavir and grapefruit juice may slow down metabolism, leading to increased levels in the blood plasma.[22]

Estradiol should be avoided when there is undiagnosed abnormal genital bleeding, known, suspected or a history of breast cancer, current treatment for metastatic disease, known or suspected estrogen-dependent neoplasia, deep vein thrombosis, pulmonary embolism or history of these conditions, active or recent arterial thromboembolic disease such as stroke, myocardial infarction, liver dysfunction or disease. Estradiol should not be taken by people with a hypersensitivity/allergy or those who are pregnant or are suspected pregnancy.[22]