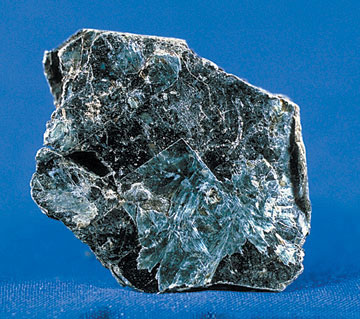 Vermiculite is a natural that expands with the application of . The expansion process is called and it is routinely accomplished in purpose-designed commercial furnaces. Vermiculite is formed by of certain basaltic minerals. Large commercial vermiculite mines currently exist in , , and several other countries.

Vermiculite is a 2:1 , meaning it has 2 sheets for every one sheet. It is a limited expansion clay with a medium . Vermiculite has a high at 100-150 /100g. Vermiculite clays are weathered s in which the K+ ions between the sheets are replaced by Mg2+ and Fe2+ cations.

*moulded shapes, bonded with for use in:
**high-temperature insulation
**refractory insulation
** of structural and pipes
*
*as loose-fill insulation
*packing material, valued for its high absorbency
*suitable as a substrate for various animals and/or of eggs
*lightweight aggregate for , proprietary compounds, mortar and cementitious spray
*as an additive to fireproof
*component of the interior fill for s, along with
*carrier for dry handling and slow release of agricultural chemicals
*soil additive for plants, together with for potted plants
*growing medium for .
*means to permit slow cooling of hot pieces in , , steelwork, and
*used in-ground swimming pools to provide a smooth pool base
*used in commercial handwarmers
*used as a sterile medium for the incubation of reptile eggs
*light-weight insulative concrete [http://sugarmtnfarm.com/blog/2007/09/float-my-concrete-boat.html]
*used in AGA cookers as insulation
*used in explosives storage as a blast mitigant

In 2005, South Africa was the top producer of vermiculite with about 40% world share followed by the USA and China, reports the .

While some exfoliators focus on only a few of the possible applications, others can provide vermiculite products for all its applications. It is common for vermiculite exfoliators to also exfoliate perlite, as both are often sold together. To set up a new exfoliation process, it is possible to find expert consultants to advise in the design and construction of the desired facilities. Vermiculite exfoliators have an international trade association called "The Vermiculite Association" to represent the industry's interests and to exchange information.

For many years, since the advent of the removal business, before which nearly everyone sold asbestos-based spray fireproofing, vendors could be cleanly categorised into users of MMMF (man-made-mineral-fibres), which included both and fibres, and itious sprays, whereby the binder was typically and the lightweight aggregate inside the was vermiculite. For many years, makers of the cementitious products would point out the ill health effects that are possible from overexposure and lack of proper industrial procedures when working with MMMF. Vendors of the MMMF products would point out the possibility of asbestos contamination, particularly with US mined vermiculite ore. Ironically, both sides were defending against s in the asbestos litigation and eventually stopped pointing out these particular weak spots about one another, which makes sense, since most affected s are still in as a means of dealing with the results of the asbestos litigation. One large British manufacturer of asbestos products even had to discontinue selling anything to directly, having to rely on surrogate trading companies for sales to that continent now. Fact|date=November 2007

Although not all vermiculite contains asbestos, some products were made with vermiculite that contained asbestos until the early 1990s. Vermiculite mines throughout the world are now regularly tested for it and are supposed to sell products that contain no asbestos. The former vermiculite mine in Libby, Montana did have asbestos &mdash; in fact, it was found to have developed underground with and to be co-mingled with significant amounts of asbestos.

Pure vermiculite does not contain asbestos and is non-toxic, but it can become contaminated over long periods if there is a presence of a secondary mineral called . After millions of years of weatherization, the turns into vermiculite and the diopside turns into asbestos. This appears to have happened to the vermiculite deposit at the Libby, Montana mine, and numerous people were unknowingly exposed to the harmful dust of vermiculite that contained asbestos. Unfortunately, the mine had been operating since the 1920s, and environmental and industrial controls were virtually non-existent until the mine was purchased by the W.R. Grace Company in 1963. Yet, knowing the potential for human health risks, the mining company still continued to operate there until 1990. Consequently, many of the former miners and residents of Libby had been affected and continue to suffer health problems. Over 200 people in the town died from asbestos-related disease due to contamination from vermiculite mining from nearby Zonolite Mountain, where soil samples were found to be loaded with fibrous (known to be a very toxic form of asbestos), and countless others there who insulated their homes with Zonolite have succumbed to asbestos-related diseases, most of whom never were employed in environments where asbestos was an issue.

After a 1999 story claimed that asbestos-related disease was common in the town, the EPA, in response to political pressure, made cleanup of the site a priority and called Libby the worst case of community-wide exposure to a toxic substance in U.S. history.

Since the 1920s, vermiculite had been extracted from the Libby deposit under the commercial name Zonolite. The Zonolite brand was acquired by the W.R. Grace Company in 1963. Mining operations on the Libby site stopped in 1990 in response to asbestos contamination. While in operation, the Libby mine may have produced 80% of the world's supply of vermiculite.