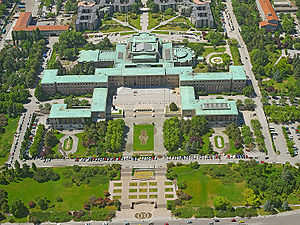 Aerial view of the current Turkish Parliament building in Ankara, designed in 1938 by Clemens Holzmeister

Clemens Holzmeister (27 March 1886 – 12 June 1983) was a prominent Austrian architect and stage designer of the early twentieth century. The Austrian Academy of Fine Arts listed his life's work as containing 673 projects. He is the father of Judith Holzmeister.

Holzmeister was born in the village of Fulpmes in the Tyrol state of Austria. He attended the Vienna University of Technology and earned a doctorate in architecture in 1919. After submitting a prize-winning design, he became the Head of the Architecture Department of Austria's Academy of Fine Arts in 1924. In 1926 he oversaw the remodelling of the Festival Theatre in Salzburg, then spent several years erecting government buildings in Ankara, Turkey.

In 1931 Holzmeister became the Director of the Austrian Academy of Fine Arts. Besides building projects in Austria, Germany and Turkey, he remained the Director of the Academy until being removed from this post during the Anschluss by the new German government in 1938. Although his offices, journals and papers were seized by the Nazis, he had the good luck to be in Turkey on another commission at the time; during which he designed the current Turkish Parliament building (1938) as well as numerous other state buildings. He remained in Turkey until 1954, then returned to Austria, where his 1950s commissions include the Großes Festspielhaus.

His body of work includes a large number of public and semi-public buildings and churches. Among the awards Holzmeister received during his life are the Grand State Prize of Austria (in June, 1953) and the Austrian Decoration for Science and Art (in 1957).

Holzmeister repeatedly worked as a stage designer beginning in the 1930s in collaboration with Max Reinhardt for whom he created the Faust-City for the Salzburg Festival. In the 1950s Holzmeister returned to stage design and again worked for the Salzburg Festival (Don Giovanni) as well as the Vienna State Opera (Fidelio, 1955, for the opening of the renovated State Opera) and the Burgtheater. Holzmeister's stage designs always respected the requirements of stage productions but never concealed the architectonic background of their creator.

He is buried in St. Peter's Cemetery in Salzburg.