Stephens College is a women's college located in Columbia, Missouri. It is the second oldest female educational establishment that is still a women's college in the United States. It was founded on August 24, 1833 as the Columbia Female Academy. In 1856, David H. Hickman turned it into a college, The Columbia Female Baptist Academy. It was later renamed Stephens Female College. The campus includes a National Historic District: Stephens College South Campus Historic District.

Situated in the center of the state, Stephens is approximately 120 miles (193 km) from both Kansas City and St. Louis. Although it is not located near any major cities, Columbia is known as "Collegetown, USA" due to the 34,000 college students attending Stephens, the University of Missouri, and Columbia College, each situated within the city. The Stephens campus occupies 86 acres (35 ha) of land near downtown Columbia.[2]

Cottey College, a junior college in the rural town of Nevada, is the only other women's college in Missouri.

The three most popular majors at Stephens are dance, theatre, and fashion design.[1] 41% of all students major in the visual and performing arts.[2] According to one anonymous student quoted by the Princeton Review in the student's guide to Stephens, "It's all about theater, dance, fashion design, and marketing" at the college. [3]

In keeping with its most popular majors, Stephens is best known for its fine arts programs. Its theatre program is especially well regarded; it was ranked second in the country by U.S. News & World Report in the America's Best Colleges 2006 edition. The Princeton Review also placed it second on their "Best College Theater" list, directly behind Wagner College and ahead of the prestigious programs at schools such as Emerson College (#3), Yale College (#7) and Wesleyan University (#8).[4]

The school has established a unique film program focusing on production.

Aside from the arts programs, Stephens offers more than 40 majors and minors, including majors in traditional subjects such as English, business management, psychology, and biology. The college also has a popular equestrian program and its own stables. Minors are available in fields such as art history, women's studies, and history. The only foreign language concentration available at Stephens is a minor in Spanish.[5]

Upon completion of their undergraduate studies, Stephens students can receive either an Associate's degree or a Bachelor's degree. All Associate degrees offered are in the field of Liberal Arts & Studies. For graduate students, Master's programs in education, strategic leadership and business administration are also available. [6][7]

The Stephens faculty includes approximately 55 full-time instructors. Most have Ph.D.s or appropriate terminal degrees in their field. While faculty members conduct research (often with students), publish papers and present at conferences across the country, a commitment to women's education comes first. Teaching is the first priority for Stephens faculty.

Aside from its theatre program, Stephens has been ranked overall by various other organizations. U.S. News places it in the fourth tier of all liberal arts colleges nationwide, but also considers it to be a "selective" school when it comes to admissions standards.[8]

The Princeton Review 's "Best 361 College Rankings" named Stephens 15th in their "Class Discussions Encouraged" category and 9th in their "Nobody Plays Intramural Sports" category. It was also on their list of "America's Best Value Colleges" and one of 158 colleges named a "Best Midwestern College."[9]

For five consecutive years, Stephens’ Theatre department has ranked among the Top 10 Best College Theater programs in the nation, according to The Princeton Review.

Aside from the sororities, there are about 45 on-campus organizations Stephens students can join. These include affiliates of the College Democrats and College Republicans, religious groups like the Catholic Student Association, Finding Alternative Religions, Stephens Christian Fellowship, as well as (through neighbor MU) Hillel, and a Model United Nations.

The student newspaper, Stephens Life, is released twice each month.[12]

Stephens College also holds the distinction of being the location of the Alpha Chapter of Phi Theta Kappa International Honor Society of the Two-Year College, despite the fact that Stephens College is no longer a two-year institution.

The Citizen Jane Film Festival premiered Oct. 17-19, 2008. Citizen Jane is an annual film festival for the Columbia community and filmmakers from around the country. Films include the best of features, documentaries, animation, and experimental and short films, all showcasing women behind and in front of the camera. "[13]"

The Stephens College Alumnae Association has more than 30,000 members internationally. Alumnae are found in every state, with Alaska, North Dakota, and South Dakota tying for the fewest at 29 each.

In March 2006, Stephens released an interactive alumnae map showing the distribution of living alumnae throughout the United States. The metropolitan areas with the highest numbers of Stephens alumnae include:

Florida also has a particularly high concentration of Stephens alumnae, with 1,237 found statewide, especially in the central, eastern, and southern parts of the state. The Washington, D.C.-to-Boston corridor contains a heavy concentration as well, including 184 alumnae living in Manhattan.[3] 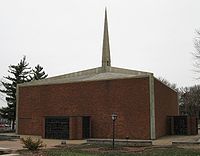 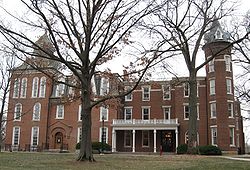 Historic Senior Hall dates back to 1841, when Oliver Parker bought the 8-acre (3.2 ha) tract of land on which the College was first located. In 1857, the Columbia Baptist Female College, which later became Stephens College, acquired the building. Until 1918, Historic Senior Hall was the only dormitory at the College. It was the tradition for the President of the Civic Association (now the Student Government Association) to occupy the first floor room just north of the Waugh Street entrance. Many generations of students feel this building is their tie to the past. A complete restoration of Historic Senior Hall began in the spring of 1987, and the building was rededicated in the spring of 1990. Senior Hall was placed on the National Register of Historic Places in 1977.[4]

Campus traditions at Stephens provide a bond between past and present students. Some traditions have changed to fit changing times, some traditions are very old, and some annual events may be traditions-in-the-making.

Alumnae Reunion At Alumnae Reunion, the President of the Alumnae Association passes a lit candle to a representative of the Senior Class symbolizing the passage from undergraduate years to alumnae responsibilities.

Commencement Since 1976, each senior passes a secret gift to the President when she shakes hands and receives her degree.

Stephens Hymn: “Stephens, our Stephens, hail to thee. We’ll praise thy name through all eternity. Thy ten ideals will live so you can see that Dear, dear old Stephens, we hail to thee.”

"Treasuring memories ever dear, Singing your praise for everyone to hear, Living Ideals for all the world to see that dear, dear old Stephens, we hail to thee!"

Stop Days - Stop Day began on April Fool’s Day in 1913 when a group of students played hooky and went swimming at Rollins Spring. President Wood heard of their deed and joined them with a picnic hamper declaring a day of spring play. Faculty extended the stop day idea by declaring a “reading day” on which no classes meet so that students may prepare for final exams.

The Ten Ideals were developed in the 1930s as a guide for student values. Several residence halls continue to select residents who represent these ideals.

In 1983, while planning for the celebration of the 150th anniversary of the founding of Stephens College, students felt it important to review and update the historic Ten Ideals. To serve as an inspiration for the women of today, the Student Government Association then created and adopted the following Sesquicentennial Ideals.

We seek to transform the world by transforming our values. We hold to these values:

Respect for our own dignity and for the dignity of others, embodied in a sense of social justice

Support for others through the willingness to take and give criticism, acceptance and love

Responsibility for the consequences of our choices

Belief in our changing selves and in our right to change

Creativity in the spiritual and aesthetic dimensions of life

Intelligence that is informed and cultivated, critical yet tolerant

Leadership which empowers others

In 1993, a group of 10 senior students came together to re-establish the concept of the Ten Ideals within the Stephens community. Each ideal is a description of desirable forms of thinking, feeling and acting. The tradition will live on in these women.