Selenium can exist with oxidation state -2, +2, +4, +6. Se(II) is the dominant form in organoselenium chemistry. Down the group 16 column, the bond strength becomes increasingly weaker (234 kJ/mol for the C–Se bond and 272 kJ/mol for the C–S bond) and the bond lengths longer (C–Se 198 pm, C–S 181 pm and C–O 141 pm). Selenium compounds are more nucleophilic than the corresponding sulfur compounds and also more acidic. The pKa values of XH2 are 16 for oxygen, 7 for sulfur and 3.8 for selenium. In contrast to sulfoxides, the corresponding selenoxides are unstable in the presence of β-protons and this property is utilized in many organic reactions of selenium, notably in selenoxide oxidations and in selenoxide eliminations. Organoselenium compounds are found at trace levels in ambient waters, soils and sediments.[5]

Organoselenium compounds are specialized but useful collection of reagents useful in organic synthesis, although they are generally excluded from processes useful to pharmaceuticals owing to regulatory issues. Their usefulness hinges on certain attributes, including (i) the weakness of the C-Se bond and (ii) the easy oxidation of divalent selenium compounds.

Vinylic selenides are organoselenium compounds that play a role in organic synthesis, especially in the development of convenient stereoselective routes to functionalized alkenes.[14] Although various methods are mentioned for the preparation of vinylic selenides, a more useful procedure has centered on the nucleophilic or electrophilic organoselenium addition to terminal or internal alkynes.[15][16][17][18] For example, the nucleophilic addition of selenophenol to alkynes affords, preferentially, the Z-vinylic selenides after longer reaction times at room temperature.The reaction is faster at a high temperature; however, the mixture of Z- and E-vinylic selenides was obtained in an almost 1:1 ratio.[19] On the other hand, the adducts depend on the nature of the substituents at the triple bond. Conversely, vinylic selenides can be prepared by palladium-catalyzed hydroselenation of alkynes to afford the Markownikov adduct in good yields. There are some limitations associated with the methodologies to prepare vinylic selenides illustrated above; the procedures described employ diorganoyl diselenides or selenophenol as starting materials, which are volatile and unstable and have an unpleasant odor. Also, the preparation of these compounds is complex.

Selenium dioxide is useful in organic oxidation. Specifically, SeO2 will convert an allylic methylene group into the corresponding alcohol. A number of other reagents bring about this reaction. . 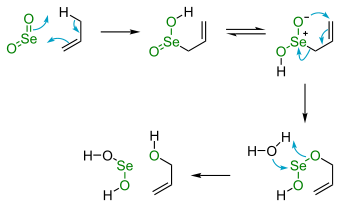 In terms of reaction mechanism, SeO2 and the allylic substrate react via pericyclic process beginning with an ene reaction that activates the C-H bond. The second step is a [2,3] sigmatropic reaction. Oxidations involving selenium dioxide are often carried out with catalytic amounts of the selenium compound and in presence of a sacrificial catalyst or co-oxidant such as hydrogen peroxide.

In presence of a β-proton, a selenide will give an elimination reaction after oxidation, to leave behind an alkene and a selenol. In the elimination reaction, all five participating reaction centers are coplanar and, therefore, the reaction stereochemistry is syn. Oxidizing agents used are hydrogen peroxide, ozone or MCPBA. This reaction type is often used with ketones leading to enones. An example is acetylcyclohexanone elimination with benzeneselenylchloride and sodium hydride [24]

The Grieco elimination is a similar selenoxide elimination using o-nitrophenylselenocyanate and tributylphosphine to cause the elimination of the elements of H2O.