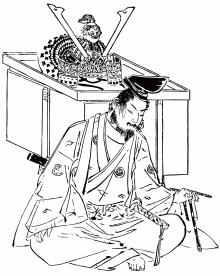 Yoshitsune by Kikuchi Yōsai
In this Japanese name, the family name is "Minamoto".

Minamoto no Yoshitsune (源 義経?, 1159 – June 15, 1189) was a general of the Minamoto clan of Japan in the late Heian and early Kamakura period. Yoshitsune was the ninth son of Minamoto no Yoshitomo, and the third and final son and child that Yoshitomo would father with Tokiwa Gozen. Yoshitsune's older brother Minamoto no Yoritomo (the third son of Yoshitomo) founded the Kamakura shogunate. Yoshitsune's name in childhood was Ushiwakamaru (牛若丸). He is considered one of the greatest and the most popular warriors of his era, and one of the most famous samurai fighters in the history of Japan.[1] 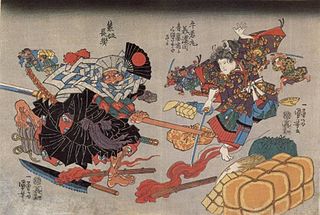 The fight between Ushiwakamaru and the bandit chief Kumasaka Chohan in 1174. Yoshitsune was only 15 when he defeated the notorious bandit leader.

Yoshitsune was born during the Heiji Rebellion of 1159 in which his father and oldest two brothers were killed. His life was spared and he was put under the care of Kurama Temple (鞍馬寺), nestled in the Hiei Mountains near the capital of Kyoto, while Yoritomo was banished to Izu Province. Eventually, Yoshitsune was put under the protection of Fujiwara no Hidehira, head of the powerful regional Northern Fujiwara clan in Hiraizumi, Mutsu Province.

A skillful swordsman, he defeated the legendary warrior monk Benkei in a duel. From then on, Benkei became Yoshitsune's right-hand man, eventually dying with him at the Siege of Koromogawa. 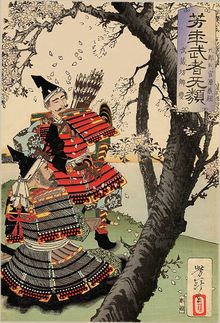 In 1180, Yoshitsune heard that Yoritomo, now head of the Minamoto clan, had raised an army at the request of Prince Mochihito to fight against the Taira clan (also known as the Heike) which had usurped the power of the emperor. Yoshitsune shortly thereafter joined Yoritomo, along with Minamoto no Noriyori, all brothers who had never before met, in the last of three conflicts between the rival Minamoto and Taira samurai clans, known as the Genpei War.

After the Genpei War, Yoshitsune joined the cloistered Emperor Go-Shirakawa against his brother Yoritomo. Fleeing to the temporary protection of Fujiwara no Hidehira in Mutsu again, Yoshitsune was betrayed, defeated at the Battle of Koromo River, and forced to commit seppuku along with his wife and daughter, by Hidehira's son Fujiwara no Yasuhira. Yoshitsune is enshrined in the Shinto shrine Shirahata Jinja in Fujisawa.

Yoshitsune has long been a popular figure in Japanese literature and culture due to his appearance as the main character in the third section of the Japanese literary classic Heike Monogatari (Tale of the Heike). The Japanese term for "sympathy for a tragic hero", Hōgan-biiki (判官贔屓, lit. Hōgan favor?), comes from Yoshitsune's title Hōgan, which he received from the Imperial Court. 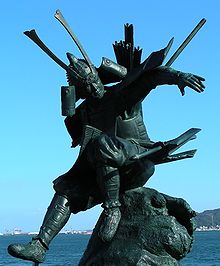 Statue of Yoshitsune at Dannoura

In addition to The Tale of the Heike and Chronicle of Yoshitsune (Gikeiki), which relates events of Yoshitsune's life after the defeat of the Heike, a great many other works of literature and drama feature him, and together form the sekai ("world") of Yoshitsune, a concept akin to the notion of the literary cycle.

In the visual arts, Yoshitsune is commonly depicted as a bishōnen, though this is at odds with contemporary descriptions of his appearance.

Some tales however tell of Minamoto's no Yoshitsune escaping his pursuers and would live on to live more glorious battle under a new name Genghis Khan.