Metal Slug 2 (メタルスラッグ 2?) is a run and gun video game for the Neo-Geo console/arcade platform created by SNK. It was released in 1998 for the MVS arcade platform and is the sequel to the popular Metal Slug. It is the second title in the Metal Slug series. The game was later re-released in a slightly modified/remixed form as Metal Slug X. It was re-released for the Wii's Virtual Console in North America on December 1, 2008 at a cost of 900 Wii Points.[1]

General Morden, the antagonist from the first game is back once more with his army, bent on taking over the world. It is up to the Peregrine Falcon squad, who are now joined by two new characters: Eri Kasamoto and Fiolina Germi of the Sparrows Intelligence Unit, to save the day.

As the levels unfold, it turns out that Morden has allied with Martians to help facilitate his plans. In the final level of the game, the tables are turned when Morden comes under attack and is betrayed by his Martian allies and taken prisoner by them. An ad-hoc alliance is formed between the Peregrine Falcon squad and General Morden's army to combat the greater alien threat. After a long battle, they succeed in defeating the Martians' Mothership, driving them off the Earth. Morden seems to have fallen from the ship, strapped to a solid iron plate, only wearing his eyepatch, beret, and pink boxer shorts. While his soldiers celebrate, the plate loses its balance and crushes him. 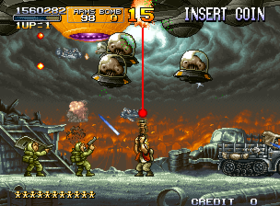 One of the new weapons introduced, the Laser, being used on the Mars People.

Metal Slug 2 added new weapons to the player's arsenal. A single shot from the Laser is capable of killing a column of infantry, and sustained fire quickly destroys vehicles. Fire Bombs found in the second level help to clear away mummies. Armor Piercing Shells give the Metal Slug cannon shells that only fire straight when engaging enemy vehicles.

The game also included more fighting vehicles. Though just as susceptible to enemy fire as the Metal Slug, these vehicles provided alternate modes of transportation, and advantages associated with each.

Metal Slug 2 introduced the ability into the franchise for characters to transform into different variants during the course of the game. The first transformation is one into a mummy during the second mission of the game. Any hit from the purple tinged attacks of the mummy-variants or potions dropped by bats will trigger the transformation. This causes a drastic reduction in player movement speed and loss of any special weapon. Mummified characters hold only a pistol, which they fire at a rate of half as fast as normal, and they take time to toss a grenade. Players can not use the knife when transformed, making this transformation the only one in the series that has no redeeming features. Another hit by purple mist will cause the player, transformed as the mummy, to burn in a purple flame and die. There are antidotes hidden throughout the level and dropped by enemies and prisoners that can restore the player to human form.

Also introduced in this game was the ability to become obese. This transformation is gained, logically, by the acquirement of many food items during a single game-life. Once enough food is obtained the announcer yells "Uh-oh, big!," and the character is radically transformed. Movement speed is slowed, but every weapon's attack is altered: melee attacks are changed from a knife to a fork (belt whip if sitting), grenades are changed to larger cherry-style bombs, and the current weapon is replaced with a version that has larger bullets and may have its properties altered. The Rocket Launcher used in obese mode has an immensely improved tracking ability, for example. If a diet-powder canister is found, enough time passes without picking up any food items, or the player is killed, the player(s) will revert to their former regular selves.

Metal Slug 2 is the first game in the series to provide characters to help the players in battle. The first is Hyakutaro Ichimonji, a prisoner who, when rescued, will fight alongside the player who saved him, throwing Hadouken balls at enemies, or roundhouse kicking them if they manage to get within melee range. Also appearing is Sergeant Rumi Aikawa, a Regular Army supplier who lacks a sense of direction, earning her the title "The Wandering Ghost"; she carries a huge, overstuffed backpack and drops items (more are dropped if the backpack is shot or cut). 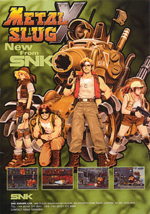 A sales flyer for Metal Slug X, an update of this game.

A revised version of Metal Slug 2, titled Metal Slug X, was released on March 1999 for the Neo Geo MVS. It fixed problems with slowdown present in Metal Slug 2, and increased the difficulty. Metal Slug X also introduced a few new elements to the Metal Slug 2 game system. New weapons and items were added, such as the "Iron Lizard" and the "Drop Shot". The enemy placement and bosses were re-arranged as well.