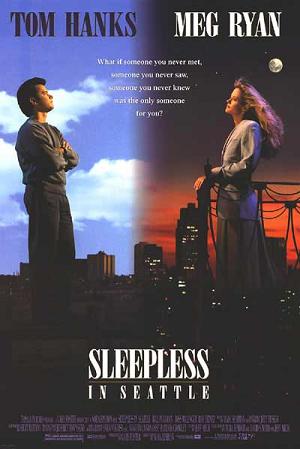 "Sleepless in Seattle" is a 1993 American comedy-drama written and directed by . Based on a story by , it stars as Sam Baldwin and as Annie Reed.

The film was inspired by "" and used both its theme song and clips from the film in critical scenes. The climactic meeting at the top of the Empire State Building is a reference to a reunion between and in "An Affair to Remember" that fails to happen because the Kerr character is struck by a car while enroute. At one point, some of the characters discuss "Affair", with Sam commenting that it sounds like a "chick movie." The success of "Sleepless in Seattle" led to a resurgence in popularity for "An Affair to Remember" for a younger generation of filmgoers.Fact|date=February 2007

Sam Baldwin, a , has lost his wife to . He and his young son Jonah move to , to make a fresh start, but Sam is still disconsolate. On evening, Jonah calls into a national radio advice show and persuades his father to go on the air with him to talk about how much he misses his wife. Thousands of women around the country, touched by Sam's story, send him letters. One letter is from Annie Reed, a journalist from Baltimore, , engaged to a nice but sneeze-prone man named Walter () who feels that there is something missing. Jonah, who has been working his way through the flood of mail, finds Annie's missive and likes that it mentions the . He tries to convince his father to go to New York City to meet her on Valentine's Day, but Sam loses his temper and refuses. Jonah flies to New York and takes a taxi to the , saying he's going to meet his new mother. Sam, in pursuit, catches up with Jonah, who hasn't found Annie because she's busy breaking up with her fiancé. Jonah and Sam get on the down elevator just before a late Annie rushes in, but with the help of a lost backpack and teddy bear, all ends well.

"Sleepless in Seattle" was nominated for two : Best Music, Original Song for "A Wink and a Smile", music by , lyrics by ; and Best Writing, Screenplay Written Directly for the Screen for Nora Ephron, , and Jeff Arch.

* was the first choice for the role of "Annie Reed", but she turned down the role because she thought the script wasn't written well enough. She later stated that she regrets turning the part down, and she admitted that her judgment on picking successful films is often poor. [ [http://www.contactmusic.com/new/xmlfeed.nsf/mndwebpages/kim%20basinger.s%20big%20regret 8 MILE - KIM BASINGER'S BIG REGRET ] ]
* and share approximately two minutes of screentime together.