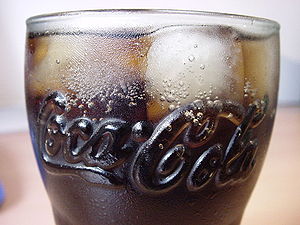 A glass of Coca-Cola

The Coca-Cola formula is The Coca-Cola Company's secret recipe for Coca-Cola. As a publicity, marketing, and intellectual property protection strategy started by Robert W. Woodruff, the company presents the formula as a closely held trade secret known only to a few employees, mostly executives.

To this day, Coca-Cola uses a United States license to purify the coca leaf for medicinal use.[3]

Because cocaine is naturally present in coca leaves, today's Coca-Cola uses "spent," or treated, coca leaves, those that have been through a cocaine extraction process, to flavor the beverage. The coca leaves are imported from countries like Peru and Bolivia, and they are treated by chemical company Stepan, which then sells the de-cocainized residue to Coca-Cola.[4] Some contend that this process cannot extract all of the cocaine alkaloids at a molecular level, and so the drink still contains trace amounts of the stimulant.[1][5] The Coca-Cola Company currently refuses to comment on the continued presence of coca leaf in Coca-Cola.[6][7]

A court case in Antalya, Turkey, mentioned cochineal dye in Coca-Cola, but the company denies it currently uses the dye.[8][9]

In the United States, Coca-Cola normally uses high-fructose corn syrup instead of sugar as its main sweetener, due to the combined effect of corn subsidies and sugar import tariffs making HFCS substantially cheaper. There are two main sources of sugar-based Coca-Cola in the United States:

While the usual Coca-Cola formula is kosher (the original glycerin from beef tallow having been replaced by vegetable glycerin), during Passover Ashkenazi Jews do not consume Kitniyot, which prevents them from consuming high fructose corn syrup (HFCS).[10]

Even sugar-based formulae would still require certification of both the formula and the specific bottling plant, as the strictures of Kashrut on Passover are far higher and more complicated than usual kosher observance.

In the United States, there is strong demand from Latin-American immigrant customers for the Coke they drank "back home", so Mexican sugar-based Coca-Cola in traditional contour bottles is sold in ethnic markets. In recent times, a cult following has emerged amongst younger Coke drinkers who believe this to be the pre-New Coke original formula. The company advises people seeking a sugar-based Coca-Cola to buy "Mexican Coke".[11]

On January 23, 2011, during an NFL commercial, Coca-Cola teased that they would share the secret formula only to flash a comical "formula" for a few frames. This required the use of DVR to freeze on the formula for any analysis, which ultimately proved to be a marketing ploy with no intention of sharing the full official formula. Ingredients listed in the commercial: Nutmeg Oil, Lime Juice, Cocoa, Vanilla, Caffeine, "flavoring", and a smile.

This recipe is attributed to a diary owned by Coca-Cola inventor, John S. Pemberton, just before his death in 1888. (U.S. measures).[12]

This recipe does not specify when or how the ingredients are mixed, or the flavoring oil quantity units of measure (though it implies that the "Merchandise 7X" was mixed first). This was common in recipes at the time, as it was assumed that preparers knew the method.

This recipe is attributed to pharmacist John Reed.[13][14]

On February 11, 2011, Ira Glass revealed on his PRI radio show, This American Life, that the secret formula to Coca-Cola had been uncovered in "Everett Beal's Recipe Book," reproduced in the February 28, 1979, issue of the The Atlanta Journal-Constitution. The formula found basically matched the formula found in Pemberton's diary.[16][17][18] The recipe revealed contains:[19]