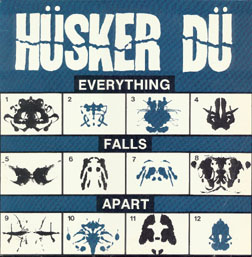 "Everything Falls Apart" is 's first , as their full-length debut, "Land Speed Record", was recorded live. Earliest pressings, which included a lyric sheet, are of greatest interest to collectors, but later pressings without the lyric sheet are also worth seeking. POV-statement|date=December 2007 There were only two pressings of this album with 5,000 copies for each pressing. There is an unverified rumor that the master tape for this recording has been lost [http://www.thirdav.com/hd_discog/01_commercial.html#efa] , although it should be pointed out that the loss of the master tape would have made the later Rhino CD reissue impossible. (Coincidentally, the original 2-track stereo master for the Husker Du EP "" was later lost, forcing the band partnership to remix the songs from the original multi-track tapes in order to add them to the CD reissue of "Everything Falls Apart" as bonus tracks.)

The album was released on in 1993 as "Everything Falls Apart and More", with bonus tracks including the band's first 2 singles, the full version of "Statues" lasting over 8 minutes, and an unreleased track recorded in a St. Paul, Minnesota basement called "Do You Remember?" (which is what "hüsker dü" translates from in Danish and Norwegian). The reissue also includes extensive liner notes by Terry Katzman (cofounder of and soundman for the band from 1980 to 1983) as well as lyrics to a few of the songs.