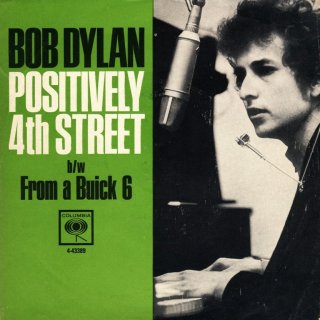 "Positively 4th Street" is a song written and performed by , first recorded by Dylan in on , . Released as single 43389 during September of the same year, it reached #7 on the U.S. charts and #8 on the U.K. charts. The magazine "" ranked the song as number 203 in their 500 Greatest Songs of All Time [cite web|title=Rolling Stone's 500 Greatest Songs of All Time|url=http://www.rollingstone.com/news/coverstory/500songs/page/3|accessdate=2008-08-08]

"Positively 4th Street" was recorded , during the same sessions that produced most of the material that appeared on Dylan's 1965 album, "". The song was the last to be attempted that day, with Dylan and a variety of session musicians having successfully recorded master takes of "It Takes a Lot to Laugh, It Takes a Train to Cry" and "Tombstone Blues" earlier. The band for "Positively 4th Street" featured Robert Gregg (drums), Russ Savakus (bass), Frank Owens (piano), (organ) and (guitar), with the song appearing as "Black Dalli Rue" on the studio's official recording sheets.

Though recorded at the "Highway 61" sessions, the song was saved for single-only release, eventually charting in the top ten on both sides of the Atlantic. Critic praised it as "an icy bitch session" with "Dylan cutting loose his barbed-wire tongue at somebody luckless enough to have crossed the path of his desires." The song later appeared on the compilations "", "Biograph", and "".

The lyrics of "Positively 4th Street" are bitter and derisive, which caused many at the time of the song's release to draw comparison with Dylan's similarly toned previous single "" (indeed, journalist Andy Gill described it as "simply the second wind of a one-sided argument, so closely did it follow its predecessor's formula, both musically and attitudinally").

There is uncertainty about exactly which "4th Street" the title refers to, with many scholars and fans speculating it refers to more than one Fact|date=October 2007. New York City's 4th Street is at the heart of the residential district , where Dylan once lived. This area was central to the burgeoning scene of the early 1960s around Dylan and many other influential singer-songwriters. However, the song also may concern Dylan's stay at the in Minneapolis, where 4th Street S.E. is one of the two main roads crossing through the part of campus known as , where Dylan lived and performed.

The song is generally assumed to ridicule residents who criticized Dylan for his departure from traditional folk styles towards the electric guitar and rock music. Many of them who had been good friends took offence, and assumed that the song carried personal references. Noted Village figure , who ran the Folklore Center, had this to say of the accusation:

"At least five hundred came into my place [the Folklore Center] ... and asked if it was about me. I don't know if it was, but it was unfair. I'm in the Village twenty-five years now. I was one of the representatives of the Village, there is such a thing as the Village. was still in the Village. Dylan comes in and takes from us, uses my resources, then he leaves and he gets bitter. He writes a bitter song. He was the one who left."

Other possible targets of the song's derision are: , editor of "" magazine and a critic of Dylan's move away from traditional folk styles; , who had criticized the emerging scene at the time by basically describing the scene as putting style over substance, and he criticized the general popular shift to in a "" magazine article from autumn of 1965 entitled "Folk Rot" (though Dylan wrote and recorded "Positively 4th Street" months before the "Folk Rot" article even came out in "" magazine); was also claimed to be a possible target in Michael Schumacher's book "There For Fortune: The Life Of Phil Ochs", after Dylan got angry at Ochs for his criticism of the song "", which supposedly prompted Dylan to throw Ochs out of his limousine (though Dylan wrote and recorded "Positively 4th Street" months before this incident occurred in September of 1965); Dylan's ex-girlfriend ; and (as reported by a counterculture insider in the 1960s, but like the other speculations, unverified). In the book "Dylan - Visions, Portraits, and Back Pages", compiled by the writers of the UK's magazine, there is some speculation that this song, as well as a general trend in much of Dylan's writing of the time, is due to his experiences with . His feelings on this were that "LSD is not for groovy people: it's for mad, hateful people who want revenge", which then corresponds with a derisive, attacking tone in the songs on and , and indeed in the harsh and powerful mess of Dylan's electric sound. Others have viewed "Positively 4th Street" and "" to have been directed at and her association with , though this seems very unlikely as Dylan recorded this song before his involvement with Sedgwick had turned sour.

took the title of the song for his book, "".

The song, like most of Dylan's, is composed of a simple chordal and melodic structure; the verse has a I-ii-IV progression followed by a I-V-IV-Vi-V. While the lyrics are distinctly negative, the organ-dominated backing music is major and almost care-free. This contrast heightens the ridicule and mockery of the lyrics.

Johnny Rivers was probably the first to cover this song, using this as his album closing track on "Realization" in 1968.

The song was also covered by in the sessions. During the creatively bleak spots in the Let It Be sessions would often contribute a Dylan cover to lighten the mood.

covered this song in 1970 on their album.

contributed a cover of the song for the live compilation album "In Their Own Words, Vol. 1" in 1994.

released a version of the song (with slightly altered lyrics) on the 2003 album "".

covered this song on his 2007 album, "Dylanesque".

The covered this song during live performances.