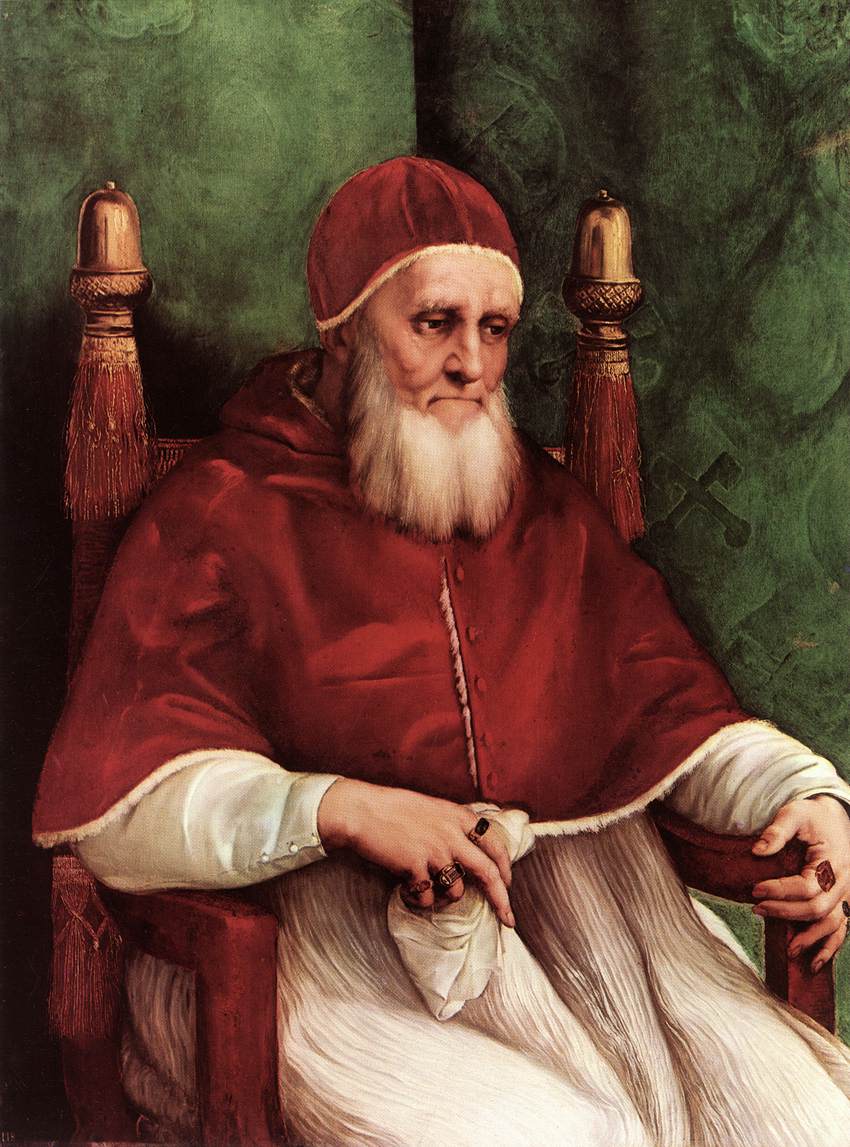 The "Portrait of Pope Julius II" is a painting attributed to the Italian painter . Three portraits that have been attributed to Raphael of as an old man exist: in the , in the Uffizi Gallery, and in the , also Florence. A thorough investigation of the London painting by and others has proved it to be the original. [For a dissident opinion by , see [http://links.jstor.org/sici?sici=0391-9064%281996%2917%3A33%3C69%3ATPOJII%3E2.0.CO%3B2-3&size=LARGE&origin=JSTOR-enlargePage JSTOR] "The Portrait of Julius II in London's National Gallery. The Goose That Turned into a Gander", James Beck, Artibus et Historiae, Vol. 17, No. 33 (1996), pp. 69-95] The version in the Uffizi is now said to be from Raphael's workshop, while that in the Palazzo Pitti has been attributed to by some experts. There is a possible cartoon for the London version in the Palazzo Corsini, Florence, [Gould] and a red chalk drawing at [Jones & Penny:157-8]

Pope Julius II gave this painting to the church of , where after his death it was displayed on important feast days. In 1591 it was "purloined" from the church by Cardinal , the Pope's nephew. He put his collection on the market a few years later, and it was nearly all sold to Cardinal . This painting was in the in 1693, as a small inventory mark at bottom left shows. It presumably left the collection in the 1790s, and was in the by 1823, and was acquired by the National Gallery in 1824, [Gould] so that it can be traced with confidence back to the ownership of the sitter, unlike the other existing versions.

The who had commissioned the pictorial cycles and other works that had so contributed to the artist's fame, is depicted in a portrait "so animated and true to life that it was frightening to behold, as though it were actually alive" (Vasari).

The painting shows the Pope seated with the on his head, dressed in a white surplice and a crimson mantle (). Here the simple but effective tonal contrast, first used in the "Portrait of a Cardinal", reappears. The Pope, though old, still seems very vigorous and the energy is clearly visible in the hand that grasps the right arm of the chair with strength and pride. The two acorn-shaped knobs on the back of the chair recall the Pope's coat of arms. Previous Papal portraits showed them frontally, or kneeling in profile. It was also "exceptional" at this period to show the sitter so evidently in a particular mood - here lost in thought. [Jones & Penny:158] The intimacy of this image was unprecedented in Papal portraiture, but became the model,"what became virtually a formula", followed by most future painters, including and Velázquez. [Gould] The pattern of papal keys and tiaras just visible in the green curtain was originally painted gold to simulate embroidery, and the artist's change of mind here, and in other ,disclosed when the painting was scientifically assessed in 1969 prior to cleaning, is one of the main reasons for its acceptance as the original of several versions of the portrait. [Gould]

The picture can be dated by Julius's beard, which he grew as a token of mortification at having lost the city of in 1511 and had shaved off by March 1512. He was to die at 70 the following year. A choleric and active man, much criticised during his turbulent pontificate for personally leading his troops in strenuous military campaigns, he is represented as at once forceful - as in the left hand - aristocratic the right hand - and meditative. The portrait is in every way worthy of a patron unique in the history of art, a pope discerning and fortunate enough to have been served by three of the greatest artists of the - the architect , and Raphael.