Sir Christopher Kelk Ingold FRS[1] (28 October 1893 – 8 December 1970) was a British chemist based in Leeds and London. His groundbreaking work in the 1920s and 1930s on reaction mechanisms and the electronic structure of organic compounds was responsible for the introduction into mainstream chemistry of concepts such as nucleophile, electrophile, inductive and resonance effects, and such descriptors as SN1, SN2, E1, and E2. He also was a co-author of the Cahn–Ingold–Prelog priority rules. Ingold is regarded as one of chief pioneers of physical organic chemistry.[2] 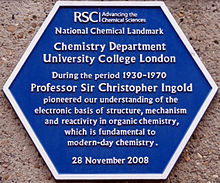 Ingold began his scientific studies at Hartley University College at Southampton (now Southampton University) taking an external BSc in 1913 with the University of London. After a brief time with Imperial College, London and some war service, as a scientist, Ingold earned an MSc degree, again with the University of London. He returned to Imperial College for work with Jocelyn Field Thorpe[3], and was awarded a PhD in 1918 and a DSc in 1921.

Ingold married Dr. Hilda Usherwood, a fellow chemist with whom he collaborated, in 1923. They had two daughters and a son, the chemist Keith Ingold.[4]

In 1924, Ingold moved to Leeds University where he spent six years as Professor of Organic Chemistry. He returned to London in 1930, and served for 24 years as Head of the chemistry department at University College London, from 1937 until his retirement in 1961.

Starting around 1926, Ingold and Robert Robinson carried out a heated debate on the electronic theoretical approaches to organic reaction mechanisms. See, for example, the summary by Saltzman.[5]