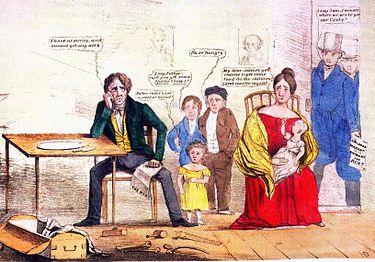 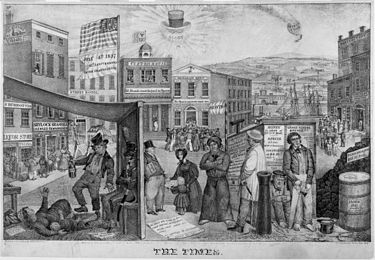 The Panic of 1837 was a financial crisis or market correction in the United States built on a speculative fever.[1] The end of the Second Bank of the United States had produced a period of runaway inflation, but on May 10, 1837 in New York City, every bank began to accept payment only in specie (gold and silver coinage), forcing a dramatic, deflationary backlash. This was based on the assumption by former president, Andrew Jackson, that the government was selling land for state bank notes of questionable value. The Panic was followed by a five-year depression, with the failure of banks and then-record-high unemployment levels.

Some causes include the economic policies of President Andrew Jackson who created the Specie Circular by executive order and also refused to renew the charter of Second Bank of the United States, resulting in the withdrawal of government funds from that bank. Martin Van Buren, who became president in March 1837, five weeks before the Panic engulfed the young republic's economy, was blamed for the Panic. His refusal to involve the government in the economy was said by some to have contributed to the damages and duration of the Panic. Jacksonian Democrats blamed the banks' irresponsibility, both in funding rampant speculation and in introducing paper money inflation. This was caused by banks' issuing excessive paper money (unbacked by bullion reserves), leading to inflation.

Others take a different view, blaming a combination of the Second Bank of the United States, Mexican bimetallism (which drove Mexican silver out of Mexican circulation according to Gresham's Law, and into America where it was legal tender), legal tender law, fractional reserve banking, and state government deficit spending, which dramatically increased the money and credit supply, decreased interest rates, and led to erroneous investment decisions before and up to 1837, according to the Austrian Theory of the Business Cycle.[2]

Within two months the losses from bank failures in New York alone aggregated nearly $100 million. "Out of 850 banks in the United States, 343 closed entirely, 62 failed partially, and the system of State banks received a shock from which it never fully recovered.".[3] The publishing industry was particularly hurt by the ensuing depression.[4]

In 1842, the American economy was able to rebound somewhat and overcome the five year depression, in part due to the Tariff of 1842,[3] but according to most accounts, the economy did not recover until 1843.[5][6]

Most economists also agree that there was a brief recovery from 1838 to 1839, which then ended as the Bank of England and Dutch creditors raised interest rates.[7] However, economic historian Peter Temin has argued that, when corrected for deflation, the economy actually grew after 1838.[8] According to economist and historian Murray Rothbard, between 1839 and 1843, real consumption increased by 21 percent and real gross national product increased by 16 percent, despite the fact that real investment fell by 23 percent and the money supply shrank by 34 percent.[9]