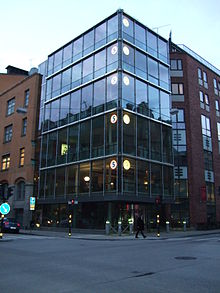 Swedish headquarters for Kanal 5 in Stockholm.

Kanal 5 (English: Channel 5) is a Swedish commercial television channel established in 1989. It is owned by the media corporation ProSiebenSat.1 Media.

After a troublesome 1990s, Kanal 5 launched new strategies in the early 2000s that established it as a popular entertainment channel targeting young people. The channel's slogan is "Roligare TV" ("More Entertaining TV") and it only broadcasts entertainment, such as series, movies, reality series and infotainment documentaries. In 2006, the channel was the most popular channel among Swedes aged 15-24.[2]

On 8 March 1989, business man Matts Carlgren announced that he intended to start a new commercial television channel, as Jan Stenbeck had done with TV3. The channel was called Nordic Channel and launched on 27 March 1989.

The channel made heavy losses during its first years. In 1991, it was sold to Scandinavian Broadcasting System, headed by Harry E. Sloan, who had already bought Kanal 2 in Copenhagen and TV Norge in Norway. He renamed the channel TV5, but the French language TV5 complained and the channel had to be called TV5 Nordic. This was still in the early years of cable television and French TV5 still had widespread distribution in Swedish cable networks. TV5 Nordic finally had to drop its name in 1994, and became known as Femman ("The Five"). On 4 February 1996, the channel was named Kanal 5.

The Swedish version of Big Brother was launched in 2000 and ran for six seasons. Kanal 5 also had the rights for the American sitcom Friends. The last episode was broadcast on 15 December 2004, and attracted 965,000 viewers, one of the highest rated programmes in the channel's history.[3]