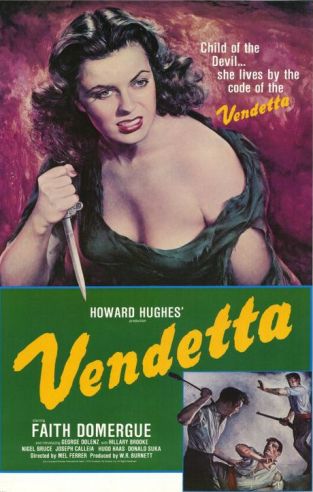 "Vendetta" is a 1950 film based on the 1840 "Colomba" by , about a young Corsican girl who pushes her brother to kill to avenge their father's murder.

The film, produced by as a vehicle for his latest discovery, (pronounced "Dah-mure"), began principal photography for in 1946, but was not released until four years later through , which Hughes had recently purchased. Hughes fired director as well as his producing partner, , who replaced Ophuls. completed the film, but Hughes decided he wanted more changes and brought in actor/director , who is the only credited director on the film. Hughes himself did some direction of pick-up scenes. The screenplay was credited to , but the script was worked on by a number of writers, including Sturges, who originated the project at Hughes' behest.

"Vendetta" is estimated to have cost around $4 million, an extraordinary amount for the time. The film was neither a critical nor a box office success.

In 1825, in the village of Pietranera in French-controlled Corisca, hot-blooded maiden Colomba della Rabia () wants her brother Orso () to avenge the murder of their father by the powerful Barracini family. Despite being a lieutenant, Orso is a man of peace and reason who opposes the Corsican practice of "vendetta" and revenge; he is more interested in courting the beautiful English aristocrat, Lydia Nevil (), who is vacationing on the island with her father, Col. Sir Thomas Nevil ().

To persuade Orso to do his family duty, Colomba must have the help of a family friend, the "bandit" Padrino (Donald Buka), and his servant Brando (). When Orso is finally convinced that the Barracinis are guilty, and were acquitted at trial due to perjured testimony, he challenges Vincente Barracini to a duel, which pleases Colomba but horrifies Lydia. She is now bethrothed to Orso, but threatens to leave him if he goes through with the duel.

When Orso heads to the appointed place, Colomba finds out that the Barracini brothers are going to ambush him, and rides out to give him warning. In the confrontation that comes, Colomba is shot and dies in Orso's arms, the Barracinis are killed, and Orso is wounded, but not seriously. Padrino tells the grief-striken Orso that he must use his experience to guide the people to a better way of living, breaking the cycle of "vendetta" and death. [TCM [http://www.tcm.com/tcmdb/title.jsp?stid=94709&category=Full%20Synopsis Full synopsis] ]

Cast notes:
*George Dolenz was the father of singer of .
*One source lists as "Aria singer". The aria is from the opera "" by . [TCM [http://www.tcm.com/tcmdb/title.jsp?stid=94709&category=Music Music] ]

The saga of the making of "Vendetta", which had the working titles of "Colomba" and "The Shooting of Our Lady of the Doves", is extensive. In fy|1944, after ten years, writer/director left , where he made his most popular and successful films, including the runaway hit "" (fy|1941), and joined in a partnership with eccentric millionaire aviator to create California Pictures. By September fy|1945, work has already begun on the new company's first picture, "", written and directed by Sturges, and it was announced that Sturges had completed the first draft of an adaptation of Prosper Mérimée's 1840 novella "Colomba", the first time it had been used as the basis for a sound film. (It was adapted in 1920 in France as a .) Sturges began the project at the request of Hughes, who was looking for a vehicle for his protegé, .

By July of fy|1946, French director had been announced as the director, in what would be his American debut. Ophüls had been trying for four years to get a directing job in , and Sturges hired him so that he could concentrate on completing "..Harold Diddlebock". Ophüls' first choices to play opposite Domergue were and , but Hughes refused to pay star salaries, and worried that Domergue, who had little acting experience, would be outshined by powerful and better-known actors. The cast that was eventually assembled had Domergue, , , Gregory Marshall, George Renevant and . Principle photography began in mid-August of 1946.

After only a week of shooting, Hughes, who was recuperating from the crash of an experimental reconnaissance plane, complained to Sturges about the slowness of Ophüls' shooting pace and the way he handled Domergue. Saying that he didn't want an "foreigners" working for California Pictures, he demanded that Sturges fire the French director, who in fy|1949 made the film "" about his experience with Hughes. Sturges took over the helm of the film, and principle photography wrapped on , with the film both over its shooting schedule and its budget.

At this point, Sturges quit the film or was fired, and his partnership with Hughes was dissolved, with both of the company's films, "Vendetta" and "The Sin of Harold Diddlebock", seriously overbudget. Hughes bought director out of his contract with to be the new director for "Vendetta", re-cast the film, and replaced the production staff. He cut out one of the major characters, the son of the aristocratic English lady, because he was dissatisfied with actor Gregory Marshall's performance, and he wanted Domergue to get more screen exposure.

Principle photography began again on with Heisler directing, and with and Donald Buka as the new co-stars, but paused again for about 10 days near the end of the month for the script to be re-written. Filming started up again, with some new cast members, on and proceeded until fy|1947. During this time, writers and Peter O'Crotty were engaged, in January, to do more re-writes, and director Heisler became ill for several days so that editor Paul Weatherwax had to substitute for him. By this time, the film had been shooting for 88 days.

Hughes was dissatisfied with the result of Heisler's work and wanted a new ending for the film. He and Heisler couldn't agree, and Heisler departed in May of fy|1947. Hughes then brought in actor/director , who he borrowed from 's production company in June, to finish the film, with the expectation that his assignment would last about 30 days and cost about $200,000. Hughes also hired Wells Root to do re-writes, and replaced the director of photography.

Ferrer began shooting on 1947. Because Hughes kept expanding what was to be re-shot, this phase of the production ended up taking almost seven weeks and costing over $1 million. Shooting wrapped in late November, but by March of fy|1948, Hughes wanted more changes, and Ferrer came back to do re-shoots beginning on , with Hughes himself directing some pick-up scenes.

During the course of the film's extensive shooting, much of which was done at Samuel Goldwyn Studios

"Vendetta" was finally released in fy|1950, premiering in on , [IMDB [http://www.imdb.com/title/tt0043100/releaseinfo Release dates] ] over four years from when filming had begun. The film had been made at the estimated expenditure of over $4 million, [IMDB [http://www.imdb.com/title/tt0043100/business Business data] ] , an extraordinary amount for the time for a film that had no big stars and was not epic in scale. had originally been contracted to distribute the film, but after Hughes bought in the middle of fy|1948, he paid UA $600,000 for the rights to "Vendetta", "The Sin of Harold Diddlebock" and "", and announced he would distribute them through RKO. The film was marketed with the taglines "She lives by the code of the vendetta!" and "Love is wild - life is violent - death is cheap!" [IMDB [http://www.imdb.com/title/tt0043100/taglines Taglines] ]

In the course of production on "Vendetta", there had been no significant problems with the censors at the , although had complained in August 1949 about the overtones of "unholy love" (i.e. incest) in the film, referring to the relationship between "Colomba" and "Orso", and after the film was released, conservative publisher Martin Quigley made the same complaint. The censors also objected to the ad campaign for the film, which, like the campaign for Hughes' "The Outlaw", featured Domergue's exposed cleavage. Despite these concerns, no states banned or cut the film.

It is not known what percentage of the final released film can be ascribed to the various directors who worked on it. News reports at the time claimed that little of what Ophüls or Sturges shot was retained in the film, perhaps no more than a couple of minutes. Heisler's footage may make up as much as two-thirds of the film, although probably less than that. Although it was reported that Hughes had agreed to give Heisler a screen credit, only Mel Ferrer is credited on the released film.

Preston Sturges later wrote that "Vendetta" was the best adaptation he had ever done, but how much of his script was used in the final film is not known &ndash; little enough that his autobiography lists his script for the film as being "unproduced".

"Vendetta" was a major critical and box office flop.