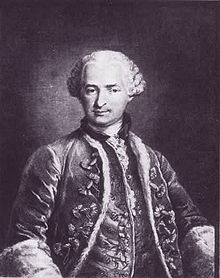 An engraving of the Count of St Germain by Nicolas Thomas made in 1783, after a painting then owned by the Marquise d'Urfe and now apparently lost.[1] Contained at the Louvre in France [2]

The Count of St. Germain (born 1712?;[3] died 27 February 1784[4]) has been variously described as a courtier, adventurer, charlatan, inventor, alchemist, pianist, violinist and an amateur composer. He achieved great prominence in European high society of the mid-1700s, and since then various scholars have linked him to mysticism, occultism, secret societies, and various conspiracy theories. Contemporaries referred to him (often ironically) as 'the Wonderman'.[5] Colin Wilson describes him as a charlatan, yet nevertheless possessed of genius.[6] His name has occasionally caused him to be confused with Claude Louis, Comte de Saint-Germain, a noted French general, and Robert-Francois Quesnay de Saint Germain, an active occultist.[7]

The scarcity of contemporary biographical detail about St. Germain (alongside his own apparent self-mythologising) has supported the construction of many versions of his origins and ancestry, but the most commonly attributed background are that he was:

An aristocratic background would explain why the Count was always seemingly flush with cash, his evident training as a gentleman and his extraordinary learning.

He apparently began to be known under the title of the Count of St Germain during the early 1740s.[10]

According to David Hunter, the Count contributed some of the songs to L'incostanza delusa, an opera performed at the Haymarket Theatre in London on all but one of the Saturdays from the 9th of February to the 20th of April 1745.[7] Later, in a letter of December of that same year, Horace Walpole mentions the Count St. Germain as being arrested in London on suspicion of espionage (this was during the Jacobite rebellion) but released without charge:

The other day they seized an odd man, who goes by the name of Count St. Germain. He has been here these two years, and will not tell who he is, or whence, but professes [two wonderful things, the first] that he does not go by his right name; [and the second that he never had any dealings with any woman - nay, nor with any succedaneum (this was censored by Walpole's editors until 1954)] He sings, plays on the violin wonderfully, composes, is mad, and not very sensible. He is called an Italian, a Spaniard, a Pole; a somebody that married a great fortune in Mexico, and ran away with her jewels to Constantinople; a priest, a fiddler, a vast nobleman. The Prince of Wales has had unsatiated curiosity about him, but in vain. However, nothing has been made out against him; he is released; and, what convinces me that he is not a gentleman, stays here, and talks of his being taken up for a spy.[11]

The Count gave two private musical performances in London in April and May of 1749.[7] On one such occasion, Lady Jemima Yorke described how she was 'very much entertain'd by him or at him the whole Time- I mean the Oddness of his Manner which it is impossible not to laugh at, otherwise you know he is very sensible & well-bred in conversation'.[7] She continued:

'He is an Odd Creature, and the more I see him the more curious I am to know something about him. He is everything with everybody: he talks Ingeniously with Mr Wray, Philosophy with Lord Willoughby,and is gallant with Miss Yorke, Miss Carpenter, and all the Young Ladies. But the Character and Philosopher is what he seems to pretend to, and to be a good deal conceited of: the Others are put on to comply with Les Manieres du Monde, but that you are to suppose his real characteristic; and I can't but fancy he is a great Pretender in All kinds of Science, as well as that he really has acquired an uncommon Share in some'.[7]

'spoke Italian and French with the greatest facility, though it was evident that neither was his language; he understood Polish, and soon learnt to understand English and talk it a little [...] But Spanish or Portuguese seemed his natural language'.[12]

Walpole concludes that the Count was 'a man of Quality who had been in or designed for the Church. He was too great a musician not to have been famous if he had not been a gentleman'.[13] Walpole describes the Count as pale, with 'extremely black' hair and a beard. 'He dressed magnificently, [and] had several jewels' and was clearly receiving 'large remittances, but made no other figure'.[14]

A mime and English comedian known as Milord Gower impersonated St-Germain in Paris salons. His stories were wilder than the real Count's — he had advised Jesus, for example. Inevitably, hearsay of his routine got confused with the original.

Giacomo Casanova describes in his memoirs several meetings with the "celebrated and learned impostor". Of his first meeting, in Paris in 1757, he writes:

The most enjoyable dinner I had was with Madame de Robert Gergi, who came with the famous adventurer, known by the name of the Count de St. Germain. This individual, instead of eating, talked from the beginning of the meal to the end, and I followed his example in one respect as I did not eat, but listened to him with the greatest attention. It may safely be said that as a conversationalist he was unequalled.

St. Germain gave himself out for a marvel and always aimed at exciting amazement, which he often succeeded in doing. He was scholar, linguist, musician, and chemist, good-looking, and a perfect ladies' man. For awhile he gave them paints and cosmetics; he flattered them, not that he would make them young again (which he modestly confessed was beyond him) but that their beauty would be preserved by means of a wash which, he said, cost him a lot of money, but which he gave away freely.

He had contrived to gain the favour of Madame de Pompadour, who had spoken about him to the king, for whom he had made a laboratory, in which the monarch — a martyr to boredom — tried to find a little pleasure or distraction, at all events, by making dyes. The king had given him a suite of rooms at Chambord, and a hundred thousand francs for the construction of a laboratory, and according to St. Germain the dyes discovered by the king would have a materially beneficial influence on the quality of French fabrics.

This extraordinary man, intended by nature to be the king of impostors and quacks, would say in an easy, assured manner that he was three hundred years old, that he knew the secret of the Universal Medicine, that he possessed a mastery over nature, that he could melt diamonds, professing himself capable of forming, out of ten or twelve small diamonds, one large one of the finest water without any loss of weight. All this, he said, was a mere trifle to him. Notwithstanding his boastings, his bare-faced lies, and his manifold eccentricities, I cannot say I thought him offensive. In spite of my knowledge of what he was and in spite of my own feelings, I thought him an astonishing man as he was always astonishing me.[15]

In 1779 St. Germain arrived in Altona in Schleswig. Here he made an acquaintance with Prince Charles of Hesse-Kassel, who also had an interest in mysticism and was a member of several secret societies. The Count showed the Prince several of his gems and he convinced the latter that he had invented a new method of colouring cloth. The Prince was impressed and installed the Count in an abandonded factory at Eckernförde he had acquried especially for the Count, and supplied him with the needed materials and cloths that St. Germain needed to proceed to with the project.[16] The two met frequently in the following years, and the Prince outfitted a laboratory for alchymistic experiments in his nearby summerresidence Louisenlund, where they, among other things, coorporated in creating gemstones and jewelry. The Prince later recounts in a letter that he was the only person in whom the Count truly confided in.[17] He told the Prince that he was the son of the Transylvanian Prince Francis II Rákóczi, and that he had been 88 years of age when he arrived in Schleswig.[18]

The Count died in his residence in the factory on the 27th February 1784, while the Prince was staying in Kassel, and the death was recorded in the register of the St. Nicolai Church in Eckernförde.[19] He was buried March 2 and the cost of the burial was listed in the accounting books of the church the following day.[20] On April 3 the same year, the mayor and the city council of Eckernförde issued an official proclamation about the auctioneering off of the Count's remaining effects in case no living relative would appear within a designated time period to lay claim on them.[21] Prince Charles donated the the factory to the crown and it was afterwards converted into a hospital.

The best-known biography is Isabel Cooper-Oakley's The Count of St. Germain (1912), which gives a satisfactory biographical sketch. It is a compilation of letters, diaries and private records written about the Count by members of the French aristocracy who knew him in the 18th century. Another interesting biographical sketch can be found in The History of Magic, by Eliphas Levi, originally published in 1913.[24]

Myths, legends and speculations about St. Germain began to be widespread in the late 19th and early 20th centuries, and continue today. They include beliefs that he is immortal, the Wandering Jew, an alchemist with the "Elixir of Life", a Rosicrucian, and that he prophesied the French Revolution. He is said to have met the forger Giuseppe Balsamo (alias Cagliostro) in London and the composer Rameau in Venice. Some groups honor Saint Germain as a supernatural being called an Ascended Master.

American author Chelsea Quinn Yarbro has written more than 30 novels about the Count Saint-Germain, who in this work is a vampire, and added the few known facts about the historical figure.

In The Secrets of the Immortal Nicholas Flamel, the count plays a role as Flamel's student and is immortal, living in Paris with his wife, Jeanne d'Arc.