Procopius
This article is about the historian and author of the "Anecdota". For other uses, see Procopius (disambiguation).

Procopius of Caesarea (Latin: Procopius Caesarensis, Greek: Προκόπιος ὁ Καισαρεύς; c. AD 500 – c. AD 565) was a prominent Byzantine scholar from Palestine. Accompanying the general Belisarius in the wars of the Emperor Justinian I, he became the principal historian of the 6th century, writing the Wars of Justinian, the Buildings of Justinian and the celebrated Secret History. He is commonly held to be the last major historian of the ancient world. 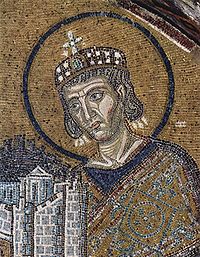 Emperor Constantine I presents a representation of the city of Constantinople as tribute to an enthroned Mary and Christ Child in this church mosaic. Hagia Sophia, c. 1000

Apart from his own writings, the main source for Procopius' life is an entry in the Suda,[1] a 10th century Byzantine encyclopedia that tells nothing about his early life. He was a native of Caesarea in Palaestina Prima[2] (modern Israel). He would have received a conventional élite education in the Greek classics and then rhetoric,[3] perhaps at the famous School of Gaza,[4] may have attended law school, possibly at Berytus (modern Beirut) or Constantinople,[5] and became a rhetor (barrister or advocate).[1] He evidently knew Latin, as was natural for a man with legal training.[6] In 527, the first year of Eastern Roman Emperor Justinian I's reign, he became the adsessor (legal adviser) for Belisarius, Justinian's chief military commander who was then beginning a brilliant career.[7]

Procopius was with Belisarius on the eastern front until the latter was defeated at the Battle of Callinicum in AD 531[8] and recalled to Constantinople.[9] Procopius witnessed the Nika riots of January, 532, which Belisarius and his fellow general Mundo repressed with a massacre in the Hippodrome.[10] In 533, he accompanied Belisarius on his victorious expedition against the Vandal kingdom in North Africa, took part in the capture of Carthage, and remained in Africa with Belisarius' successor Solomon the Eunuch when Belisarius returned to Constantinople. Procopius recorded a few of the extreme weather events of 535-536, although these were presented as a backdrop to Byzantine military activities, such as a mutiny, in and near Carthage.[11] He rejoined Belisarius for his campaign against the Ostrogothic kingdom in Italy and experienced the Gothic siege of Rome that lasted a year and nine days, ending in mid-March, 538. He witnessed Belisarius' entry into the Gothic capital, Ravenna, in 540. Book Eight of The Wars of Justinian, and the Secret History, suggest that his relationship with Belisarius seems to have cooled thereafter. When Belisarius was sent back to Italy in 544 to cope with a renewal of the war with the Goths, now led by the able king Totila, Procopius appears to have no longer been on Belisarius' staff.

It is not known when Procopius himself died, and many historians (James Howard-Johnson, Averil Cameron, Geoffrey Greatrex) date his death to 554, but in 562 there was an urban prefect of Constantinople who happened to be called Procopius. In that year, Belisarius was implicated in a conspiracy and was brought before this urban prefect. 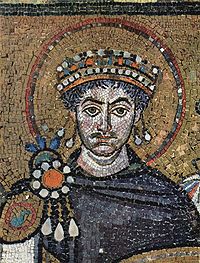 The writings of Procopius are the primary source of information for the rule of the Roman emperor Justinian. Procopius was the author of a history in eight books of the wars fought by Justinian I, a panegyric on Justinian's public works throughout the empire, and a book known as the Secret History (Greek: Anekdota) that claims to report the scandals that Procopius could not include in his published history.

The Wars of Justinian

Procopius' Wars of Justinian (Greek: Ὑπέρ τῶν πολέμων λόγοι, Latin: De Bellis, "About the Wars") is clearly his most important work, although it is not as well-known as the Secret History. The first seven books, which may have been published as a unit, seem to have been largely completed by 545, but were updated to mid-century before publication, for the latest event mentioned belongs to early 551. The first two books (often known as the Persian War, Latin De Bello Persico) deal with the conflict between the Romans and Sassanid Persia in Mesopotamia, Syria, Armenia, Lazica and Caucasian Iberia (roughly modern-day Georgia). It details the campaigns of the Sasanian Shah Kavadh I, the 'Nika' revolt in Constantinople in 532, the war by Kavadh's successor, Khosrau I, in 540 and his destruction of Antioch and the transportation of its inhabitants to Mesopotamia, and the great plague that devastated Constantinople in 542. They also cover the early career of the Roman general Belisarius, Procopius' patron, in some detail. The next two books, the Vandal War (Latin De Bello Vandalico), cover Belisarius' successful campaign against the Vandal kingdom in Roman Africa. The remaining books cover the Gothic War (Latin De Bello Gothico), the campaigns by Belisarius and others to recapture Italy, then under the rule of the Ostrogoths. This includes accounts of the sieges of Naples and Rome.

Later, Procopius added an eighth book (Wars VIII or Gothic War IV), which brings the history to 552/553, when a Roman army led by the eunuch Narses finally destroyed the Ostrogothic kingdom. This eighth book covers campaigns both in Italy and on the Eastern frontier.

The Wars of Justinian was influential on later Byzantine history-writing.[12] A continuation of Procopius' work was written after Procopius' death by the poet and historian Agathias of Myrina. 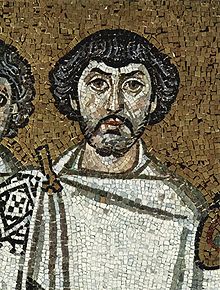 Belisarius may be this bearded figure on the right of Emperor Justinian I in the mosaic in the Church of San Vitale, Ravenna, which celebrates the reconquest of Italy by the Roman army under the skillful leadership of Belisarius

The famous Secret History (Lat. Historia Arcana) was discovered centuries later in the Vatican Library[13] and published by Niccolò Alamanni in 1623 at Lyons. Its existence was already known from the Suda, which referred to it as the Anekdota (Greek: Ἀνέκδοτα, Latin Anecdota, "unpublished writings"). The Secret History covers roughly the same years as the first seven books of the History of Justinian's Wars and appears to have been written after they were published. Current consensus generally dates it to 550 or 558, or maybe even as late as 562.

The Secret History reveals an author who had become deeply disillusioned with the emperor Justinian and his wife, Empress Theodora, as well as Belisarius, his former commander and patron, and Antonina, Belisarius' wife. The anecdotes claim to expose the secret springs of their public actions, as well as the private lives of the emperor, his wife and their entourage. Justinian is raked over the coals as cruel, venal, prodigal and incompetent; as for Theodora, the reader is treated to the most detailed and titillating portrayals of vulgarity and insatiable lust combined with shrewish and calculating mean-spiritedness.

Among the more titillating (and doubtful) revelations in the Secret History is Procopius' account of Theodora's thespian accomplishments:

Often, even in the theatre, in the sight of all the people, she removed her costume and stood nude in their midst, except for a girdle about the groin: not that she was abashed at revealing that, too, to the audience, but because there was a law against appearing altogether naked on the stage, without at least this much of a fig-leaf. Covered thus with a ribbon, she would sink down to the stage floor and recline on her back. Slaves to whom the duty was entrusted would then scatter grains of barley from above into the calyx of this passion flower, whence geese, trained for the purpose, would next pick the grains one by one with their bills and eat.[14]

Her husband Justinian, meanwhile, was a monster whose head could suddenly vanish, at least according to this passage:

And some of those who have been with Justinian at the palace late at night, men who were pure of spirit, have thought they saw a strange demoniac form taking his place. One man said that the Emperor suddenly rose from his throne and walked about, and indeed he was never wont to remain sitting for long, and immediately Justinian's head vanished, while the rest of his body seemed to ebb and flow; whereat the beholder stood aghast and fearful, wondering if his eyes were deceiving him. But presently he perceived the vanished head filling out and joining the body again as strangely as it had left it.[15]

The Buildings of Justinian 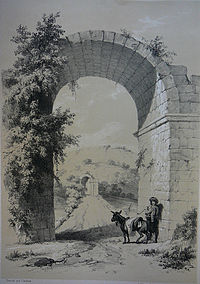 Procopius' Buildings of Justinian (Greek: Περί Κτισμάτων, Latin: De Aedificiis, "On Buildings") is a panegyric on Justinian's building activity in the empire.[16] The first book may date to before the collapse of the first dome of Hagia Sophia in 557, but some scholars[17] think that it is possible that the work postdates the building of the bridge over the Sangarius in the late 550s. The Peri ktismaton (or De Aedificiis) tells us nothing further about Belisarius, but it takes a sharply different attitude towards Justinian. He is presented as an idealised Christian emperor who built churches for the glory of God and defenses for the safety of his subjects and who showed particular concern for the water supply. He built new aqueducts as well as restoring those that had fallen into disuse.

Historians consider Buildings to be an incomplete work, due to evidence of the surviving version being a draft with two possible redactions.[16][18]

Theodora, who was dead when this panegyric was written, is mentioned only briefly, but Procopius' praise of her beauty is fulsome. The panegyric was likely written at Justinian's behest, however, and it is doubtful that the sentiments expressed are sincere.

Due to the panegyrical nature of the The Buildings, historians have discovered in several occasions discrepancies between claims made by Procopius and other primary sources. A primary example is in Procopius starting the reign of Justinian in 518, which was actually the start of the reign of Justin I, Justinian’s predecessor and uncle. This discrepancy can be seen as part of Procopius’ panegyric method, as it allowed him to credit buildings constructed under the rule Justin I as Justinian’s accomplishments. In this context can be mentioned the renovations to the walls of Edessa after a flood in 525, along with several churches in the region, all of which were completed under Justinian's uncle. Similarly, Procopius falsely credits Justinian for the extensive re-fortifications made in the cities of Tomis and Histria in Scythia Minor, along the Danubian frontier, actual accomplishments of Anastasius I, predecessor of Justin I.[19]

Procopius belongs to the school of late antique secular historians who continued the traditions of the Second Sophistic; they wrote in Attic Greek, their models were Herodotus and especially Thucydides, and their subject matter was secular history. They avoided vocabulary unknown to Attic Greek and inserted an explanation when they had to use contemporary words. Thus Procopius explains to his readers that ekklesia, meaning a Christian church, is the equivalent of a temple or shrine and that monks are "the most temperate of Christians...whom men are accustomed to call monks." (Wars 2.9.14; 1.7.22) In classical Athens, monks had been unknown and an ekklesia was the assembly of Athenian citizens that passed the laws.

The secular historians eschewed the history of the Christian church, which they left to ecclesiastical history—a genre that was founded by Eusebius of Caesarea. However, Averil Cameron has argued convincingly that Procopius' works reflect the tensions between the classical and Christian models of history in 6th century Byzantium. This is supported by Mary Whitby's analysis of Procopius’ Book I depiction of Constantinople and the Church of Hagia Sophia in comparison to contemporary pagan panegyrics. Procopius can be seen as depicting Justinian as essentially God’s Vicegerent, making the case for Buildings being a primarily religious panegyric.[20]

A number of historical novels based on Procopius' works (along with other sources) have been written, one of which, Count Belisarius, was written by poet and novelist Robert Graves in 1938.

This article is based on an earlier version by James Allan Evans, originally posted at Nupedia.