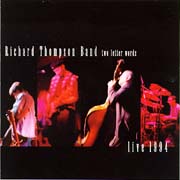 
__NOTOC__"Two Letter Words" is a by Richard Thompson.

Continuing his policy, begun with the "" album, of releasing high quality alternatives to bootlegs, Richard Thompson released this album in 1996. The album was recorded during his 1994 tour of America.

The 1994 tour marked the debut of a new look live band for Thompson with multi-instrumentalist Pete Zorn and the section of and (no relative) providing the backing. Subsequent touring bands have had largely the same lineup and have been built around Zorn and Danny Thompson.

"Two letter words" is highly regarded by Thompson fans. It includes eight tracks from the then newly released "", and thus serves as an interesting contrast with the original album's controversial production.

"Two Letter Words" is now out of print. It was released under a deal with , Thompson's label at the time, which permitted him to supplement his income with albums not recorded in the studio provided that they were not made available in retail outlets and were pressed in limited quantities. There are no plans to re-issue this album.

All songs written by Richard Thompson