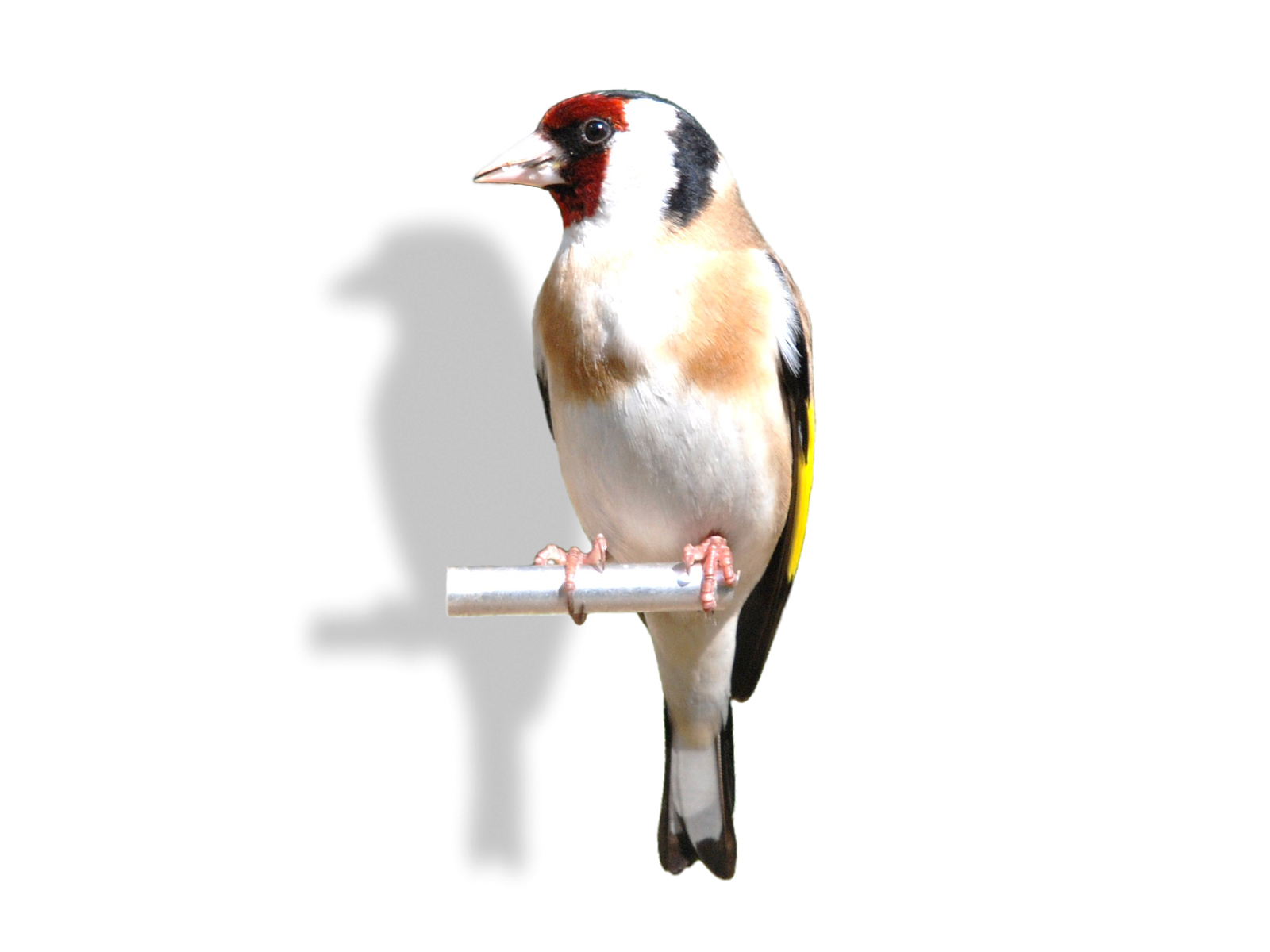 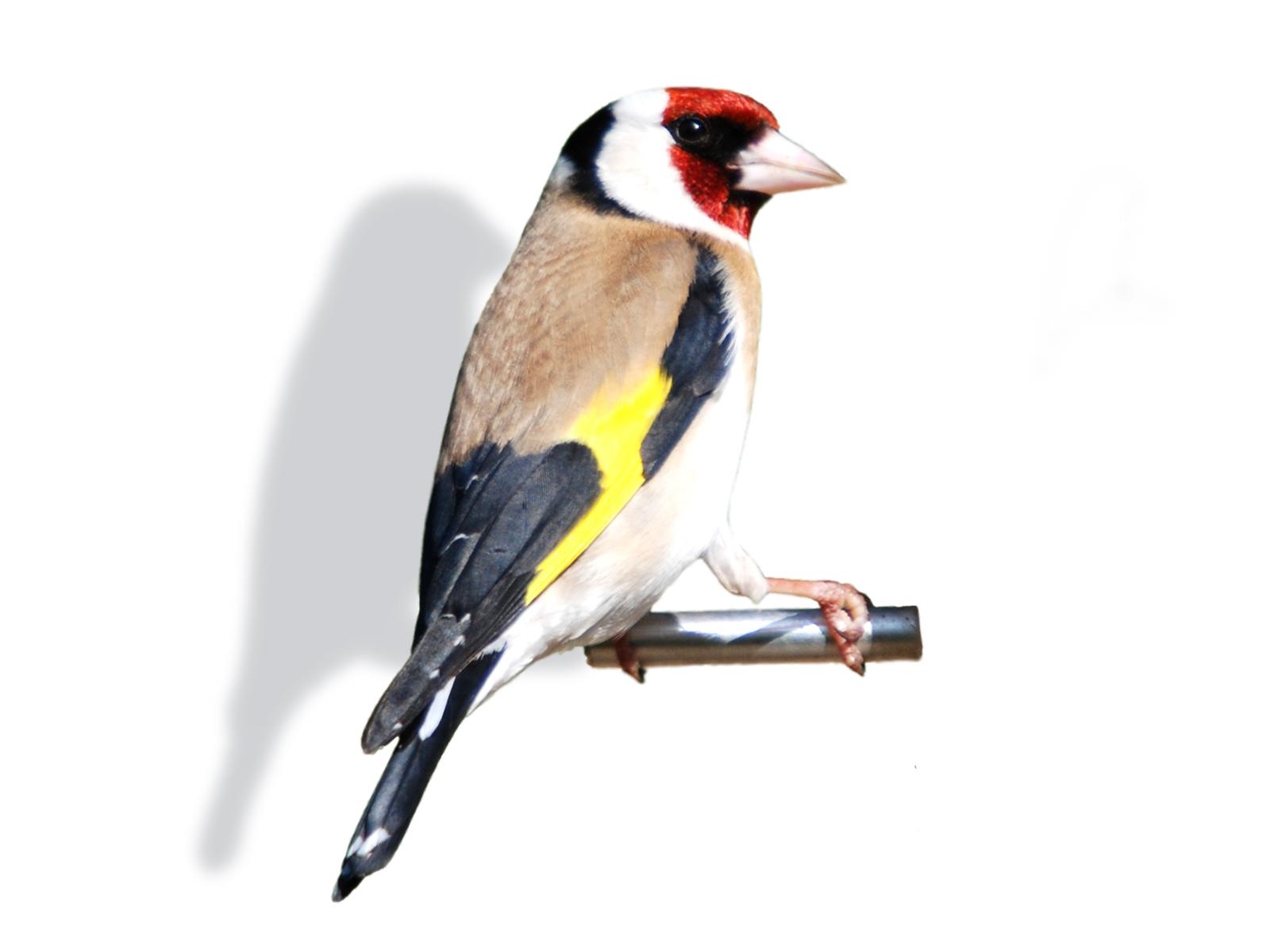 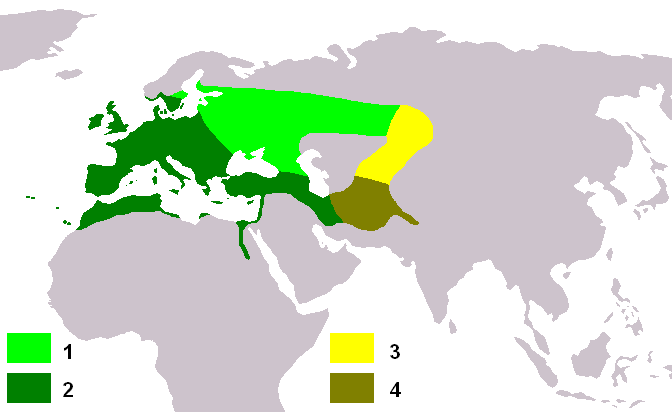 The Goldfinch or European Goldfinch ("Carduelis carduelis") is a small in the family.

It breeds across , , and western and central , in open, partially wooded lowlands. It is resident in the milder west of its range, but migrates from colder regions. It will also make local movements, even in the west, to escape bad weather. It has been introduced to many areas of the world (Snow and Perrins 1998).

The average Goldfinch is 12-13 cm long with a wingspan of 21-25 cm and a weight of 14 to 19 grams. The sexes are broadly similar, with a red face, black and white head, warm brown upperparts, white underparts with buff flanks and breast patches, and black and yellow wings. On closer inspection male Goldfinches can often be distinguished by a larger, darker red mask that extends just behind the eye. In females, the red face does not reach the eye. The ivory-coloured bill is long and pointed, and the tail is forked. Goldfinches in breeding condition have a white bill, with a greyish or blackish mark at the tip for the rest of the year. Juveniles have a plain head and a greyer back but are unmistakable due to the yellow wing stripe. Birds in central Asia ("caniceps" group) have a plain grey head behind the red face, lacking the black and white head pattern of European and western Asian birds.

The food is small seeds such as s (the Latin name is from "carduus", thistle) and teasels, but insects are also taken when feeding young. It also regularly visits bird feeders in winter. They nest in the outer twigs of tall leafy trees, laying four to six eggs which hatch in 11-14 days.

In the winter they group together to form flocks of up to about 40 birds, occasionally more.

In earlier times, the Goldfinch was kept as a cagebird for its song. Escapes from captivity and deliberate releases have colonised southeastern and .

As a garden bird

Goldfinches are attracted to back gardens in and with specially designed s containing (commercially described as seed). This seed of an annual from is small and black, and it seems, irrestible to goldfinches. It is high in oils. Small oval slits are introduced into a cylinder, and at these apertures, goldfinches feed while perching on small perches perpendicular to the vertical axis of the birdfeeder.

Goldfinches are commonly kept and bred in captivity around the world because of their distinctive appearance and pleasant song. The Goldfinch males are commonly crossed with Canary females with the intention to produce male mules with beautiful singing voices, that often capture the best singing attributes of both breeds.

Because of the thistle seeds it eats, in Christian symbolism the goldfinch is associated with the Passion and 's Crown of Thorns. The goldfinch, appearing in pictures of the Madonna and the Christ Child, represents the foreknowledge Jesus and Mary had of the Crucifixion. In the or Madonna of the Goldfinch painted (c. 1505-1506) by the Italian renaissance artist , offers the goldfinch to Christ in warning of his future.In Barocci's "Holy Family" a goldfinch is held in the hand of who holds it high out of reach of an interested cat. In 's "Madonna and Child", a goldfinch flutters in the hand of the Christ Child.

It is also an emblem of endurance, fruitfulness, and persistence. Because it symbolizes the Passion, the goldfinch is considered a "saviour" bird and may be pictured with the common fly (which represents sin and disease). During medieval times, this bird was used by some as a charm to ward off the plague. [http://www.nzbirds.com/birds/goldfinch.html]