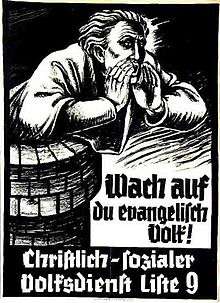 The Christian Social People's Service (in German: Christlich-Sozialer Volksdienst) was a Protestant conservative political party in the Weimar Republic.

The CSVD was founded in December 1929 through the merger of two Protestant political formations: the Christlich-soziale Reichsvereinigung (Christian Social Reich Association) and the Christlicher Volksdienst (Christian People's Service). Both had emerged out of dissatisfaction amongst Protestants towards the developments within the German National People's Party. The two groups differed on many issues, such as the role of the Republic, but were able to keep organizational unity. The CSVD portrayed itself as a Protestant version of the Catholic Centre and was mainly supported by middle-class elements.

The CSVD contested the 1930 and 1932 parliamentary elections; the party CSVD formed a joint parliamentary group with the Christlich-Nationale Bauern- und Landvolkpartei (Christian National Peasants' and Rural Peoples Party) in the Reichstag. After the Nazi take-over in 1933, the CSVD was dissolved.

The President of the Federal Republic of Germany Gustav Heinemann (1969–74) was a member of CSVD during the Weimar Republic.