A Change Is Gonna Come (song)

A Change Is Gonna Come (song) 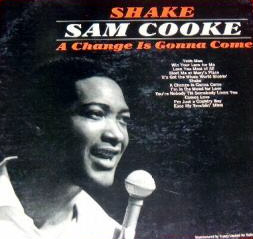 "A Change Is Gonna Come" is a 1964 single by singer-songwriter , written and first recorded in 1963 and released under the label shortly after his death in late 1964. Though only a modest hit for Cooke in comparison with his previous singles, the song came to exemplify the sixties Civil Rights Movement. The song has gained in popularity and critical acclaim in the decades since its release.

Cooke was greatly moved upon hearing 's "" in 1963 and was reportedly in aweFact|date=June 2008 that such a poignant song about racism in America could come from someone who was white. While on tour in May 1963, and after speaking with sit-in demonstrators in following a concert, Cooke returned to his tour bus and wrote the first draft of what would become "A Change Is Gonna Come."

In a sense, "A Change Is Gonna Come" is an answer to Dylan's "Blowin' in the Wind", as well as a song of hope for the Civil Rights Movement. The hypothetical questions posed by Dylan, most obvious being "how many years can some people exist, before they're allowed to be free?", were answered by an implied "Fewer than you think." Though Cooke recognized "it's been a long/a long time coming", the song states that change is inevitable. A similar sentiment was echoed by Dylan in "", written and released after "A Change Is Gonna Come." The song also reflected much of Cooke's own inner turmoil. Known for his polished image and light-hearted songs such as "You Send Me" and "Twistin' the Night Away", he had long felt the need to address the situation of discrimination and racism in America, especially the southern states. However, his image and fears of losing his largely white fan base prevented him from doing so.

The song, very much a departure for Cooke, reflected two major incidents in his life. The first was the death of Cooke's eighteen-month-old son, Vincent, who died of an accidental drowning in June of that year. The second major incident came on , , when Cooke and his band tried to register at a "whites only" motel in and were summarily arrested for disturbing the peace. Both incidents are represented in the weary tone and lyrics of the piece, especially the final verse: "there have been times that I thought I couldn't last for long/but now I think I'm able to carry on/It's been a long time coming, but I know a change is gonna come."

After remaining confined to Cooke's notebooks for months of touring, "A Change Is Gonna Come" was finally recorded on , . Recording took place at the RCA Studios in during sessions for Cooke's 1964 album, "Ain't That Good News".

According to author Peter Guralnick's biography of Cooke, "Dream Boogie", Cooke gave arranger free rein on song's musical arrangement. Hall came up with a dramatic orchestral backing highlighted by a mournful French horn. For his vocal, Cooke reached back to his gospel roots to sing the song with an intensity and passion never heard before on his pop recordings.

The song made its first appearance on "Ain't That Good News," the last album to be released within Cooke's lifetime. The LP did well, peaking at number 34 on the Billboard Pop Albums chart, making it more successful than Cooke's previous LP, 1963's "Night Beat".

However, Cooke and his new manager thought the song deserved greater exposure. According to Guralnick's book, Klein persuaded Cooke to sing "A Change Is Gonna Come" on his , appearance on . Cooke sang the song; unfortunately, any impact it made was dimmed by ' history-making appearance on just two days later. In a further misfortune, NBC did not save the tape of Cooke's performance, which has never turned up in private collections either. had bypassed "Change" for Cooke's early 1964 single, instead releasing the tracks "Good Times" and "(Ain't That) Good News". But the company agreed to put the song out as a single late in the year, as the B-side to Cooke's latest potential hit, "Shake." At one of his last recording sessions, Cooke approved an edit to the song that would shorten it by about 30 seconds, increasing its chance for airplay on American radio stations.

Finally given proper attention, "A Change Is Gonna Come" became a sensation among the black community, and was used an anthem for the ongoing civil rights protests. On R&B radio, the song peaked at number 9 on the Billboard Black Singles chart, and topped many local playlists, most notably in Chicago. The song had more limited success on radio. By February 1965, the song had peaked at number 31 on the Billboard Pop Singles chart and fallen off. Cooke, however, did not live to see the song's commercial success. On , , he was killed at the Hacienda Motel in , under what many consider mysterious circumstances.

Though only a moderate success sales-wise, "A Change Is Gonna Come" became an anthem for the American Civil Rights Movement, and is widely considered Cooke's best composition. Over the years, the song has garnered significant praise and, in 2005, was voted number 12 by representatives of the music industry and press in "" magazine's 500 Greatest Songs of All Time, and voted number 3 in the webzine 's [http://pitchforkmedia.com/article/feature/37901/The_200_Greatest_Songs_of_the_1960s The 200 Greatest Songs of the 60s.] The song is also among three hundred songs deemed the most important ever recorded by (NPR) and was recently selected by the as one of twenty-five selected recordings to the as of March 2007.

Despite its acclaim, legal troubles have haunted the single since its release. A dispute between Cooke's music publisher, , and record company, , made the recording unavailable for much of the four decades since its release. Though the song was featured prominently in the 1992 film "Malcolm X", it could not be included in the film's soundtrack. By 2003, however, the disputes had been settled in time for the song to be included on the remastered version of "Ain't That Good News", as well as the Cooke anthology "Portrait of a Legend".

"A Change Is Gonna Come" was a precursor to many later socially-conscious singles, including 's lauded "What's Going On". Al Green, a self-professed fan of Cooke, covered the song for the concert celebrating the 1996 opening of the in . Green's live rendition was included in the soundtrack to the 2001 Michael Mann film "Ali". recorded a version specially for an episode of the same title of the television drama "The West Wing". The captured their performance of the song on their 2003 DVD Live at the .

Other notable artists who have covered the song include , , (in a 1970 medley with ' ""), , , , Terence Trent D'Arby, , the , the , , , , , , Johnny P, , , , and . has used the song in support of 's nomination for . In recent years, the song has served as a sample for rappers (1996), (2003), Papoose (2006), (2007) "Long Time Coming (remix)" and 's album also features a similar opening as the song. On their album "The Reunion" hip-hop artists Capone-N-Noreaga used an excerpt from the song on the opening track which shares the same title as the Cooke original. British soul singer says the song is her all time favourite and has performed it live many a time; most notably on 'Later with '. On , , during the seventh season of "", the song was sung by contestant as the remaining top 4. Singer Seal also recently covered this song for his new album "Soul". It has been released as the leading single for the album. Mercado also covered the song on .

* Written by Sam Cooke.
* Produced by and .
* Instrumentation by (arrangement and conductor of orchestra), Larry Hilton, and (drums).
* Engineering by

* [http://www.npr.org/templates/story/story.php?storyId=17267529 Sam Cooke's Swan Song of Protest] NPR special on the selection of the song to the