The Spook Who Sat by the Door

The Spook Who Sat by the Door

Infobox_Film
name = The Spook Who Sat By The Door 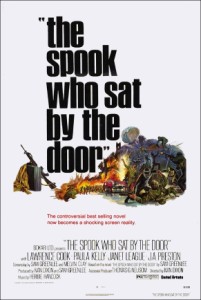 "The Spook Who Sat by the Door" is both a novel by , first published in 1969 (in the UK by Allison & Busby), and a 1973 film of the same name. An explosive, award-winning novel in the black literary tradition, "The Spook Who Sat by the Door" is both a satire of the civil rights struggle in the United States of the late 1960s and a serious attempt to focus on the issue of black militancy. Dan Freeman, the titular protagonist, is enlisted in the Central Intelligence Agency's elitist espionage program as its token black. Upon mastering agency tactics, however, he drops out to train young Chicago blacks as "Freedom Fighters." As a story of one man's reaction to ruling-class hypocrisy, the book is autobiographical and personal. As a tale of a man's reaction to oppression, it is universal.

The novel and the film also dramatize the CIA's history of giving training to persons and/or groups who later utilize their specialized intelligence training against the agency.

The novel takes place in the early 1970s in Chicago. Dan Freeman (Lawrence Cook) is a who is enlisted in the as the first black man to be a secret agent; he is hired as the Top Secret Reproduction Center Sections Chief. Freeman becomes the token black person for those within the CIA, enabling them to use the fact that they hired a black man as a sign of integration and progress. After training and learning about , weaponry, communications and subversion, Freeman quits his job and returns to work in the social services in Chicago. Upon his return though, Freeman immediately begins recruiting young black men living in the inner city of Chicago to become “Freedom Fighters” teaching them all of the guerrilla warfare tactics that he learned from the CIA. They become a group with Freeman as the secret leader. The “Freedom Fighters” set out to ensure that black people truly live freely within the United States by partaking in both violent and non-violent actions throughout Chicago. The “Freedom Fighters” of Chicago begin spreading the word about their guerrilla warfare tactics across the United States; as Freeman says, “What we got now is a colony, what we want is a new nation.” As revolt and a war of liberation continues in the inner city of Chicago, the National Guard and the police desperately try to stop the “freedom fighters.” This film provides discussions around black militancy and the violent reactions that took place by white America in response to the progress of the .

Greenlee’s novel continues to be a very important work reflecting upon the harsh realities of African Americans living in the United States in the face of racism, violence and oppression. Greenlee’s novel is, in a sense, a manual on how to be a successful revolutionary by beating the system at its own game (Peavy, 222). Greenlee demonstrates through his character Dan Freeman, how important cooperation is among oppressed peoples in the fight for equality and freedom (Joiner, 41). Greenlee, years after the release of his book and the film, reflects upon the various messages of his work: “One of the things I was saying with that book is that gangs could become the protector of the community rather than predators”(Joiner, 41). He goes on to say, “…the purpose of the film was to encourage blacks to create an action plan to ‘survive in the belly of the beast’ rather than always reacting as victims of a racist society”(Joiner, 41). By working intimately with , Greenlee’s powerful book was transferred to the big screen without losing its strong revolutionary messages. Yet, the film and the book were both received with great hesitation and resistance by certain sectors of society.

The political atmosphere in the United States during the time of the book's publication was particularly contentious as , , and gay rights movements became visible in the public sphere. It is not surprising that the filmmakers felt compelled to make a movie that addressed the presence of blacks in politics as well as portrayed black unity and strength. Furthermore, prior to the movie’s release, was assassinated, as were other significant civil rights figures in the sixties. , whose company helped to release "Spook" on DVD, said to the in 2004:"When you look back at the times...Martin Luther King was assassinated, , . Black people were really angry and frustrated; we were tired of seeing our leaders killed. What do we do? Do we have a revolution? There is nothing that comes close to this movie in terms of black radicalism." (Beale, 2004)Reid notes how "Spook" served as a reactionary piece in the way that it addressed the feelings of black people during the late sixties and early seventies.Soon after its release, "The Spook Who Sat By the Door" was removed from theaters as a result of its politically controversial message. Prior to its release on DVD in 2004, it was a relatively difficult film to get. In a feature for , reported that the director of the film, , admitted that would not show the film in a way that would allow its political message to come through when clips were viewed prior to the film’s public release. “Dixon says when United Artists screened the finished product and saw a version of political Armageddon, they were stunned” (NPR article, 2004). Perhaps it is a testament to the powerful message of the film that it was deemed potentially too influential, as if the film would encourage black people to militantly rebel against the white power structure.

Film critics agree that "The Spook Who Sat By the Door" is a significant movie in that it presents a highly politically charged vision of black people. In a review for City Paper Philadelphia Sam Adams recognizes the importance of "Spook’s" questioning of politics and race in America, despite some other technical weaknesses. Adams writes: “the movie's sly polemicism has arguably aged better than the revolutionary rhetoric that inspired it.” In this way, although the film’s militant messages are not necessarily applicable today, its controversial questioning of politics and race is still significant. Adams also notes the conflict within "Spook" in its use of stereotypical imagery along with its revolutionary political message: “Hailed as a landmark and denounced as racist, 'The Spook Who Sat by the Door' is, at the very least, still worth arguing over” (Adams, 2004).Similarly, ’s 1973 review of the film for notes the film’s use of stereotypes in order to convey the message at the heart of it. “The rage it projects is real, even though the means by which that rage is projected are stereotypes. Black as well as white”(Canby, 1973). Canby also notes the difficulty he had with reviewing the film in that although it is not technically impressive or innovative, its political and racial significance is not to be underestimated or dismissed. “...'The Spook Who Sat by the Door' is a difficult work to judge coherently. It is such a mixture of passion, humor, hindsight, prophecy, prejudice and reaction that the fact that it's not a very well-made movie, and is seldom convincing as melodrama, is almost beside the point” (Canby, 1973).

The word "Spook" in the title has a dual meaning: it has been used as a against Blacks, as well as a slang term for a .