Gish was born in Dayton, Ohio. She had an older sister, Lillian. The Gish sisters' mother, Mary Robinson McConnell "Gish", supported the family after her husband, James Leigh Gish, abandoned the family. When they were old enough, Dorothy and Lillian were brought into their mother's act, and they also modeled. In 1912, their childhood friend, actress Mary Pickford, introduced them to director D.W. Griffith, and the sisters began acting at the Biograph Studios. Dorothy and Lillian Gish both debuted in Griffith's An Unseen Enemy. Dorothy would go on to star in over 100 short films and features, many of them with Lillian.

Linda Arvidson, Griffith's wife recalled in her autobiography, When The Movies Were Young:

Lillian and Dorothy just melted right into the studio atmosphere without causing a ripple. For quite a long time they merely did extra work in and out of pictures. Especially Dorothy, as Mr. Griffith paid her no attention whatsoever and she kept on crying and trailed along. She also continued to play in many one and two reel Biograph films, learning the difficult technique of silent film acting, and preparing for opportunity when it came. Dorothy was still a person of insignificance, but she was a good sport about it; a likable kid, a bit too perky to interest the big director, so her talents blushed unnoticed by Mr. Griffith. In 'The Unseen Enemy' the sisters made their first joint appearance. Lillian regarded Dorothy with all the superior airs and graces of her rank. At a rehearsal of 'The Wife', of Belasco and DeMille fame, in which picture I played the lead, and Dorothy the ingénue, Lillian was one day an interested spectator. She was watching intently, for Dorothy had had so few opportunities, and now was doing so well, Lillian was unable to contain her surprise, and as she left the scene she said: 'Why, Dorothy is good; she's almost as good as I am.' Many more than myself thought Dorothy was better.

In Hearts of the World (1918), a film about World War I and the devastation of France, Dorothy found her first foothold, striking a personal hit in a comedy role that captured the essence of her sense of humor. As the “little disturber”, a street singer, her performance was the comic highlight of the film, and her characterization in this role catapulted her into a career as a star of comedy films.

Griffith did not use Dorothy in any of his earliest epics, but while he spent months working on The Birth of a Nation and Intolerance, Dorothy was featured in many feature-length films made under the banner of Triangle and Mutual releases. They were directed by young Griffith protégés such as Donald Crisp, James Kirkwood, and Christy Cabanne. Elmer Clifton directed a series of seven Paramount-Artcraft comedies with Dorothy that were so successful and popular that the tremendous revenue they raked in helped to pay the cost of Griffith’s expensive epics. These films were wildly popular with the public and the critics. She specialised in pantomime and light comedy, while her sister appeared in tragic roles. Dorothy became famous in this long series of Griffith-supervised films for the Triangle-Fine Arts and Paramount companies from 1918 through 1920, comedies that put her in the front ranks of film comediennes. Almost all of these films are now considered to be lost films.

"And So I Am a Comedienne", an article published in Ladies Home Journal in July 1925, gave Dorothy a chance to recall her public persona: “And so I am a comedienne, though I, too, once wanted to do heroic and tragic things. Today my objection to playing comedy is that it is so often misunderstood by the audiences, both in the theater and in the picture houses. It is so often thought to be a lesser art and something which comes to one naturally, a haphazard talent like the amateur clowning of some cut-up who is so often thought to be ‘the life of the party’. In the eyes of so many persons comedy is not only the absence of studied effect and acting, but it is not considered an art.”

When the film industry converted to talking pictures, Dorothy made one, Wolves (1930), but then chose to take a respite from film work and return to the American stage where she had spent her childhood. George Cukor directed her in Young Love, and the light comedy found success with New York audiences as well as those on the road. A London production followed with equal success.

In 1939, both Dorothy and Lillian Gish found the role of a lifetime. “Dorothy and I went to see the New York production of Life With Father, starring Howard Lindsay and Dorothy Stickney,” Lillian wrote in her autobiography. “After the performance I said: ‘This is the play we’ve been waiting for to take through America.’” Lillian predicted the popular play would be a perfect showcase for all the people who had seen the hundreds of films featuring Mary Pickford, Dorothy, and herself. She was introduced to Lindsay backstage, and immediately surprised the producers with her enthusiastic desire to head the first company to go on the road, with Dorothy taking the same part for the second road company, and the movie rights for Mary Pickford. Pickford did not make the film version, but the Gish sisters took the two road companies on extensive tours.

Television in the 1950s offered many actors the opportunity to appear in plays broadcast live. Dorothy ventured into the new medium, appearing on NBC’s Lux Video Theatre on the night of November 24, 1955, in a production of Miss Susie Slagle’s. The play had been a film in 1945 with her sister, Lillian, made for Paramount Pictures Corporation.

“The truth is, that she did not know what she really wanted to do,” wrote her sister, Lillian, in her autobiography. “She had always had trouble making decisions and assuming responsibilities, In some ways she had never grown up. She was such a witty and enchanting child that we enjoyed indulging her. First Mother and I spoiled her and later Reba, her friend, and her husband Jim. Reba called Dorothy ‘Baby’ and so did Jim. With the best intentions in the world, we all helped to keep her a child.”

From 1930 until her death, she only appeared in five more movies. Our Hearts Were Young and Gay (1944) was a hit for Paramount. The Magnificent Yankee (1946) presented Dorothy at the Royale Theater. Lillian noted in her pictorial book, Dorothy and Lillian Gish, John Chapman's review of the film: "Miss [Dorothy] Gish and Mr. Calhern give the finest performances I have ever seen them in. She is a delight and a darling."

Director Otto Preminger cast Dorothy in his 1946 film, Centennial Summer, and she was said to have been amused that she and some of the other stars were allowed to sing Jerome Kern’s music. Mae Marsh appeared in the film in one of her many bit parts. The Whistle at Eaton Falls (1951) was a documentary style film produced by Louis de Rochemont. Dorothy played the widow of a mill owner.

She also made several appearances in anthology television series in the early 1950s. Her final film appearance was in another Otto Preminger film, The Cardinal (1963), in which she portrayed the mother of the title character. 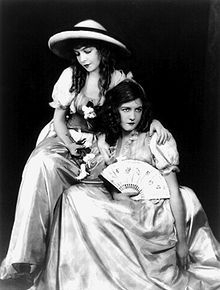 Dorothy (right) with her sister Lillian.

She was married to James Rennie (actor) (1890–1965), a Canadian-born actor who was her co-star in Remodeling Her Husband (filmed in 1920, it was directed by Dorothy's older sister, Lillian, in her only directorial outing). They were married in 1920 in a double ceremony with actress Constance Talmadge and businessman John Piagoglou. They divorced in 1935; Dorothy never remarried.

She died in 1968 from bronchial pneumonia at the age of 70 at a clinic in Rapallo, Italy where she had been a patient for two years, with sister Lillian at her side. Dorothy Gish was entombed in Saint Bartholomew's Episcopal Church in New York City in the columbarium in the undercroft of the church. Her sister Lillian was later interred beside her.

For her contribution as an actress in motion pictures, Dorothy Gish was awarded a star on the Hollywood Walk of Fame at 6385 Hollywood Blvd., Hollywood, California.