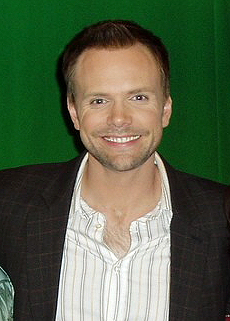 Joel Edward McHale (born , ) is an American best known as the host of "" on E! Entertainment Television. He is also a and .

McHale was born in , , and is of Irish and roots. [http://www.eonline.com/on/personalities/bio/joel.jsp Joel McHale E! Bio] He grew up in the area, graduating from in suburban Seattle in 1990. He received his in History from the in 1995. While at the University of Washington, McHale belonged to the Theta Chi Fraternity. Before completing the Professional Actors Training Program at the University of Washington, he became part of the "" cast, a local sketch-comedy TV show produced in Seattle. From 1993 until 1997 Joel was a member of the improv comedy group at , participating in Theatersports! at the Market Theater located in in downtown Seattle. [ [http://www.unexpectedproductions.org/about.htm International Festival of Improv ] ]

McHale played football at the University of Washington where he was a tight end and was a member of the school's 1991 national championship team [ [http://www.washingtonpost.com/wp-dyn/articles/A22047-2005Feb13.html?sub%3Dnew?=AR THECHAT (washingtonpost.com) ] ] .

After graduating, he moved to Los Angeles and then landed small roles on "", "", and "", and a TV reporter in the dramatic biopic "". He frequently appears as a co-host on "Loveline". He has a long association with , where he has done several plays. He has also done commercials for , , and .

McHale is also a weekly guest on the "" and " Show", and on the " Show" on 94.1 WYSP in Fact|date=April 2008, and is an occasional guest on the [ [http://www.foundrymusic.com/opieanthony/displayheadline.cfm/id/12764/div/opieanthony/headline/Monday_Opie_and_Anthony_Links__Joel_McHale__New_O_A_Videos__Good_bye_Syracuse__Traveling_Virus_Tickets_On_Sale_Now__New_Videos_Online.html Foundrymusic.com Headlines: Monday Opie and Anthony Links: Joel McHale, New O&A Videos, Good-bye Syracuse, Traveling Virus Tickets On Sale Now, New Videos Online ] ] show. He has been a judge on "". He was involved in the American version of the British TV show "". He guest starred as a cast member on the reality show "Thank God You're Here" during the pilot episode and also had a guest part in episode 1.6 of the ABC show "". He also made an appearance in "" as the bank manager. He made a guest appearance on the finale of season 6, when he gave a recap of the show's events in his typical format of jokes made popular on . He is currently filming "The Informant" in Decatur, Illinois in which he plays an FBI Agent.

McHale hosts "", a satirical weekly television show on the E! television network. Throughout the show, he takes the audience through the oddities and ridiculous happenings of the week in television. The show has become a cult hit due to his stinging criticism of the dumbing down of American entertainment as well as for his comedic talent and off-kilter subject material.