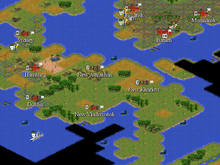 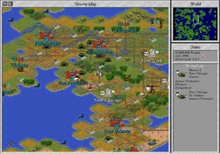 In this screenshot of Civilization II most of the gameworld has been discovered, as can be seen by the "mini-map" located in the upper right of the screen.

Civilization II is similar to the first Civilization, with some changes to the various units, civilizations, world wonders, tile "specials" and technologies. The graphics were changed from a top-down view to an isometric representation.[citation needed] The AI was improved as well, including the elimination of most random events (such as the situation where Wonders of the World were built spontaneously in the original Civilization[citation needed]) by now making the computer player go through the same production requirements as the human player.

Rivers no longer occupy the whole of each tile along its length. The river is just part of each topography square it flows through, adding productive value, defensive bonuses and movement ability.

The game features entirely new concepts, such as firepower and hit points, and changes to some units' abilities and strengths. For instance, engineers and settlers can be automated to improve surrounding areas, but no longer ignore enemy zones of control. Legions cost more to produce but have greater attack and defense values; some new units are added such as stealth bomber and stealth fighter.

The player has the ability to consult the 'High Council' for advice (as long as the player still has the CD in the drive). The council consists of film clips of actors portraying advisors in the areas of the military (a brawny man, often drunk, angry or both; he becomes a stereotypical American general when Modern Age is reached), economics (a smooth-talking merchant, later a snooty and suave businessman), diplomacy (in the Modern Age, a saucy femme fatale with a vaguely Eastern European accent), technological progress (a nerdy scientist), and the people's happiness (an Elvis Presley caricature, wearing sunglasses even in the Ancient period). They often argue with and insult one another, as each advisor's department demands a different set of priorities. The counselors' costumes change with each new era. In many ways, the 'High Council' constitutes a bit of comic relief, especially from the expansionist "military" adviser, who will insist on more troops even when the player has 60 battleships, or during the Medieval Period will sing the last refrain from the 18th Century English traditional song "Down Among the Dead Men", punctuated with a hearty "No complaints, sire!". Amusingly, when the player is experiencing anarchy, the characters begin talking at the same time, interrupting each other, and finally beginning to fight, with all counselor windows shutting down and turning into the "A" symbol of Anarchy.

There are two paths to victory (and bonus points to the score) in this game: to be the last civilization remaining or to build a spaceship and reach Alpha Centauri before any of the other civilizations. The space race can be much more difficult because there are a limited number of turns in the game, which ends in the year 2020. If the spaceship does not reach Alpha Centauri by then, the game will simply end with the current score. The player can continue playing after all civilizations have been conquered, the spaceship has reached its destination, or the year 2020, but there will no longer be any scoring. The sooner a player conquers every other civilization, or the space ship arrives, the better as far as scoring is concerned. However, there are many things that can be done to gain points, so it occasionally is better to hold off victory to gain more points by, say researching extra 'future technologies'.

The scoring system measures the player's performance in the end of each game. Population is a major influence on scoring as each happy citizen contributes two points, each content citizen contributes one point, and each unhappy citizen contributes zero points. This means that higher population yields better scores. Players may increase the luxury rate to the maximum (depending upon their government type) right before the very end of the game in order to increase happiness, maximizing their scores. Additionally, each wonder of the world owned by the player will also add 20 points to their score. Each square with pollution deducts ten points. The length of time there has been peace (no armed conflict or war) up to the end of the game also adds 3 points per turn, up to a maximum of 100 points, and if the player won using a spaceship, additional points are rewarded, based on the amount of people who reached Alpha Centauri alive. The final score will also give a civilization percentage, based on the difficulty level the game was played at (chosen at the very beginning of the game). The higher this percentage is, the better. Finally, a title will be given to the player. Particularly good ones include "Lion-Hearted," "the Great" with the greatest obtainable title being "The Magnificent."

In Civilization II each civilization was led by two leaders, male and female. All the civilizations from the original game returned along with seven new civilizations (Japanese, Celts, Vikings, Spanish, Persians, Carthaginians and Sioux), for a total of 21.

There were two expansion packs that slowly added more features to the game. The first, Conflicts in Civilization, included 20 new scenarios: 12 created by the makers of the game,[3] and 8 "Best of the Net" by fans. It also added an enhanced macro language for scenario scripting, though contained a patch that turned off the original Encarta-style Civilopedia.

The second expansion was Civ II: Fantastic Worlds (a legal dispute arising from Sid Meier's departure prevented the use of the full word "Civilization"). It also added new scenarios that had many unique settings such as one scenario dealing with colonization of Mars, one scenario called Midgard that had Elven, Goblin, Merman, and other civilizations from fantasy. There were also some scenarios based on other Microprose games such as X-Com, Master of Orion, and Master of Magic "Jr." scenarios. Fantastic Worlds also contained a new scenario editor that allowed various units, city improvements, terrain, technology trees, placing triggers, and other additions that enhanced the game.

The original game was re-released in 1997 as Civilization II: Multiplayer Gold Edition, which bundled both prior expansion packs and added options for networked and hotseat play, and features tweaked AI. However, all of the music tracks that were in the original release of Civilization II have been removed - only some of the "new" ones remain. The tweaked AI is also perpetually unfriendly, rendering most diplomatic functions useless.

Civilization II: Test of Time, a remake, was released in 1999 in response to Sid Meier's Alpha Centauri. Test of Time had a new palette and UI, and new features such as animated units, a playable Alpha Centauri to settle, and new campaign modes.

In 2011, researchers at MIT Computer Science and Artificial Intelligence Laboratory and University College London presented a paper at the annual meeting of the Association for Computational Linguistics which demonstrated the ability to improve the ability of a machine-learning system to win at Civilization II by using the text from its official game manual to guide the development of a game-playing strategy.[5][6]

This audio file was created from a revision of Civilization II dated 2010-05-07, and does not reflect subsequent edits to the article. (Audio help)
More spoken articles