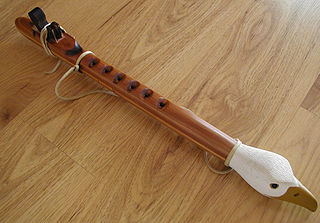 The Native American flute has achieved some measure of fame for its distinctive sound, used in a variety of New Age and world music recordings. The instrument was originally very personal; its music was played without accompaniment in courtship, healing, meditation, and spiritual rituals. Now it is played solo, with other instruments or vocals, or with backing tracks.[1] The flute has been used in Native American music, as well as other genres. There are two different types of Native American flute, the plains flute[2] and the woodlands flute,[3] each with slightly different construction.

There are many stories about how different Native American peoples discovered the flute. A common character in these stories is the woodpecker, who put holes in hollow branches while searching for termites. The wind would blow around these branches, creating sounds that the people noticed and eventually sought to recreate[4].

The actual development of the flute most likely did not follow this pattern. The most common theory is that it was developed by the Oasisamerica Ancient Pueblo Peoples, as the "Anasazi flute" that was based on the Mesoamerican flute designs from the south.[5][6]

The oldest extant Native American flute was collected by the Italian adventurer Giacomo Costantino Beltrami in 1823 on his search for the headwaters of the Mississippi River. It is now in the collection of the Museo Civico di Scienze Naturali in Bergamo, Italy[7].

The late 1960s saw a roots revival centered around the flute, with a new wave of flautists and artisans such as Doc Tate Nevaquaya, John Rainer, Jr., Sky Walkinstik Man Alone, and Carl Running Deer. Although the Native American Music category was eventually removed from the Grammy Awards roster in 2011 and no longer exists, Mary Youngblood was the only Native American flautist to win two awards during its tenure. Several other flutists were also nominated during it's course.

The Native American flute is the first flute in the world constructed with two air chambers – there is a wall inside the flute between the top (slow) air chamber and the bottom chamber which has the whistle and finger holes. The top chamber serves as a secondary resonator, which gives the flute its distinctive sound. There is a hole at the bottom of the "slow" air chamber and a (generally) square hole at the top of the playing chamber. A block (or "fetish") is tied on top of the flute. In a plains flute, a spacer is added or a channel is carved into the block itself to form a thin, flat air stream for the whistle hole (or "window"). In contrast, a woodlands flute has the channel carved into the top of the flute, allowing for a less reedy sound.[2][3]

Some modern flutes, called "drone" flutes (originally of Aztec origin) are two or more flutes built together. Generally, the drone chamber plays a fixed note which the other flute can play against in harmony. The drone may also change octaves as it resonates with the melody played on the adjacent flute.[citation needed]

Native American flutes can be made from various materials. Juniper, Redwood and Cedar are popular, as they provide a nice aroma. The soft woods are generally preferred by most flute players, because of the softer tones produced by the wood. Other harder woods such as walnut and cherry are appreciated for the clear, crisp, richness of sound that they can produce. Although traditionally flutes would be made from river cane, bamboo or a local wood, more exotic rain forest woods or even plastics and bamboo are now used.[2][3]

Commercially in the United States, only flutes crafted by enrolled Native American tribal members of a federally recognized tribe, or their approved artisans, are considered to be authentic "Native American flutes". It is illegal for any other manufacturer to connote Native origins, or to claim their Native American style flutes as "Native American made", per the 1990 Indian Arts And Crafts Act. This act makes such misrepresentation a Federal felony. Non-native makers must at least include such terms as "style" in descriptions of their wares.

Modern Native American flutes are generally tuned to a variation of the minor pentatonic scale, which gives the instrument its distinctive plaintive sound. Recently some makers have begun experimenting with different scales, giving players new melodic options. Also, modern flutes are generally tuned in concert keys (such as A or D) so that they can be easily played with other instruments. The root keys of modern Native American flutes span a range of about three and a half octaves, from C2 to A5[9].

Native American flutes most commonly have either five or six holes, but instruments can have anything from no holes to seven, including a thumb hole. Various makers employ different scales and fingerings for their flutes.[11]