Betula nana (Dwarf Birch) is a species of birch in the family Betulaceae, found mainly in the tundra of the Arctic region. 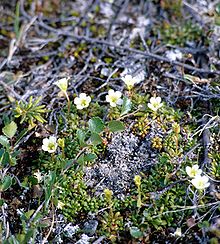 Diapensia lapponica with a branch of dwarf birch, Nunavut, July 1996

It is a shrub growing to 1-1.2 m high. The bark is non-peeling and shiny red-copper colored.[1] The leaves are rounded, 6-20 mm diameter, with a bluntly toothed margin. They become red in the autumn. The fruiting catkins are erect, 5-15 mm long and 4-10 mm broad.

B. nana is native to arctic and cool temperate regions of northern Europe, northern Asia and northern North America and it will grow in a variety of conditions.It can be found in Greenland. Outside of far northern areas, it is usually found only growing in mountains above 300 m, up to 835 m in Scotland and 2200 m in the Alps. Its eastern range limit is on Svalbard, where it is confined to warm sites.

There are two subspecies: