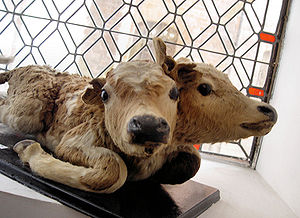 The term stems from the Greek τέρᾰς téras (genitive τέρᾰτος tératos), meaning monster or marvel, and λόγος lógos, meaning the word or, more loosely, the study of[1] .

As early as the 17th century, teratology referred to a discourse on prodigies and marvels of anything so extraordinary as to seem abnormal. In the 19th century, it acquired a meaning more closely related to biological deformities, mostly in the field of botany. Currently, its most instrumental meaning is that of the medical study of teratogenesis, congenital malformations or individuals with significant malformations. There are many pejorative terms that have historically been used to describe individuals with significant physical malformations. The term was popularized in the 1960s by Dr. David W. Smith of the University of Washington Medical School, one of the researchers who became known in 1973 for the discovery of Fetal alcohol syndrome.[2] With greater understanding of the origins of birth defects, the field of teratology now overlaps with other fields of basic science, including developmental biology, embryology, and genetics.

Birth defects are known to occur in 3-5% of all newborns.[3] They are the leading cause of infant mortality in the United States, accounting for more than 20% of all infant deaths. Seven to ten percent of all children will require extensive medical care to diagnose or treat a birth defect.[4] And although significant progress has been made in identifying the etiology of some birth defects, approximately 65% have no known or identifiable cause.[5]

It was previously believed that the mammalian embryo developed in the impervious uterus of the mother, protected from all extrinsic factors. However, after the thalidomide disaster of the 1960s, it became apparent and more accepted that the developing embryo could be highly vulnerable to certain environmental agents that have negligible or non-toxic effects to adult individuals.

Along with this new awareness of the in utero vulnerability of the developing mammalian embryo came the development and refinement of The Six Principles of Teratology which are still applied today. These principles of teratology were put forth by Jim Wilson in 1959 and in his monograph Environment and Birth Defects.[7] These principles guide the study and understanding of teratogenic agents and their effects on developing organisms:

Studies designed to test the teratogenic potential of environmental agents use animal model systems (e.g., rat, mouse, rabbit, dog, and monkey). Early teratologists exposed pregnant animals to environmental agents and observed the fetuses for gross visceral and skeletal abnormalities. While this is still part of the teratological evaluation procedures today, the field of Teratology is moving to a more molecular level, seeking the mechanism(s) of action by which these agents act. Genetically modified mice are commonly used for this purpose. In addition, pregnancy registries are large, prospective studies that monitor exposures women receive during their pregnancies and record the outcome of their births. These studies provide information about possible risks of medications or other exposures in human pregnancies.

Understanding how a teratogen causes its effect is not only important in preventing congenital abnormalities but also has the potential for developing new therapeutic drugs safe for use with pregnant women.

It is estimated that 10% of all birth defects are caused by prenatal exposure to a teratogenic agent.[5] These exposures include, but are not limited to, medication or drug exposures, maternal infections and diseases, and environmental and occupational exposures. Teratogen-caused birth defects are potentially preventable. Studies have shown that nearly 50% of pregnant women have been exposed to at least one medication during gestation.[8] An additional study found that of 200 individuals referred for genetic counseling for a teratogenic exposure, 52% were exposed to more than one potential teratogen.[9]

A wide range of different chemicals and environmental factors are suspected or are known to be teratogenic in humans and in animals. A selected few include:

The status of some of the above substances (e.g. diphenylhydantoin) is subject to debate, and many other compounds are under varying degrees of suspicion. These include Agent Orange,[10] nicotine,[11] aspirin and other NSAIDs. Other compounds are known as severe teratogens based on veterinary work and animal studies, but aren't listed above because they have not been studied in humans, e.g. cyclopamine. Teratogenic effects also help to determine the pregnancy category assigned by regulatory authorities; in the United States, a pregnancy category of X, D, or C may be assigned if teratogenic effects (or other risks in pregnancy) are documented or cannot be excluded.

Isotretinoin (13-cis-retinoic-acid; brand name Roaccutane), which is often used to treat severe acne, is such a strong teratogen that just a single dose taken by a pregnant woman may result in serious birth defects. Because of this effect, most countries have systems in place to ensure that it is not given to pregnant women, and that the patient is aware of how important it is to prevent pregnancy during and at least one month after treatment. Medical guidelines also suggest that pregnant women should limit vitamin A intake to about 700 μg/day, as it has teratogenic potential when consumed in excess.[12][13]

Exposure to teratogens can result in a wide range of structural abnormalities such as cleft lip, cleft palate, dysmelia, anencephaly, ventricular septal defect. Exposure to a single agent can produce various abnormalities depending on the stage of development it occurs. Specific birth defects are not characteristic of any single agent.

In botany, teratology investigates the theoretical implications of abnormal specimens. For example, the discovery of abnormal flowers—for example, flowers with leaves instead of petals, or flowers with staminoid pistils—furnished important evidence for the "foliar theory", the theory that all flower parts are highly specialised leaves.