NES Open Tournament Golf is a sports game developed and published by Nintendo for the Nintendo Entertainment System in 1991. NES Open Tournament Golf is the second Nintendo published golf-based video game released for the NES, the first game being Golf. In addition to the Famicom version of Golf, there were two other Nintendo published golf-based video games released in Japan. These games were released in disk format on the Family Computer Disk System in 1987. These two games were Family Computer Golf: Japan Course and Family Computer Golf: U. S. Course.

Like most Mario games released around the time, the first player played as Mario, and the second player played as Luigi. At certain points during gameplay, the Mario Bros. are offered advice by their caddies, Princess Peach and Princess Daisy.

NES Open Tournament Golf is often thought to be nearly identical to the Famicom version Mario's Open Golf based on the fact that they both feature identical graphics and gameplay. However there are many differences between the two games. For starters, Mario's Open Golf featured five playable courses whereas NES Open Tournament Golf only featured three. The background music between both games also differed, with the exception of few tracks that were used in both games.

The Famicom version, Mario's Open Golf is significantly more difficult than the NES version. Most of the holes seen in Mario's Open Golf are not in NES Open Tournament Golf, though there are a few holes that exist in both versions without any modifications. If someone plays Mario's Open Golf they will notice a handful of holes that look nearly identical the holes in NES Open Tournament Golf, but with more obstacles. It is likely that some of these obstacles were removed from the western release of the game to make it less difficult.

This is one of the few instances where a NES and Famicom versions of a game have varied so dramatically. Though these games both run on the same engine, mostly everything else is different. NES Open Tournament Golf feels more like a sequel as its release added many new features, such as the ability to earn prize money, which gave the game a lot of replay value.[original research?]

NES Open Tournament Golf is slated for release on the Nintendo 3DS Virtual Console on September 1 for ambassadors,[2] and may feature camera support, 3D support, or analog support. A demo was featured amongst other games from the Nintendo Entertainment System and SNES to be released for the 3DS on a tech demo called Classic Games at E3 2010.[3][4]

NES Open Tournament Golf featured three different courses. Those courses were the US Course, Japan Course, and the UK Course. Although the Japan Course and UK Course are also playable courses in Mario's Open Golf they do not contain the same holes. There are some holes in each course that are identical or nearly identical to holes found in NES Open Tournament Golf. For example, hole number one in the Australia Course is hole number nine in the US Course.

The player must play Stroke Play (not in a tournament) to be eligible to be promoted to the next rank. If they have played well enough, they will be offered the chance to move to the next level. This usually requires playing two 18 hole rounds. They start off as a beginner, after which they can progress to amateur, semi-professional, and professional. Their rank is displayed on the title screen.

In this mode the winner is determined by whoever wins the most holes. To win a hole the player must get a lower score than their opponent. If they and their opponent get the same amount of stokes on a hole, it results in a tie. At the end of all 18 holes whoever has won the most holes wins the match. If by the 18th hole there is still a tie, players will start back at the first hole until a winner is declared. The first challenger is Luigi, once the player has won a match against Luigi they will face off with four newly created characters:

In this mode players have the option of either playing Stroke Play or Match Play. Depending on the players rank and score for the round they will earn prize money. At the end of the round they will be shown a scoreboard. The ranks range from 1st to 37th place. The higher they rank for that round the more money they will win. Prize money can be viewed by selecting the Prize Money option in the Clubhouse. A record of the players total earnings is saved, even after the system is turned off.

In this mode you are able to toggle between several different options as well as view various game data.

In this mode players have the opportunity to unlock new courses which will also increase their rank. Initially there is only one course available to play, the Japan Course. After clearing this course you will be allowed to play the Australia Course. There are certain score requirements to accomplish before you are able to unlock the next course. Initially you will simply have to clear the Japan Course without going over +18. Below are a list of the score requirements for each course. The sixth course in the game is the Extra Course. It contains a mix of holes from all of the other courses. The Extra Course is available to play once you have cleared the Japan Course.

In this mode you may play against computer controlled opponents. There are three different opponents in this mode: Luigi, Tony, and Billy. You'll notice that the characters Steve and Mark do not appear in this version of the game, as they were created exclusively for NES Open Tournament Golf. Regardless of rank you may choose any of the three characters you wish to play against.

In this mode you are able to toggle between several different options as well as view various game data. 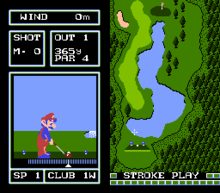 This game was released for the Disk System on February 21, 1987. Family Computer Golf: Japan Course is very similar to the original Golf which was released for the Famicom in 1984. In this version of the game you can consistently see the bird's eye view of the course on the right-side of the screen, while the left side of the screen consistently showed a third-person view. Two modes of play are available in the game, stroke play and match play. Though the course designs are similar to those found in NES Open Tournament Golf, the controls are slightly different. You can choose between three different speeds at which you hit the ball, and you can also cycle between golf clubs. In this version however, the default club will always be a 1W, whereas in later games an appropriate club would be pre-selected for you. The scorecard in this game is nearly identical to the one found in NES Open Tournament Golf.

This game came on a blue disk card, when most disk at the time were yellow. The blue disk indicated that it could be used in machines called a Disk Fax as part of a contest in Japan. Players high scores were saved on the disk, and by using the name entry feature in the game to enter their personal data, players could send the data to Nintendo using the Disk Fax. The winners of the contest received a golden disk containing a harder version of the game.[5]

This game was released for the Disk System on June 14, 1987. Family Computer Golf: U. S. Course is similar to the original Golf and Mario Open Golf. In this version of the game a bird's eye view of the course is shown on the center of the screen, while the right side of the screen shows a third-person view. Once you were ready to hit the ball the bird's eye view transitioned to a screen with just the third-person view. This concept was slightly modified and used in Mario Open Golf which was released in September 1991.

Mario's Open Golf was one of the titles released on Nintendo's arcade machine, the PlayChoice-10. Each machine had a mix of ten different NES games to choose from. For each token, players would be given a fixed amount of time to play any of the ten games on the PlayChoice-10. The dual-screen cabinet gave instructions on the top-screen, while the lower screen was used to show the actual game. The typical amount of time per token was 300 seconds, of which the player could switch in and out of different games if they so desired. The arcade machine's main circuit board had the ability to plug-in 10 different games, similar to the circuit board of an NES cartridge. PlayChoice games varied slightly from their original NES counterparts, as additional circuitry was needed to allow the game to run on the arcade machine.[6]

The PlayChoice-10 also featured the original Golf video game for the NES as one of the games in its library.