The population of Puerto Rico has been shaped by Amerindian settlement, European colonization, slavery, economic migration, and Puerto Rico's status as a United States Commonwealth.

The inhabitants of Puerto Rico immediately before the first European contact were part of the Arawak group of Amerindians. They called the island, Borikén (alt. Borinquén) and themselves "Boricuas". They were named by Christopher Columbus in 1493 as the Taíno.

The Spanish conquered the island, assuming government in 1508, colonized it, and enslaved the natives. The Taíno population dwindled due to disease, warfare, and forced labor, and the Spanish began importing large numbers of slaves from Africa. Spanish men arrived on the island disproportionately to Spanish women; Taíno women were sometimes forced to marry them, resulting in a mestizo, or "mixed" ethnicity.

During the late 19th century large numbers of immigrants from Spain, as well as numerous Spaniards living in former Spanish colonies in South America, also arrived in Puerto Rico (See Spanish immigration to Puerto Rico). European Catholics (and Christian Arabs) who were granted land from Spain during the Real Cedula de Gracias de 1815 (Royal Decree of Graces of 1815), were allowed to settle in the island with a certain amount of free land and enslaved persons.

This mass immigration during the 19th century helped the population grow from 155,000 in 1800 to almost a million at the close of the century. During the early 20th century Jews began to settle in Puerto Rico. The first large group of Jews to settle in Puerto Rico were European refugees fleeing German–occupied Europe in the 1930s. Puerto Rico's economic boom of the 1950s attracted a considerable number of Jewish families from the U.S. mainland, who were joined after 1959 by an influx of Jewish emigres from Castro's Cuba.[1]

Emigration has been a major part of Puerto Rico's recent history as well. Starting in the post-World War II period, due to poverty, cheap airfares, their U.S. citizenship, and promotion by the island government, waves of Puerto Ricans moved to the continental United States, particularly to New York City; Newark, Jersey City, Paterson, and Camden, New Jersey; Chicago; Providence, Rhode Island; Springfield and Boston, Massachusetts; Orlando, Miami and Tampa, Florida; Philadelphia, Pennsylvania; Hartford, Connecticut; Washington, D.C., and Los Angeles, California. This continued even as Puerto Rico's economy improved and its birth rate declined. Emigration continues at the present time, and this, combined with Puerto Rico's slumping below-replacement birth rate, suggests that the island's population will age rapidly and start to decline sometime within the next couple of decades. The 2010 Census in fact recorded Puerto Rico's first population drop in history. Other than the United States, there's Puerto Rican populations growing in Canada and the Dominican Republic.[2][unreliable source?][citation needed]

The word Nuyorican is sometimes used to describe Puerto Rican New Yorkers. The Spanish word for "Puerto Rican" is puertorriqueño.

The federal Naturalization Act, signed into law on March 26, 1790, by President Washington, explicitly barred anyone not of the White "race" from applying for U.S. citizenship. This law remained in effect until the 1950s, although its enforcement was tightened in the late 19th century regarding Asian immigrants, and by the Johnson-Reed act of 1924 imposing immigration quotas. In short, until the middle of the 20th century, only immigrants of the White "race" could hope to become naturalized citizens. This is how Puerto Rico came about being forced to become U.S citizens in 1917.[9][10]

Until 1950 the U.S. Bureau of the Census attempted to quantify the racial composition of the island's population, while experimenting with various racial taxonomies. In 1960 the census dropped the racial identification question for Puerto Rico but included it again in the year 2000. The only category that remained constant over time was white, even as other racial labels shifted greatly—from "colored" to "Black", "mulatto" and "other". Regardless of the precise terminology, the census reported that the bulk of the Puerto Rican population was white from 1899 to 2000.[4]

An interesting anecdote to consider was that during this whole period, Puerto Rico had laws like the Regla del Sacar or Gracias al Sacar where a person of mixed ancestry could be considered legally white so long as they could prove that at least one person per generation in the last four generations had also been legally white. Therefore people of mixed ancestry with known white lineage were classified as white, the opposite of the "one-drop rule" in the United States.[11][12]

As for maternal DNA, 61.1% of those sampled were found as having Amerindian maternal mtDNA. This means that if you could trace back in time from daughter to mother, you would eventually reach women who lived in Puerto Rico in Pre-Columbian time. The rest divides between 26.4% with female African ancestors and 12.5% with female European ancestors.[19]

Both of these findings are consistent with the popular belief from historical record that male European immigrants took for themselves wives from among the native Indian and, later, black slave populations.[20]

Dr. Juan Martinez Cruzado, a geneticist from the University of Puerto Rico Mayagüez who participated in the design of the mDNA study, said accounts of life on Puerto Rico in the 17th and 18th centuries "describe many aspects that are totally derived from Taino modus vivendi, not just the hammocks but the way they fished, their methods of farming, etc....It is clear that the influence of Taino culture was very strong up to about 200 years ago. If we could conduct this same study on the Puerto Ricans from those times, the figure would show that 80 percent of the people had Indian heritage."

Women in the diaspora

In a study done on Puerto Rican women born on the island but living in New York by Carolina Bonilla, Mark D. Shriver and Esteban Parra in 2004, the ancestry proportions corresponding to the three parental populations were found to be 53.3±2.8% European, 29.1±2.3% West African, and 17.6±2.4% Native American based on autosomal ancestry informative markers. Although autosomal markers tests seem to draw a more broad picture than that of single, gender-based mtDNA and Y-Chromosome tests, the problem with autosomnal DNA is in the archaic cateogries used: "European", "Sub-Saharan African", "East Asian" & "Native American". "Asian" (South, North or East) & "North African" are not included. These generalised categories may not take into account the complexity of migratory patterns across the Old World.

These findings are consistent with the historical record that the native male Taino population was virtually wiped out shortly after the arrival of the European settlers to the Island.[20] 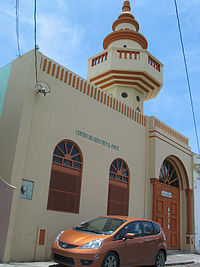 Islamic Center at Ponce: There are many religious beliefs represented in the island

The Roman Catholic Church has been historically the most dominant religion of the majority of Puerto Ricans, with Puerto Rico having the first dioceses in the Americas.[24]

The presence of various Protestant denominations has increased under American sovereignty, making modern Puerto Rico an interconfessional country. Protestantism was suppressed under the Spanish regime, but encouraged under American rule of the island. An example of this was with the Holy Trinity Anglican church in Ponce, which was prevented from ringing its bell until 1898, when American troops landed there.[25]

In 2007, there were over 5,000 Muslims in Puerto Rico, representing about 0.13% of the population.[26][27][dead link] There are eight Islamic mosques spread throughout the island, with most Muslims living in Río Piedras.[28][29] Puerto Rican converts to Islam continues to occur.[30] "Ties between Latinos and Islam are more than just spiritual, but date back to Spanish history. Many people do not realize that Muslims ruled Spain for more than 700 years".[31] And at times not just individuals, but whole families convert. However, lack of Muslim education in the Island forces some Puerto Rican Muslims to migrate to the States.[31] Islam was brought into Puerto Rico mainly via the Palestinian migration of the 1950s and '60s.[32] Thus, today there is a strong Palestinian presence among Muslims in Puerto Rico. "They are economically strong and are thus able to pay for a full time Imaam".[33]

Puerto Rico is also home to the largest Jewish community in the Caribbean with 3,000 Jewish inhabitants. Some Puerto Ricans have converted, not only as individuals but as entire families. Puerto Rico is the only Caribbean island in which the Conservative, Reform and Orthodox Jewish movements are represented.[1][34]

Taíno religious practices have to a degree been rediscovered/reinvented by a handful of advocates. Various African religious practices have been present since the arrival of enslaved Africans. In particular, the Yoruba beliefs of Santería and/or Ifá, and the Kongo-derived Palo Mayombe (sometimes called an African belief system, but rather a way of Bantu lifestyle of Congo origin) find adherence among very few individuals who practice some form of African traditional religion. 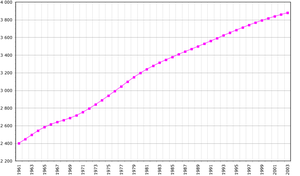 Demographics of Puerto Rico, Data of FAO, year 2005 ; Number of inhabitants in thousands.

Religions: Roman Catholic 85%, Protestant and other 15%