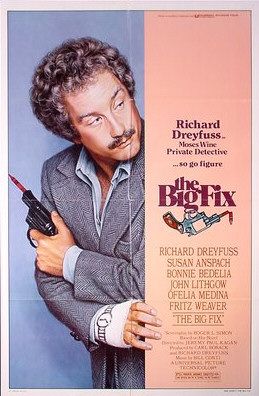 "The Big Fix" is a 1978 film directed by and based on the novel by , who also wrote the screenplay. It starred as private detective Moses Wine and co-starred and . "The Big Fix" had no relationship to the 1947 movie of the same name.

A former 1960s student turned searches for missing Berkeley activist with whom he shared the barricades. Moses Wine is contacted by Lila, an old flame back from his radical college days. She wants him to work for Miles Hawthorne, who is a candidate running for . Moses is told that a flyer is being distributed around the state with a doctored photo of Hawthorne with a 1960s radical named Howard Eppis &mdash; a fugitive who had been convicted in absentia for inciting violence against the government &mdash; falsely claiming that Eppis is supporting him for governor. This is a clear attempt to destroy Hawthorne's chances for being elected. Moses sets out to find out who is responsible &mdash; with deadly results.