Lata Mangeshkar (Marathi: लता मंगेशकर; born September 28, 1929) is a singer from India. She is one of the best-known and most respected playback singers in India.[1][2] Mangeshkar's career started in 1942 and has spanned over six and a half decades. She has recorded songs for over a thousand Hindi films and has sung songs in over thirty-six regional Indian languages and foreign languages, though primarily in Hindi. She is the elder sister of singer Asha Bhosle, and Hridayanath Mangeshkar, Usha Mangeshkar and Meena Mangeshkar. She is the second vocalist to have ever been awarded the Bharat Ratna, India's highest civilian honour.[3]

Mangeshkar was featured in the Guinness Book of World Records from 1974 to 1991 for having made the most recordings in the world. The claim was that she had recorded approximately 25,000 solo, duet, and chorus-backed songs in 20 Indian languages between 1948 to 1974. Over the years, while several sources have supported this claim, others have raised concerns over its veracity, claiming that this number was highly exaggerated and that Mangeshkar's younger sister, Asha Bhosle, had more song recordings than she had.[4][5] In 2011 Guinness officially acknowledged Bhosle as the most recorded artist in music history.[6]

Lata Mangeshkar was born in Sikh Mohalla,[7] Indore, in the Central India Agency (now part of Madhya Pradesh). Her father, Pandit Deenanath Mangeshkar who belonged to a Gomantak Maratha Samaj family from Goa, was a classical singer and theater actor. Her mother Shevanti (Shudhamati) who was from Thalner, Maharashtra, was Deenanath's second wife. The family's last name used to be Hardikar; Deenanath changed it to Mangeshkar in order to identify his family with his native town, Mangeshi in Goa. Lata was named "Hema" at her birth. Her parents later renamed her Lata after a female character, Latika, in one of her father's plays, BhaawBandhan.[8] Lata is the eldest child of her parents. Meena, Asha, Usha and Hridayanath are her siblings in sequence.

Mangeshkar took her first lessons from her father. At the age of five, she started to work as an actress in her father's musical plays (Sangeet Natak in Marathi). On the first day in the school, she started teaching songs to other children. When the teacher stopped her, she was so angry that she stopped going to the school.[8] Other sources cite that she left school because they would not allow her to bring Asha with her, as she would often bring her younger sister with her.

In 1942, when Mangeshkar was 13, her father died of heart disease. Master Vinayak (Vinayak Damodar Karnataki), the owner of Navyug Chitrapat movie company and a close friend of the Mangeshkar family, took care of them.

After Vinayak's death in 1948, music director Ghulam Haider mentored her as a singer. Haider introduced Mangeshkar to producer Sashadhar Mukherjee, who was working then on the movie Shaheed (1948), but Mukherjee dismissed Mangeshkar's voice as "too thin."[8] An annoyed Haider responded that in the coming years the producers and the directors would "fall at Lata's feet" and "beg her" to sing in their movies. Haider gave Lata her first major break with the song “Dil Mera Toda,” from the movie Majboor (1948).[8]

Initially, Mangeshkar is said to have imitated Noor Jehan, but later she developed her own style of singing.[8] Lyrics of songs in Hindi movies are primarily composed by Urdu poets and contain a higher proportion of Urdu words, including the dialogue. Actor Dilip Kumar once made a mildly disapproving remark about Mangeshkar's Maharashtrian accent while singing Hindi/Urdu songs; so for a period of time, Lata took lessons in Urdu from an Urdu teacher named Shafi.[9]

“Aayega Aanewaala,” a song in the movie Mahal (1949) was composed by music director Khemchand Prakash and lip-synced on screen by actress Madhubala. 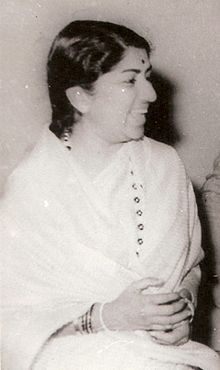 Mangeshkar as a young woman

On June 27, 1963, against the backdrop of the Sino-Indian War, Mangeshkar sang the patriotic song "Aye Mere Watan Ke Logo" (literally, "Oh, People of My Country") in the presence of Jawaharlal Nehru, the then Prime Minister of India. The song, composed by C. Ramchandra and written by Pradeep, is said to have brought the Prime Minister to tears.[8][10]

The 1960s also witnessed the beginning of Mangeshkar's association with Laxmikant-Pyarelal, the music directors for whom she sang the most popular songs in her career. She sang for Parasmani (1963) which was their first film together.

Lata Mangeshkar's most notable songs in 1970s were composed by Laxmikant-Pyarelal (Laxmi-Pyare) and Rahul Dev Burman[citation needed]. She recorded several songs composed by Laxmi-Pyare in 1960s and 1970s, many of them written by the lyricist Anand Bakshi. She also recorded many hit songs with Rahul Dev Burman in the films Amar Prem (1972), Caravan (1971), Kati Patang(1971), and Aandhi (1975). The two are noted for their songs with the lyricists Majrooh Sultanpuri, Anand Bakshi and Gulzar.

From 1970s onwards, Lata Mangeshkar has also staged many concerts in India and abroad, including several charity concerts. Her first concert overseas was at the Royal Albert Hall, London, in 1974. She also released an album of Mirabai's bhajans, Chala Vaahi Des, composed by her brother Hridayanath Mangeshkar. Some of the bhajans in the album include "Saanware Rang Raachi" and "Ud Jaa Re Kaaga". In the early 70s, she released other non-film albums, such as her collection of Ghalib ghazals, an album of Marathi folk songs (koli-geete), an album of Ganesh aartis (all composed by her brother Hridaynath) and an album of abhangs of Sant Tukaram composed by Shrinivas Khale.

In late 1970s and early 1980s, she worked with the children of composers she had earlier worked with. Some of these composers included Rahul Dev Burman (son of Sachin Dev Burman), Rajesh Roshan (son of Roshan), Anu Malik (son of Sardar Malik), and Anand-Milind (sons of Chitragupt).

From 1980s onwards, Lata Mangeshkar worked with music directors including Shiv-Hari, Ram Laxman, and A. R. Rahman. She recorded some non-film songs, including ghazals with Jagjit Singh.

In 1990, Mangeshkar launched her own production house for Hindi movies which produced the Gulzar-directed movie Lekin.... She won her third National Film Award for Best Female Playback Singer for her rendition of the song "Yaara Sili Sili" from the film, which was composed by her brother Hridayanath. During the 1990s, she recorded with music directors including Jatin-Lalit and Nadeem-Shravan. She has sung for Rajshri Productions, including Maine Pyar Kiya (1989) and Hum Aapke Hain Kaun (1994).

In 1999, Mangeshkar was nominated as a member of Rajya Sabha.[12] However, she did not attend the Rajya Sabha sessions regularly, inviting criticism from several members of the House, including the Deputy Chairperson Najma Heptullah, Pranab Mukherjee and Shabana Azmi.[13][14] She stated the reason for her absence as ill-health; it was also reported that she had not taken a salary, allowance or a house in Delhi for being a Member of Parliament.[13][15]

In 2001, Lata Mangeshkar was awarded Bharat Ratna, India's highest civilian honor. In the same year, she established the Master Deenanath Mangeshkar Hospital in Pune, managed by the Lata Mangeshkar Medical Foundation (founded by the Mangeshkar family in October 1989). In 2005, she designed a jewellery collection called Swaranjali, which was crafted by Adora, an Indian diamond export company. Five pieces from the collection raised £105,000 at a Christie's auction, and a part of the money was donated for the 2005 Pakistan earthquake relief.[16] Also in 2001, she recorded her first Hindi song with the composer Ilaiyaraaja, for the film Lajja; she had earlier recorded Tamil and Telugu songs composed by Ilaiyaraaja.

Lata Mangeshkar's song "Wada Na Tod" is in the film Eternal Sunshine of the Spotless Mind (2004) and on the film's soundtrack.

On June 21, 2007, she released an album Saadgi, featuring eight ghazal-like songs written by Javed Akhtar and composed by Mayuresh Pai.[17]

In 1974, The Guinness Book of Records listed Lata Mangeshkar as the most recorded artist in the history, stating that she had reportedly recorded "not less than 25,000 solo, duet and chorus backed songs in 20 Indian languages" between 1948 and 1974. Her record was contested by Mohammed Rafi, who was claimed to have sung around 28,000 songs.[4][22] After Rafi's death, in its 1984 edition, the Guinness Book of World Records stated Lata Mangeshkar's name for the "Most Recordings", but also stated Rafi's claim. The later editions of Guinness Book stated that Lata Mangeshkar had sung no fewer than 30,000 songs between 1948 and 1987.[23]

Although the entry has not been printed in Guinness editions since 1991, several sources claim that she has recorded thousands of songs, with estimates ranging up to figures as large as 50,000.[24][25] However, even the earliest Guinness claim of 25,000 songs (between 1948–1974) was claimed to be exaggerated by several other sources, with one of them stating that the number of songs sung by Lata Mangeshkar in Hindi films till 1991 was found to be 5250.[26][27][28] Mangeshkar herself stated that she does not keep a record of the number of songs recorded by her, and that she did not know from where Guinness Book editors got their information.[29] In 2011 Bhosle was officially acknowledged by Guinness as the most recorded artist in music history, surpassing Mangeshkar.[6]