The station is on Huddersfield Line, is operated by Northern Rail, and is 5 miles (8 km) south west of Leeds. The station is at one end of the 4,320-yard (3.95 km) long Morley Tunnel, which goes underneath the town.

Patronage at Morley station has increased remarkably in recent years, and this is reflected by annual figures published by the Office of Rail Regulation.[1] Recorded usage in 2002/03 was 27,296 journeys per year (average of entries and exists). By 2005/06, this had increased to 68,664 journeys per year, an increase of 252% in four years. Actual growth may be higher since the ORR data does not accurately take account of the multi-modal 'MetroCard' season tickets issued by West Yorkshire Passenger Transport Executive that are valid for journeys to and from this station. 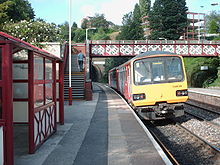 The increase in recorded and actual passengers, combined with growth elsewhere on the line, means that overcrowding in the morning peak for commuters heading towards Leeds is now a serious problem.[2]

Despite commuter growth, very little has been done to bring this station into the 21st century. For example there is no visual live passenger information[3], not all platforms are accessible for disabled passengers[4], insufficient parking[3], access routes to the station often overgrown with weeds, and frequent drainage problems[5] which all combine to make the station not as pleasant as other stations in West Yorkshire. The local newspaper Morley Observer & Advertiser stated on 12 January 2011 that plans are now in place to update the station, starting with the installation of CCTV.[6] This was later installed.

Morley railway station has neither a taxi rank nor a cab office in the vicinity.[8] As the only real option for mobility-impaired passengers travelling to or from the station is by taxi, the cost and the waiting time easily negate the respective money and time that may have been saved by travelling by train.[9]

The hourly Huddersfield service continues into the late evening, and runs every two hours on Sundays. The Manchester Victoria service ends after the afternoon rush and does not run on Sundays, necessitating a change of train at Dewsbury or Huddersfield to reach Manchester.[11]

Express trains operated by First TransPennine Express between Leeds and Manchester Piccadilly via Huddersfield pass through Morley, but do not stop. To use these services, it is necessary to travel to Dewsbury or Huddersfield on the local trains, and change.

Morley railway station does not have a ticket office;[3] passengers are able to purchase tickets on the train from the conductor. This presents a problem at peak times, as one person cannot possibly sell tickets to every passenger on a crowded train; passengers travelling into Leeds therefore have to queue up at the excess fares kiosk in Leeds to purchase tickets on arrival, in order to pass through the ticket barriers. It is, however, possible to buy tickets to or from Morley in the usual way at any manned station, with the nearest manned stations being Dewsbury and Leeds. It is also possible to buy tickets in advance online, but note that there is no facility to collect tickets from Morley, and opting to have tickets mailed may incur an additional charge.

An alternative is to purchase a 'MetroCard' season ticket offered by West Yorkshire Passenger Transport Executive. As Morley is in Zone 2,[12] all MetroCard tickets[13] that include rail travel are valid at Morley. National Rail also offers a wide selection of rail-only season tickets allowing unlimited travel between Morley and another named station.

West Yorkshire residents who hold a Metro-issued Concessionary Pass are entitled to purchase a ticket for any rail journey wholly within West Yorkshire for 50p after the morning peak.[14] As this can be combined with a standard ticket beyond West Yorkshire, longer journeys can also be made slightly cheaper. For example, travelling from Morley to Manchester Victoria costs significantly less by travelling to Todmorden on the concessionary rate, leaving only the relatively short Todmorden to Manchester journey to be paid for.

Morley railway station was opened by the LNWR in 1848 as "Morley Low station", due to its low lying location.[15]

The town's other station (known as "Morley Top"), which was situated nearer to the town centre and served by trains on the GNR Bradford to Ardsley line, was closed by British Rail in January 1961.[16]

In 2003, plans were in place to upgrade Morley station's facilities by introducing cycle stands, CCTV, and improvements to the car park[17]. As only one platform is accessible to mobility-impaired users, Morley Town Council lobbied (unsuccessfully) to have the upgrade include the installation of wheelchair ramps to platform 2.[18] Only the cycle stands were completed at that time. In January 2011, plans were laid out once again for CCTV cameras to be installed, and these were installed in the following months.[6]