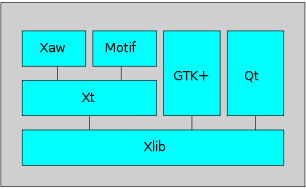 In computing, Motif refers to both a graphical user interface (GUI) specification and the widget toolkit for building applications that follow that specification under the X Window System on Unix and other POSIX-compliant systems. It emerged in the 1980s as Unix workstations were on the rise, as a competitor to the OPEN LOOK GUI. It is now the basic building block of the Common Desktop Environment.

The IEEE 1295 standard defines the Motif API.[1] As of version 2.1 Motif supports Unicode, which has made it widely used in several multilingual environments.

The Motif look and feel is distinguished by its use of square, chiseled, three-dimensional effects for its various user interface elements — menus, buttons, sliders, text boxes, and the like. Motif's operation was designed to correspond closely with the then-familiar Microsoft Windows and OS/2's Presentation Manager interfaces, and Microsoft played a key role in designing the original style guide.

Motif was created by the Open Software Foundation (and was sometimes even called OSF/Motif), which has now been subsumed by The Open Group.

There are a few implementations of the Motif API. Motif the toolkit is the first. There is also Open Motif which is a release of the "original" Motif under more liberal licensing terms. Finally, the LessTif project aims to implement the API under the LGPL license.