Geography of the Philippines

Geography of the Philippines 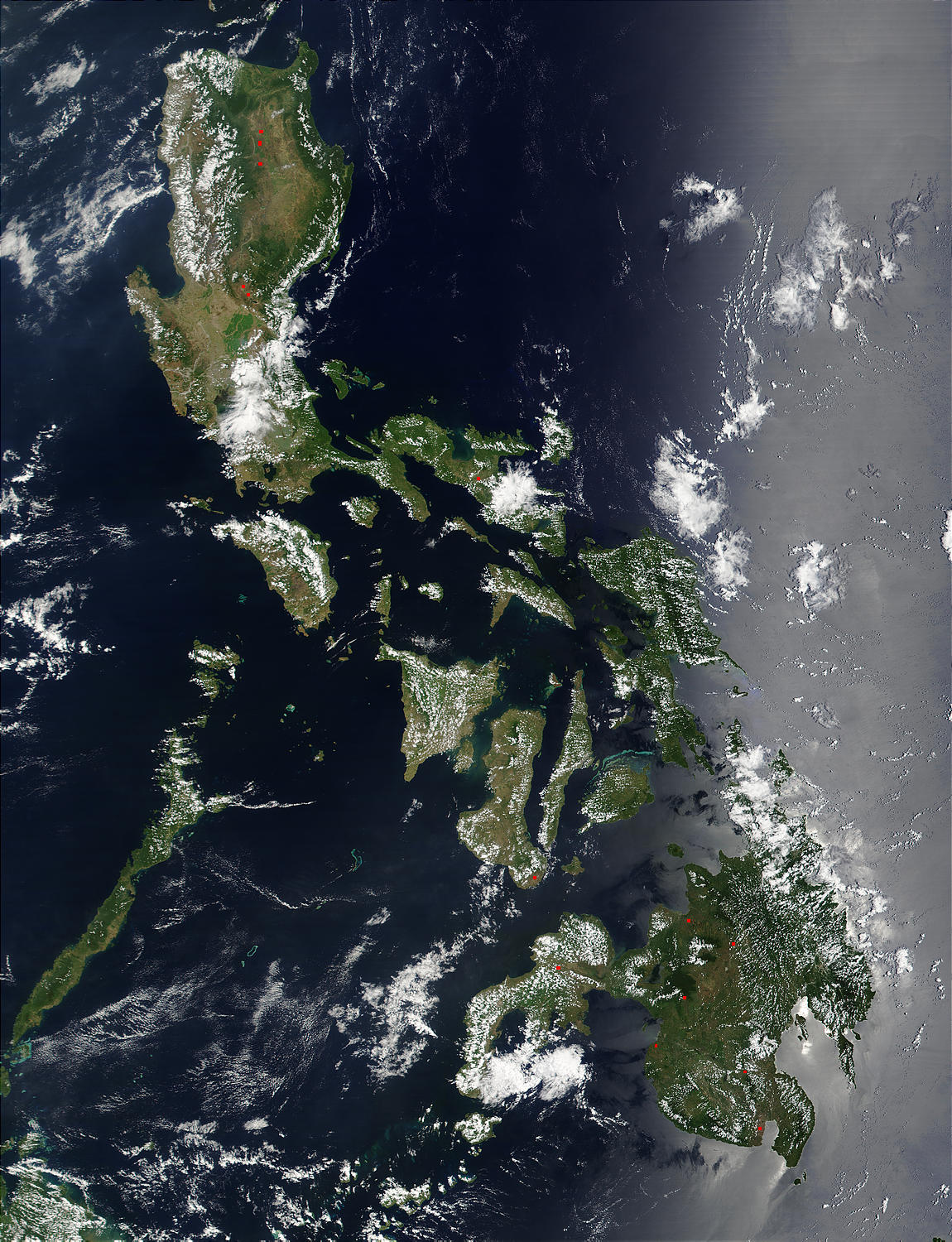 The islands are divided into three groups: , , and . The Luzon islands include Luzon itself, , , and ,,. The Visayas is the group of islands in the central Philippines, the largest of which are: Panay, , Cebu, , Leyte and Samar. The Mindanao islands include Mindanao itself, plus the , composed primarily of , , and .

The Philippine archipelago lies in Southeast Asia in a position that has led to its becoming a cultural crossroads, a place where Malays, Arabs, Chinese, Spaniards, Americans, Japanese and others have interacted to forge a unique cultural and racial blend. The archipelago numbers some 7,107 islands and the nation claims an (EEZ) of convert|200|nmi|km from its shores. The Philippines occupies an area that stretches for 1,850 kilometers from about the fifth to the twentieth parallels north latitude. The total land area is slightly more than 300,000 square kilometers. Only approximately 1,000 of its islands are populated, and fewer than one-half of these are larger than 2.5 square kilometers. Eleven islands make up 95 percent of the Philippine landmass, and two of these — Luzon and Mindanao — measure 105,000 and 95,000 square kilometers, respectively. They, together with the cluster of the Visayan Islands that separate them, represent the three principal regions of the archipelago that are identified by the three stars on the . Topographically, the Philippines is broken up by the sea, which gives it one of the longest coastlines of any nation in the world. Most Filipinos live on or near the coast, where they can easily supplement their diet from approximately 2,000 species of fish.

Off the coast of eastern Mindanao is the Philippine Trough, which descends to a depth of 10,430 meters. The Philippines is part of a western Pacific arc system that is characterized by active volcanoes. Among the most notable peaks are near , south of , and on Mindanao. All of the Philippine islands are prone to earthquakes. The northern Luzon highlands, or Cordillera Central, rise to between 2,500 and 2,750 meters, and, together with the Sierra Madre in the northeastern portion of Luzon and the mountains of Mindanao, boast rain forests that provide refuge for numerous upland tribal groups. The rain forests also offer prime habitat for more than 500 species of birds, including the (or monkey-eating eagle), some 800 species of orchids, and some 8,500 species of flowering plants.

The country's most extensive river systems are the , which flows into the (Rio Grande de Mindanao); the Agusan, in Mindanao which flows north into the ; the Cagayan in northern Luzon; and the Pampanga, which flows south from east Central Luzon into . , east of Manila Bay, is the largest freshwater lake in the Philippines. Several rivers have been harnessed for hydroelectric power.

To protect the country's biological resources, the government has taken a first step of preparing a to address conservation of threatened .

The Philippines is divided into 178,000 regions with all provinces grouped into one of 16 regions for administrative convenience. The National Capital Region however, is divided into four special districts.

Most government offices establish regional offices to serve the constituent provinces. The regions themselves do not possess a separate local government, with the exception of the .

A province is one that has no coastline, meaning no access to or . There are 16 provinces in the Philippines:

Similarly, Laguna and of Calabarzon (Region IV-A) have coastlines on Laguna de Bay. Since lakes do not allow access to seaborne trade, these provinces are still considered to be landlocked.

An completely surrounded by water, is the opposite of a landlocked one. There are 15 island provinces in the Philippines:

In , an is a territory or part of a territory (usually a country) lying wholly within the boundaries of another, and an is one which is politically attached to a larger piece but not actually contiguous with it. Many entities are both enclaves and exclaves, but the two are not synonymous.

A is a point on the Earth that touches four distinct regions. Such points are often called "four corners", from the corners of the four regions meeting there.

Four distinct geographic divisions converging at a single point is not uncommon in the Philippines, and there are other points of convergence between five or more divisions that can be found.

*The municipalities of Basey and Marabut, ; and Balangkayan, Llorente, Balangiga and Lawaan, .

* The cities of Ligao, Legazpi and Tabaco, and the municipalities of Guinobatan, Camalig, Daraga, Malilipot, Sto. Domingo, in the province of meet on the crater of .

Plaza Rizal in Naga City is claimed by the province of , its home province. The belonged to the city (formerly Nueva Caceres) when it was the capital of . A new capitol was constructed in when Camarines Sur was created.

The island of lies exactly at the center of the Philippine archipelago.

The Philippines has a tropical marine climate dominated by a rainy season and a dry season. The summer monsoon brings heavy rains to most of the archipelago from May to October, whereas the winter monsoon brings cooler and drier air from December to February. Manila and most of the lowland areas are hot and dusty from March to May. Even at this time, however, temperatures rarely rise above 37 °C. Mean annual sea-level temperatures rarely fall below 27 °C. Annual rainfall measures as much as 5,000 millimeters in the mountainous east coast section of the country, but less than 1,000 millimeters in some of the sheltered valleys.

Monsoon rains, although hard and drenching, are not normally associated with high winds and waves. But the Philippines sit astride the typhoon belt, and it suffers an annual onslaught of dangerous storms from July through October. These are especially hazardous for northern and eastern Luzon and the and regions, but Manila gets devastated periodically as well.

In the last decade, the Philippines has been hit severely by natural disasters. In 2005 alone, Central Luzon was hit by both a drought, which sharply curtailed hydroelectric power, and by a typhoon that flooded practically all of low-lying Manila's streets. Still more damaging was the 1990 earthquake that devastated a wide area in Luzon, including Baguio and other northern areas. The city of Cebu and nearby areas were struck by a typhoon that killed more than a hundred people, sank vessels, destroyed part of the sugar crop, and cut off water and electricity for several days. The Philippines is prone to about 18-21 typhoons per year. Of course the 1991 eruption also damaged much of Central Luzon, the lahar burying towns and farmland, and the ashes affecting global temperatures.

Building construction is undertaken with natural disasters in mind. Most rural housing has consisted of nipa huts that are easily damaged but are inexpensive and easy to replace. Most urban buildings are steel and concrete structures designed (not always successfully) to resist both typhoons and earthquakes. Damage is still significant, however, and many people are displaced each year by typhoons, earthquakes, and other natural disasters. In 1987 alone the Department of Social Welfare and Development helped 2.4 million victims of natural disasters.

Many volcanoes in the country are active, the most recent eruption being that of on Luzon in 1991. is another of the active volcanoes and has the world's most perfectly-shaped cone. Mayon has a violent history of 47 eruptions since 1616 and another violent eruption is currently feared. , also located on Luzon, is one of the .

Most of the islands used to be covered by tropical rainforests. However, illegal logging has reduced forest cover to less than 10% of the total land area.

The Batanes And Babuyan Islands

The Batanes and are found on the Luzon Strait north of the Philippines facing Taiwan. It contains the northernmost point of land, the islet of Y'Ami in the Batanes Islands, separated from Taiwan by the Bashi Channel (c.50 mi/80 km wide).

The Cordilleras and Caraballos, together with the Sierra Madre Range, form the main mountain system in Northern Luzon.

The Caraballos (Caraballo de Baler) start where the Sierra Madre and the Cordilleras meet. They are found south of Cagayan Valley, northeast of the Central Luzon Plains.

This region is where the capital of the Philippines is located. Large rivers from bays and mountain springs traverse the plain. In the Northern part of the region, that is, Manila and Rizal, most of the plain has been converted into cities, and are thus industrialized. The plain harbors the largest inland freshwater lake in Southeast Asia, the .

The Mindoro mountain range begins with Mount Halcon and is further divided into 3. The northwest ends at Calavite Point and is a landmark for ships. The east originates from Lake Naujan and the west follows Mindoro Strait.

Located to the west of Palawan. "Kalayaan" is a Tagalog word meaning "freedom". "see "

This peninsula is connected to mainland Luzon by the isthmus of Tayabas. Provinces occupying Bicol Peninsula are the provinces Camarines Norte, Camarines Sur, Albay, Sorsogon and some municipalities of Quezon Province.

The Leyte-Samar-Biliran corridor is the only bridged major islands in the country, enabling vehicular transport to any point in these islands. Leyte is connected to Samar by the and Biliran is connected to Leyte by the Biliran Bridge. Forming the easternmost islands of the Visayas, the islands are generally characterized with central mountain ranges with gently rolling terrain sloping to the coastal plains. The climate is generally "Af" (tropical rainforest) in the Koppen system, described as a climate with rainfall evenly distributed throughout the year. These islands are politically grouped into the region.

Zamboanga Peninsula has a very mountainous terrain this chain of mountain ranges is called the Zamboanga Cordilleras. The highest mountain in this range is Mt. Dapia, which is 2,617 meters (8,586 ft) high.

Ten largest cities
The following is a list of the ten largest cities in the country in terms of population, with their population according to the 2000 census. Component cities and municipalities of Metro Manila and Metro Cebu are taken as one to show the extent of .

* [http://www.tourism.gov.ph/explore Government Portal of the Republic of the Philippines ]