Geographically, Siberia includes the Russian Urals, Siberian, and Far Eastern Federal Districts. The north-central parts of Kazakhstan are sometimes included in the region.

Excluding territories of north-central Kazakhstan, Siberia thus has a total population of ca. 38.7 million (2005). The North Kazakhstan oblast has another 1.1 million inhabitants (2002). 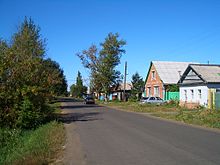 Cherlak, a typical small town - or a large village - in Western Siberia

The above count, however, by including the entire Urals Federal District, includes areas not usually considered part of Siberia, e.g. the cities Yekaterinburg and Chelyabinsk and Nizhny Tagil listed above.

Mongolian, Turkic and Manchu-Tungus languages are sometimes taken together under the term Altaic. At one time Uralic and Altaic were believed to form the Ural–Altaic group, though this theory has now been largely discarded. The proposed Uralo-Siberian family combines the Uralic family with the Yukaghir languages, Chukotko-Kamchatkan, and Eskimo–Aleut. These are more umbrella terms than accepted linguistic relationships. Ket has recently been linked with the Na-Dene languages into a Dené–Yeniseian group; while not universally accepted a broad consensus in favor of the proposal has emerged.