Devprayag (Devaprayāg) (Devanagari: देव प्रयाग) is a town and a nagar panchayat (municipality) in Tehri Garhwal district[1][2] in the state of Uttarakhand, India, and is one of the Panch Prayag (five confluences) of Alaknanda River and where the Ganges River is formed.

Traditionally, it is considered to be the place where sage Devasharma led his ascetic life, giving birth its present name, Devprayag. It is one of the five sacred confluences in the hills and is an important place of pilgrimage for devout Hindus.[3]

"Devaprayaga" means "Holy Confluence" in Sanskrit. As per Hindu Scriptures, Devaprayaga is the sacred event of merging two heavenly rivers, Alakananda and Bhagirathi, to form the holy Ganga.

On a terrace in the upper part of the village is the temple of Raghunathji, built of huge stones, pyramidal in form and capped by a white cupola.

Devprayag is the home of the late Acharya Shri Pt. Chakradhar Joshi (a scholar in Astronomy and Astrology) who established Nakshatra Vedh Shala (an observatory) in the year 1946. This is located on a mountain called Dashrathanchal at Devprayag. The observatory is well equipped with two telescopes and many books to support research in astronomy. It also contains about 3000 manuscripts from 1677 AD onwards collected from various parts of country. Apart from the latest equipment, it also has the ancient equipment like Surya Ghati, Jal Ghati and Dhruv Ghati which showcase the pride of Bharatiya progress in the field of astronomy. Shri Dr. Prabhakar Joshi and Acharya Shri Bhaskar Joshi (Popularly known as Guruji) are currently in charge and caretakers of the observatory.

Devprayag is full of natural beauty. Other than Sangam and Raghunath Ji Temple in Devprayag, one can visit nearby sacred places like Danda Naggaraja (Lord of Snakes) temple and Chandrabadni temple.

The Alaknanda rises at the confluence and feet of the Satopanth and Bhagirath Kharak glaciers in Uttarakhand. The headwaters of the Bhagirathi are formed at Gaumukh, at the foot of the Gangotri glacier and Khatling glaciers in the Garhwal Himalaya. These two sacred rivers join to form the Ganges (Ganga) in Devprayag.

Devprayag is 70 km from Rishikesh. Devprayag has an average elevation of 830 metres (2,723 feet). 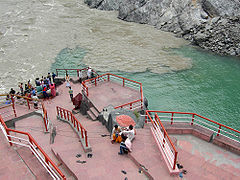