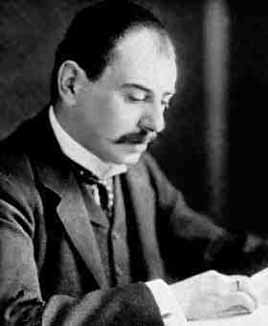 Edmund Landau was born in to a wealthy ish family. His father was Leopold Landau, a gynecologist. His mother was Johanna Jacoby from a well known German banking family. Landau studied at the andreceived his doctorate in 1899 and his (the post-doctoralqualification required in German universities) in 1901.

Landau taught at the University of from 1899 until 1909 and helda chair at the from 1909 until he was forced outby the Nazi regime in 1933. Thereafter he lectured only outside ofGermany.

In 1903 Landau gave a much simpler proof than was then known of the
and later presented the first systematictreatment of in the "Handbuch der Lehre von der Verteilung des Primzahlen", or simply the "Handbuch". He also made important contributionsto .

Hardy wrote that no one was ever more passionately devoted to mathematics than Landau. This is amply evidenced by his small book on the axiomatic foundations of analysis and two very important books on number theory.